Not a Tolkien quote: “A single dream is more powerful than a thousand realities.” TThnsdwohatdw, Part 3.

A single dream is not

In my on-going series Things J.R.R. Tolkien has never said, done, written or had anything to do with (TThnsdwohatdw) I present you with another misattributed quote: “”A single dream is more powerful than a thousand realities.” No, it is not by J.R.R. Tolkien but by someone else and I will get to this in a moment – but honestly, people. Even if JRRT had had a really sappy bad day he would not have written something like this. Please read the Biography, Letters, at least his three major works The Hobbit, The Lord of the Rings and The Silmarillion – and you will realise he would never have written a line like this. Disney would have. And has done so, in a sense.

However, if this is not a quote by the man himself where does it come from? I mean, even WETA Workshop has used it and they should know a thing or two on Tolkien, right?

Well, the thing is they are film makers to a 100% – and beyond. And someone in their art department will have heard of Tom Jung, one of the most famous film poster designers in history. I mean, Peter Jackson collects old film posters (anyone who has seen the Hobbit sneak peek will have noticed his collection.) And Tom Jung is a master of his art – he is responsible, for example, for the iconic Star Wars film posters (the real, old ones, not the crappy new ones.) When he was asked to do a version for the 1978 Ralph Bakshi version of The Lord of the Rings he produced an outstanding piece of art I had on my childhood bedroom wall for years (yes, it’s true!)

Unfortunately, someone wrote some major baloney as well onto the painting (that’s marketing for you and those guys haven’t learned anything ever since, thank you very much.)

One man cast a lingering spell of awe and wonder, of magical innocence overcoming evil, of simple courage conquering fear – he gave us the legend that will live forever in our minds.

J.R.R. Tolkien triumphed with the perception that a single dream is more powerful than a thousand realities.

Come to Middle-earth, a world beyond the furthest reaches of your imagination.

So, there you are. I have read quite a few books by and on Tolkien and I have asked people who know much, much more than me on Tolkien – and none of them has ever heard Tolkien write or say something as smarmy as this. Please don’t use it as a Tolkien quote anymore, thank you. 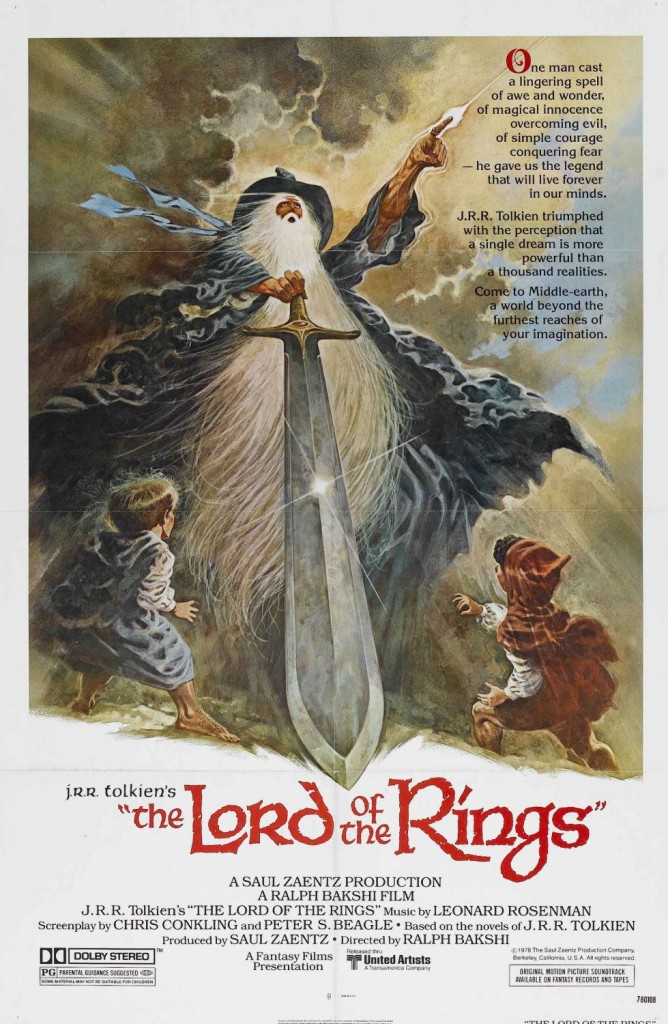 Thanks go out to Pieter Collier, Becky Dillon, Alan Reynolds and many more for making me write this.

UPDATE Thanks to Alan’s comment I can clearly state the source of this quote – it is taken from Fanshawe, Nathaniel Hawthorne’s first published novel (although anonymously at first in 1828). Thanks also to Darkstone at the TORn forums for finding the quote.

Fanshawe had hitherto deemed himself unconnected with the world, Unconcerned in its feelings, and uninfluenced by it in any of his pursuits. In this respect he probably deceived himself. If his inmost heart could have been laid open, there would have been discovered that dream of undying fame, which, dream as it is, is more powerful than a thousand realities. But, at any rate, he had seemed, to others and to himself, a solitary being, upon whom the hopes and fears of ordinary men were ineffectual.

UPDATE II I recently asked Ralph Bakshi for a comment on the origin of the quote and I actually received an answer!

Hello Marcel.
Mr. Bakshi says the poster was assembled by the advertising department at United Artists. He thinks a copywriter there came up with that quote. Thank you for your interest in this film.
Bakshi Studio

Well, unless a miracle happens and someone who has worked with UA at the time steps forward this will be all I will ever find about it. I tried! (And thanks to Ralph Bakshi for answering!)

More information, particularly on artist Tom Jung, is available for my patrons with my Patreon account.