Calls for Papers: Baptism of Fire: The Birth of Modern British Fantasy in World War I/ Women in the Works of J.R.R. Tolkien 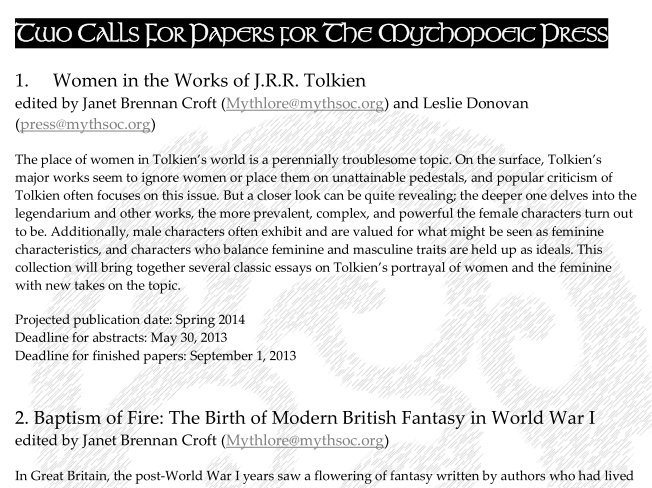 Despite an ever growing number of book titles published in relation to J.R.R. Tolkien’s life and works the number of truly interesting and original pieces of research is limited. Everybody taking an interest in Middle-earthian ventures knows that the number of publishing houses, associations and relevant experts has not substantially grown since the coming of the films; it is proof of the high quality of the interest shown and the research published on the writings of Tolkien up to now.

One of the groups which has shown its devotion to writers of “mythopoeic and fantastic literature” is the Mythopoeic Society with its Mythopoeic Press:

(…) Publication projects primarily involve works related to the Inklings, as well as those who influenced or who were influenced by their work. Works previously published or being considered for future projects include out-of-print materials, collections of short articles and essays, scholarly items, and books that have not found a publisher before.

Recently two calls for papers have been published I would like to pass them on to you, both in this post as well as in PDF form. I would definitely like to add my two cents with the second one.

Women in the Works of J.R.R. Tolkien

The place of women in Tolkien’s world is a perennially troublesome topic. On the surface, Tolkien’s major works seem to ignore women or place them on unattainable pedestals, and popular criticism of Tolkien often focuses on this issue. But a closer look can be quite revealing; the deeper one delves into the legendarium and other works, the more prevalent, complex, and powerful the female characters turn out to be. Additionally, male characters often exhibit and are valued for what might be seen as feminine characteristics, and characters who balance feminine and masculine traits are held up as ideals. This collection will bring together several classic essays on Tolkien’s portrayal of women and the feminine with new takes on the topic.

Baptism of Fire: The Birth of Modern British Fantasy in World War I

In Great Britain, the post-World War I years saw a flowering of fantasy written by authors who had lived through its horrors. Tom Shippey observed in Tolkien: Author of the Century that the originators of what we would consider the “late twentieth-century fantastic mode” were in many cases “traumatized authors” who had survived combat and other experiences of the war. Janet Croft, in War and the Works of J.R.R. Tolkien, notes psychiatrist W.H.R. Rivers’s observations that his Great War patients processed their experiences through both dreams and writing. This essay collection will examine the fantasy fiction, poetry, and potentially art of authors affected in one way or another by the Great War and its lasting legacy.

Tags: Baptism of Fire: The Birth of Modern British Fantasy in World War ICall for PapersMythopoeic PressWomen in the Works of J.R.R. Tolkien