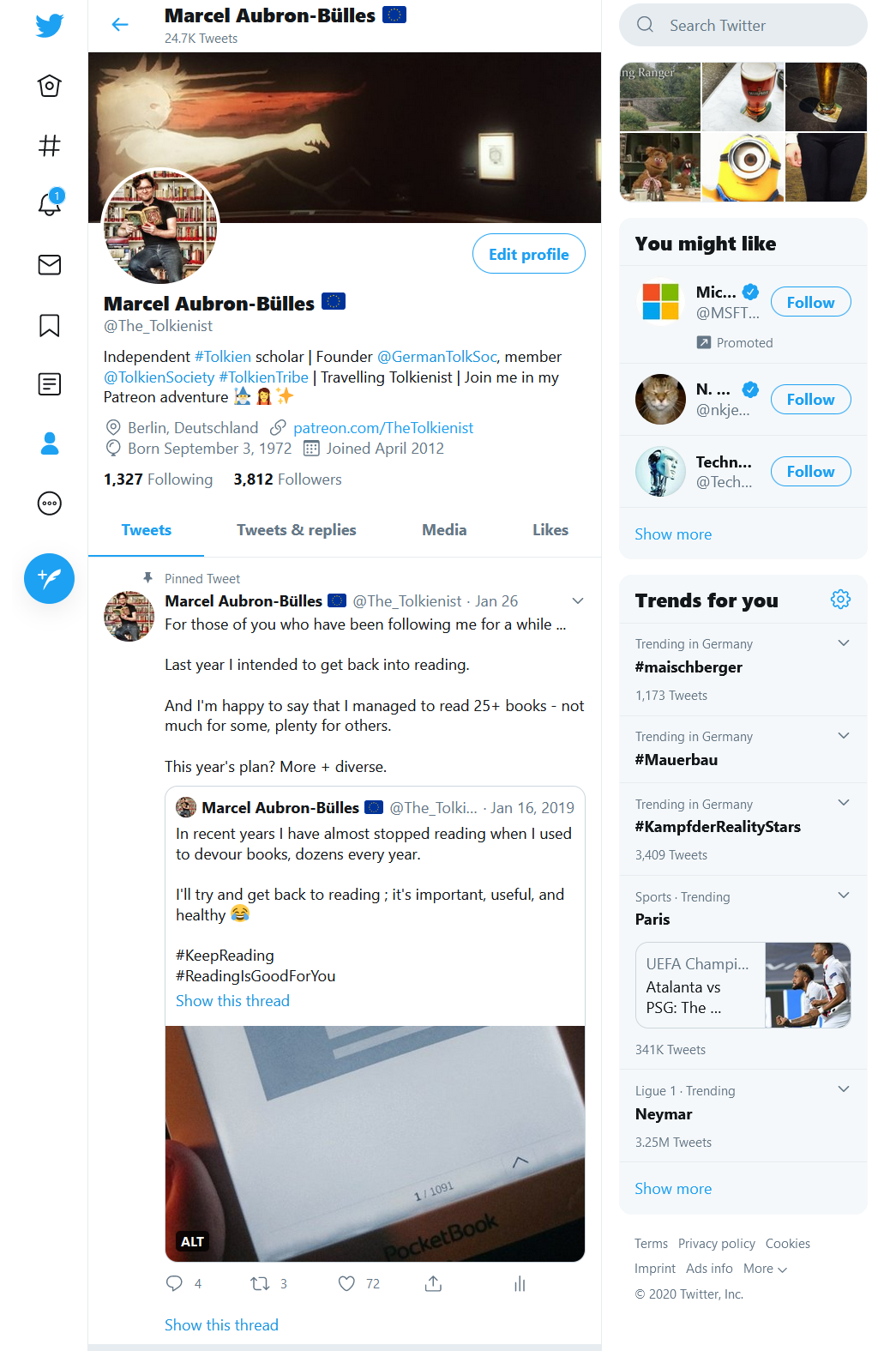 Almost six years ago I shared a post with this blog titled Help me find great Tolkienists on Twitter. Today it feels a bit like the “early days social media”; I had joined on April 26, 2012, that is for @The_Tolkienist account. Before that, in July 2009, I had entered the social media fray with my then account Macrobee (please don’t ask, it is a long story to get that nickname) but realised that the original curation concept for Macrobee did not work out as well as I wished and decided to concentrate on @The_Tolkienist. So in 2012 I opened that account and quite obviously I am still using it today. In fact, it has become my favourite social media channel and that was the reason, back then, that I wanted to create a Twitter list to get fellow Tolkienists together.

And this is how The Tolkienists was born. In that blog post of 2014 I happily notified interested readers:

At the time of writing the Tolkienists’ twitter list has 56 members. I hope we’ll soon have more.

And then ages of the world passed.

I had continued to add interesting Twitter accounts to the list. The reasoning for me to add someone was with a heavy emphasis on smaller accounts, often run by volunteer-organised Tolkien societies, smials, and special interest groups. Yes, TheOneRing.net is on this list, too, but they certainly do not need the “help” of being on such a list – if I added someone it was to promote their efforts where others would not do this. Community does these things, even if it is only a small thing in a much bigger world.

Anyway, in recent weeks I received several suggestions on who to add to the list and when James Tauber with his most excellent Digital Tolkien Project wrote this:

I knew I had to do something about it.

On August 8th, 2020, I checked on my list and it had 183 members. I was very happy to see that its membership had tripled since my blog post in 2014 and was looking forward to adding many new ones. I had given a basic idea of who I would add to the list in this answering tweet to James:

I am so sorry – I’ll spend this weekend going through the list (again!) 😁

Minimum requirements:
– activity in the last three months
– if out of your last 20 tweets only 1 is on #Tolkien, I’ll raise an eyebrow
– if you’ve posted a gazillion on #Tolkien before them, I’m fine 😅

And then, eleven hours later, the list had shrunk to 114, according to these preferences listed. Now, I am not 100% tough on these ‘rules and regulations’ and when in doubt I kept the account on the list instead of removing them but with many things they were very clear, indeed:

There were some discernible changes pertaining to the Hobbit film trilogy by Peter Jackson. Either accounts were started shortly before, during, or directly after it – or went inactive on about the same times. The rather short but obvious media frenzy surrounding the December releases of the films are mirrored, at least in a chronological manner, with some of these accounts going inactive. With some life got in the way – work, moving house, changing subjects and/or interests, disinterest in Twitter. In one case a Tolkien Society left Twitter, lost possession of its blog (or simply discontinued it) and fully moved to Facebook where it is incredibly active to this day.

I was devastated. From many years in volunteer-run fandom I knew very well that these things happen – some people are incredibly active, become the pillar of a local community, help out and inspire and then one day they basically disappear because life. So there is nothing new to this but I still felt dispirited at the lost opportunites and chances these individuals represent.

However, I had promised to update the list and I know there are many wonderful, new members to the community and I will update this post in the next couple of days to show you are out there!

So, when I will have published this post I will have started from 114 members to the list.

What is Follow Friday? Well, if you want know how not to do it please have a look at this amazing Oatmeal comic strip. Aaron Lee has a pretty good description of how to do it properly: it is about recommending great friends doing something outstandingly interesting and let your followers know about them. And that’s what I would like to do with the Tolkienist every friday because let’s be honest: With so many things happening all over the world it is sometimes difficult to stay up to date!

In recent months I have been trying to show as many great people as possible but I think it’d be better to actively support upcoming events, publications, ventures with a Tolkienian link to it – and a Twitter list is a great thing to do just that.

Your help is greatly appreciated!

Easy and simple – use the comment section below to send suggestions you think are great for this list – there is no language barrier, by the way! If you can tell me in English, French or German (or my rather rudimentary) Spanish in a line or two why someone should be included I’ll do so! However, please keep in mind this list is supposed to help those who can use the help – societies, smials, individual bloggers, writers. Weta Workshop are amazing but they don’t really need our help in spreading the word 🙂

Please do keep in mind I reserve the right not to include someone into the list without explanation. Right now I can’t think of anyone off the top of my hat but there is always a lot of work involved with such social media ventures and I can’t take the extra time to explain why someone doesn’t get to be on the list.