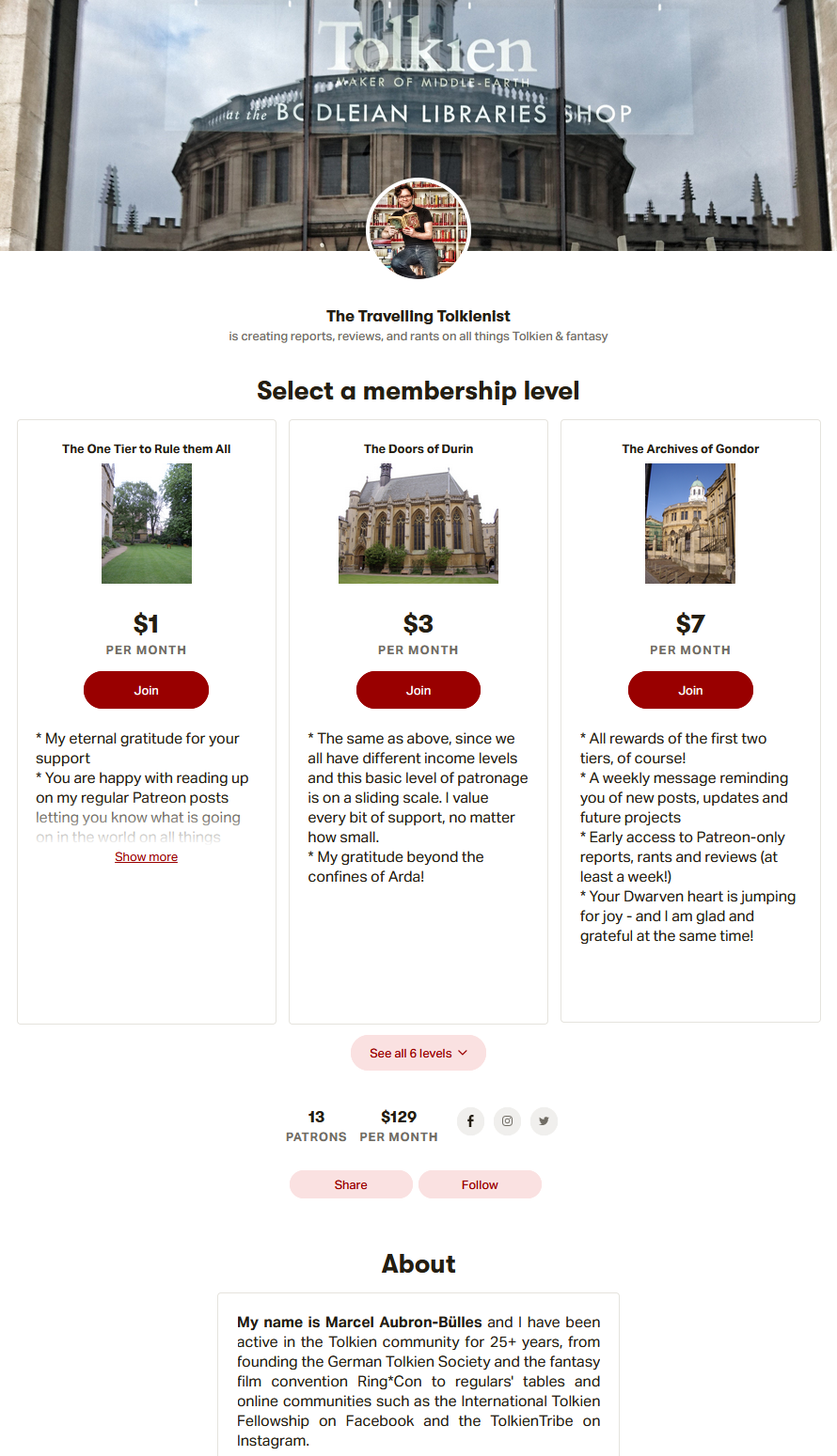 The Tolkienist on Patreon

Update: April 10, 2022 As part of my Unpacking a mystery box series I have found the actual ticket of the event mentioned in the text below and added it as the top photo.

Update: July 09, 2022 Thanks to a little Twitter exchange I have found a link to the first mention of one of Pratchett’s most well-known quotes (Tolkien = Mount Fuji) in a 1999 interview, available via the L-Space.

Our times are blessed with a large number of excellent authors writing fantasy and science fiction stories but it comes as no surprise that to me J.R.R. Tolkien is one of the greatest out there – and that Terry Pratchett comes a very close second or third, vying with Ursula K. LeGuin.

Not many do know about me that after having discovered Tolkien in my teens the next fantasy author I fell in love with (following directly on the fact that the British Library in Cologne no longer had any new Tolkien books for me to read) was Terry Pratchett.

I walked into the English Bookshop, half-way between two major squares in my hometown of Cologne, the Rudolfplatz and the Neumarkt, and breathlessly asked: “I’ve read Tolkien. He’s awesome. Would you have anyone else to read just like him?”

Trying to remember the look on the face of the gentleman owner of this bookshop about thirty years ago I’d love to think there was a mischievous twinkle in his eyes when he answered:

“Well, there is this new author, he’s doing some great fantasy. I’m sure you’ll like him”, and he gave me a copy of The Colour of Magic, in its full Josh Kirby glory:

A treasure chest with feet, trolls, some clown, in a dungeon. It felt a bit as if the artist had been playing HeroQuest drunkenly for a couple of weeks and running away with the colours, indeed.

And the story. Utter nonsense. Perfectly hilarious. Not even near, close or similar to Tolkien. However, outrageously funny. And I fell for Pratchett, hook, line, and sinker, just as with Tolkien.

Little did I know that I would later on meet my (now former) wife at a fantasy event where I represented the German Tolkien Society and she was there for the German Pratchett fan club. The differences between those two – and yet with so many similarities – were mirrored in our relationship and it certainly made for many outrageously interesting years.

Anyway, later on I realised that I was not the only person appreciative of Tolkien’s writings but Pratchett himself, too. If you have had the opportunity of seeing the Tolkien: Maker of Middle-earth Exhibition at the Bodleian Libraries in Oxford or bought yourself a copy of its catalogue you might have stumbled over a letter by a certain Terence Pratchett:

(…) You said something in “Smith” which I hope I grasped, and there was a feeling almost of recognition. An odd feeling of grief overcame me when I read it. I cannot explain my feelings any clearer. It was like hearing a piece of music from way back, except that it was nearer poetry by Graves’ definition. Thank you very much for writing it. [MoMe 102]

It is most interesting that Pratchett lauded Tolkien for Smith of Wootton Major, not The Lord of the Rings, which he had read, too, of course. He had written the letter on Nov 22, 1967. It became part of the Oxford Tolkien exhibition.

Tolkien answered him on Nov 24, 1967. Not only do not many people know of that little exchange but that it was part of the Terry Pratchett “His World Exhibition” which took place from Sept 16, 2017 until Jan 13, 2018. So those two wonderful authors and their connection was mirrored in their exhibitions.

In his collected non-fiction, A Slip of the Keyboard, Pratchett would later go on to say:

“[W]hen I was young I wrote a letter to J.R.R. Tolkien, just as he was  becoming extravagantly famous. I think the book that impressed me was  Smith of Wootton Major. Mine must have been among hundreds or thousands  of letters he received every week. I got a reply. It might have been  dictated. For all I know, it might have been typed to a format. But it  was signed. He must have had a sackful of letters from every commune and university in the world, written by people whose children are now grown-up and trying to make a normal life while being named Galadriel or  Moonchild. It wasn’t as if I’d said a lot. There were no numbered  questions. I just said that I’d enjoyed the book very much. And he said  thank you. For a moment, it achieved the most basic and treasured of  human communications: you are real, and therefore so am I.”

Fans of Pratchett who had the opportunity of meeting will tell you the same thing, over and over again:

He was the funniest, friendliest, most charming and entertaining author you could possibly imagine – and he was always willing to be there for his fans, even with the smallest of events!

Legend has it that in some medieval castle, when there were only about a dozen participants in that particular event, they needed a halberd-wielding obstacle at some staircase – and Pterry happily agreed to stand in as they didn’t have enough people to do it!

I myself heard him say that it was possibly thanks to Tolkien’s small act of kindness in answering that letter that he came to appreciate how much such an answer could mean to a fan and that he himself made sure he would do the same.

In February 2007 Pratchett and many of his friends, one of them Bernard Pearson of the Discworld Emporium, came to the first ever Scheibenweltfest or German DiscworldCon which I attended. My nickname on Great A’Tuin’s back is Moist von Lipwig, by the way 🙂

I came to meet him a number of times but luckily enough I know the exact date I met him for the first time: Oct 17, 1997, at the Mayer’sche Bookshop at the Hohe Straße in Köln. One of the best readings – possibly the best – I ever attended with an incredibly high entertainment value.

I always envied the Pratchett fandom the possibility that they could talk to their author, share in his writing. It was a huge loss to many lovely people I know when he passed away – and to myself, too. I heard the news at the Frankfurt Book Fair, when – of all things – the Seraph Fantasy Award was being handed out to its winners. Hundreds of fantasy fans, a slow murmur rising as people realised what had happened.

Again, some time later I read this in A Slip of the Keyboard – his words on the influence Tolkien had on modern fantasy literature:

J.R.R. Tolkien has become a sort of mountain, appearing in all  subsequent fantasy in the way that Mt. Fuji appears so often in Japanese  prints. Sometimes it’s big and up close. Sometimes it’s a shape on the  horizon. Sometimes it’s not there at all, which means that the artist  either has made a deliberate decision against the mountain, which is  interesting in itself, or is in fact standing on Mt. Fuji.

It will be difficult to find a more fitting description.

Thanks for reading along – this is the first of quite a few posts I have planned on Tolkien & Pratchett: A Series by The Tolkienist.

P.S.: Just to give you an idea of the importance of Pratchett: