Google’s ‘Autocomplete’ function is meant to be a useful tool when searching for anything on the internet. The idea is to suggest search combinations most relevant to what you are looking for, in a sense predicting what you might type in. According to Google it is helpful as it saves time searching, offers spelling corrections, and favourite searches can be easily repeated (if you are logged in with this service.) However, some of the results offered are really surprising and odd – as with many fantasy authors and their characters. Have a look for yourself!

As a very avid internet user I have been using search engines for many years now (and am pretty sorry to see many interesting options go through the window thanks to the overwhelming monopoly companies like Google have become.) And one of the options which really seem useful, indeed, is the autocompletion which helps with a lot of things. Recently I was typing in a search on my favourite author – yes, you might guess which one – and started laughing hysterically. And then I continued on to many others I know …

“Tolkien is a genius”

Me likey. However, this is not the only way to have a look at JRRT. 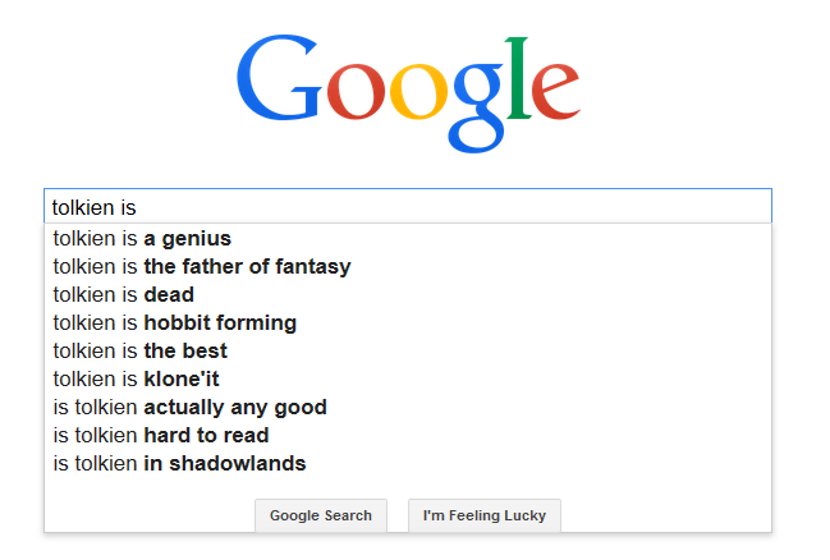 With this the truly essential questions are coming in: “Is Tolkien hard to read? Is Tolkien actually any good?” 🙂

If you enter the search term with Google Germany the critics’ eponymous line is in: “Tolkien is overrated.” Considering the fact that the European nations have their own amazing writers, often not translated into English, this does not come as much of a surprise. And with some influential UK critics chiming in – well, it’s fun to see, anyway!

Even better, though, is any search on major characters, now very much mixed up with the film trilogy’s actors.

“Gandalf is Dumbledore/ Magneto/ a Timelord” 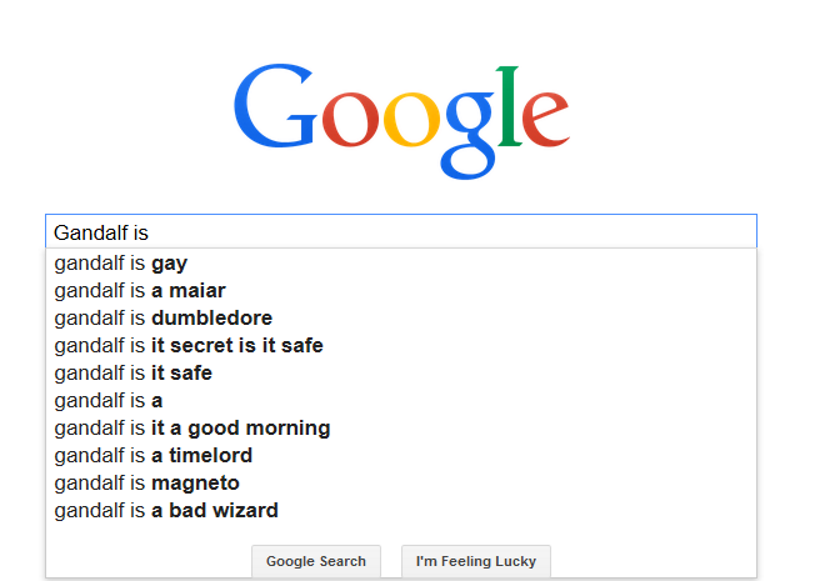 There really isn’t much to say except: Sir Ian McKellen is awesome. Quite obviously 🙂

“Terry Pratchett: Is that my cow?”

With Sir Terry Pratchett, master of Discworld, and probably the funniest fantasy author out there, two things are obvious: his illness and that ‘Dishonored’ seems to be a very popular game including a character called Pratchett. Read up on Pterry and what has made him the author we all love and cherish, written up by Neil Gaiman. And yes, he is a genius, too! 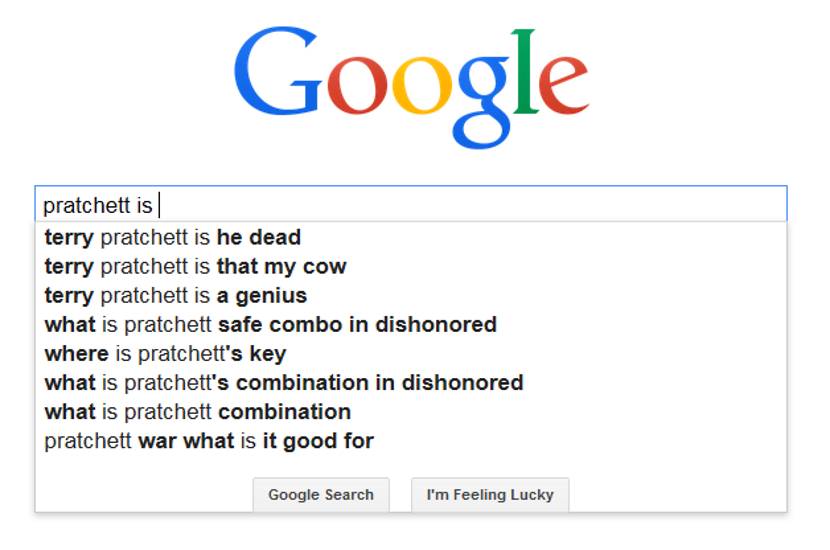 With the longer list of autocomplete options ‘Dishonored’ is obvious again, but at least a Pratchett quote from Thud! crept in (thankfully!)

“JK Rowling is richer than the Queen”

Obviously money seems to be quite an issue with J K Rowling who has become richer than Her Majesty, the Queen (well, if the BBC says so …) And if you  may believe the Daily Mash she has been a dub step record artist as well 😉 Much more interesting is the long list:

“Rowling is a Hufflepuff” 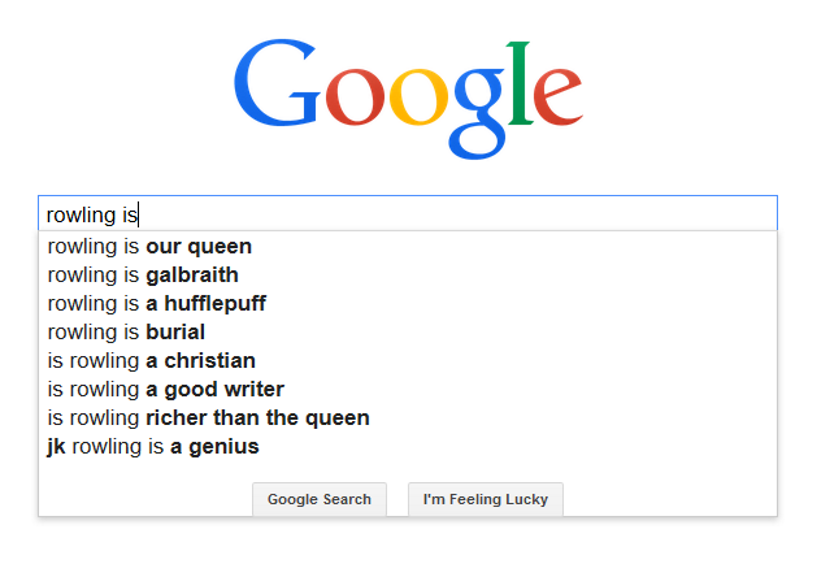 The whole “… is a genius” thing seems not to be of much importance – or we’re having quite a few genies out there! Interesting to see she appreciates Hufflepuff very much, indeed, what with their valours of hard work, patience, justice, and loyalty; her pen name when writing crime novels is Galbraith; and the typical question -when it comes to fantasy- is she a good writer? And yes, she is a genius, too. There!

“George RR Martin: When is the next book”

Now, for every single George R. R. Martin fan out there there can be only one question: “When is the next book” coming out? Some fans seem so fearful of him not finishing the series -called A Song of Ice and Fire, not “Game of Thrones”, by the way- that they go to Google search, posting: “George R. R. Martin is dead.” Nope, he isn’t, and yes, we’ll see the end the series with him alive. Fingers crossed, of course!

Now, to be honest, this kind of search is rather random, of course. There are a number of fantasy authors whose name is difficult to spell (Ursula K. Le Guin, anyone – or should it be GRRM, George R.R. Martin or GRR Martin?) or who have written their masterpieces well before the advent of the internet. David Eddings (author of the Belgariad and the Malloreon) and Anne McCaffrey are a case in point:

Sad to note that both authors are, in fact, dead: Eddings died in 2009 and McCaffrey in 2011. And yes, if you haven’t read the Dragonriders of Pern, you ain’t no scifi-/fantasy fan! But if their wonderful tales aren’t shown on television or the big screen Google searches won’t change easily.

Luckily for all of us, Peter S. Beagle, who brought us The Last Unicorn, is still with us and on an extended tour right now. Go and see the man who wrote the story and watch the awesome film!

Neil Gaiman seems to be one of those authors people simply love, both on a personal level as well as his writings. Great guy all around making clear that “George R. R. Martin is not your bitch.” (I would have expected THAT to turn up in searches!)

“Harry Potter is [all about] fanfiction” 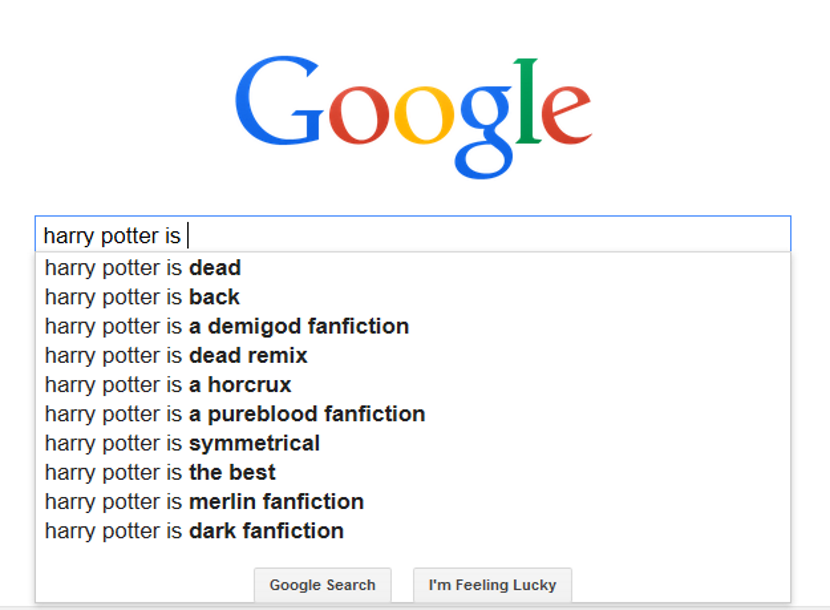 I haven’t been much into fanfiction (I am not overly fond of it as many of its implications are not very palatable to me, to put it mildly) but I did have a look around, once or twice. I know it is a huge thing but that Rowling’s stories obviously shaped modern fan fiction writing had escaped my notice *g*

I tried to keep my searches to Google.com, with English as language, instant autocomplete suggestions activated. But you can play around – there seem to be regional differences and you can actually change how results are shown (obviously!) – by region, relevance, instantaneously or not … and then you get this 🙂

“Tyrion Lannister is hot/ a boss/ the best/ a badass” 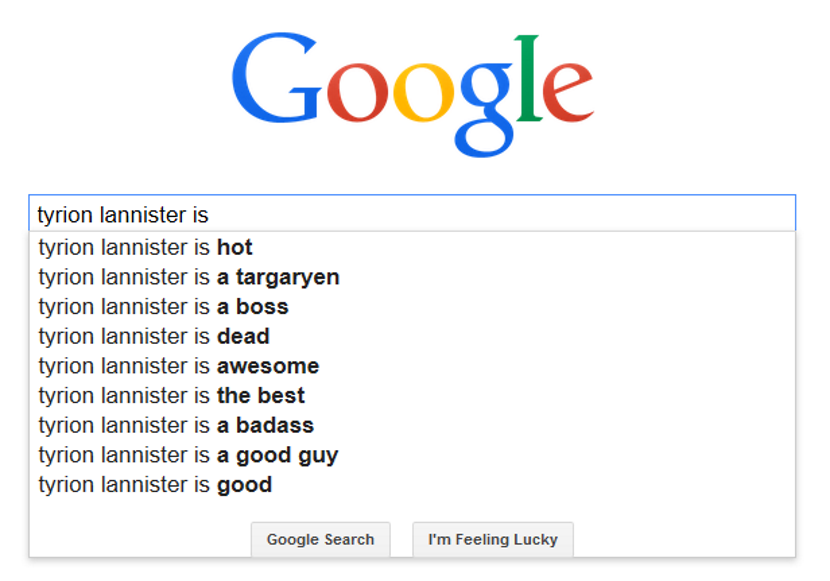 Now, quite obviously both the character from the books as well as the actor Peter Dinklage have hit it off with the fans. Now, with the last volume the Imp’s travels weren’t that much fun to read but he truly is a “good guy.” Let’s see where he is going.

P.S.: If you have some time to spare this is a fun sport. Share your findings in the comment below 🙂

P.P.S.: If you find anything offensive you can report it, of course. There have been very unfortunate search results and Google has changed its approach to Autocomplete accordingly: Everything that can be measured can be manipulated.