Mountains on Titan/ NASA/JPL-Caltech/University of Arizona/USGS

The International Astronomical Union (IAU) and its Working Group for Planetary System Nomenclature (WGPSN) are responsible for selecting official names for features on solar system bodies. Luckily for Tolkien fans in 2012 his success and, of course, the success of the film trilogies ensured his names would go to the stars – particularly Titan.

The most excellent Kristine Larsen of Central Connecticut State University who only recently won ‘Best Article’ with the Tolkien Society 2020 awards mentioned on Facebook that the IAU uses Robert Foster’s The Complete Guide to Middle-earth in its 1978 Ballantine Books edition as reference, also noting that this is where the “Moria Mountains” on Titan must have come from.

However, there are quite a few other things of interest here, too.

Foster’s Guide is listed as [278] with the reference list on the WGPSN’s search page; but there is more – Beowulf comes in at [42] in the 1963 New American Library translation by Burton Raffel; Fairies by Brian Froud and Alan Lee of 1978 at [92]; Gulliver’s Travels by Jonathan Swift as [191] in its Holt, Rinehart and Winston edition of 1967; [229] will give you Dune by Frank Herbert in its 1965 Chilton Books form (the other titles of the series are also there, too.) Generally speaking the reference list of close to 600 titles is an extensive list of all things mythical, linguistic and scientific from all the world’s cultures so if you ever need a reading list this one’s just perfect! By the way, one of the most recent additions to the reference list at [568] is The Fellowship of the Ring in its original 1954 incarnation!

Gabrielle Barone of the Smithsonian wrote in a blog post in 2018 that the first names on Titan inspired by Tolkien were given in 2012 and this has continued until today. Planitiae and labyrinthi on Titan are inspired by names of planets from the Dune series by Frank Herbert – what else there is you can find in this list. 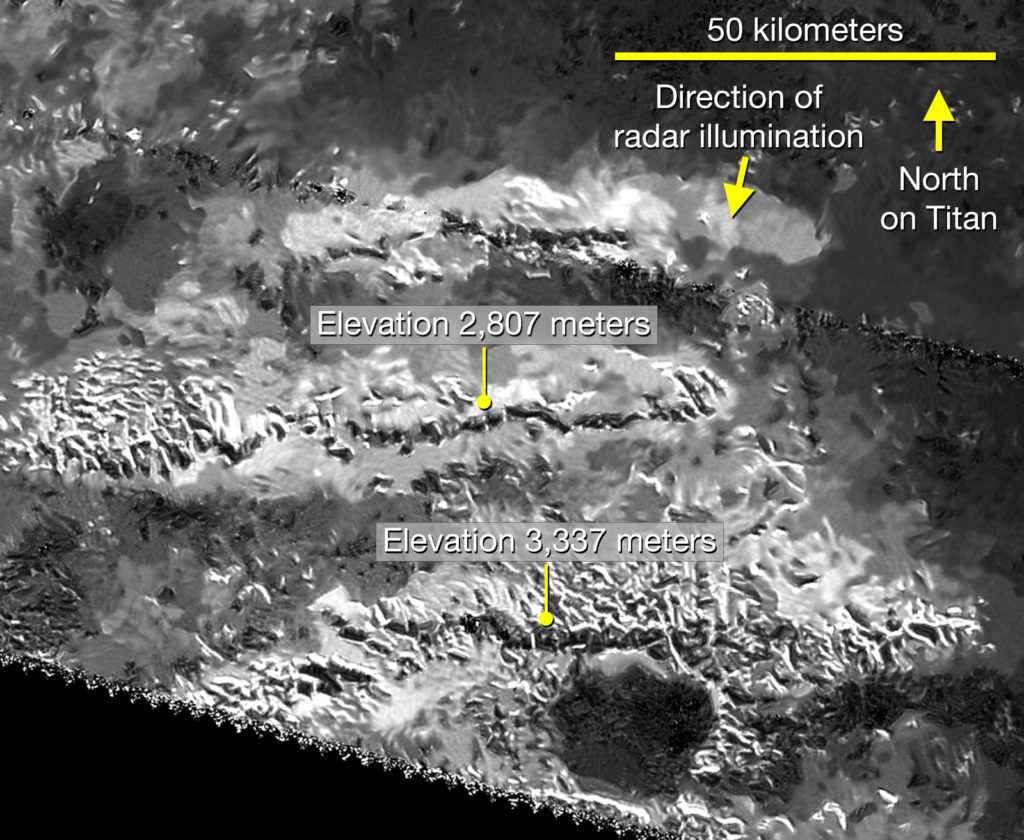 Can you guess the highest of the mountains on Titan?

No, it’s not one of the three Mountains of Moria.

The trio of ridges on Titan known as Mithrim Montes is home to the hazy Saturnian moon’s tallest peak. The mountain, which has an elevation of 10,948 feet (3,337 meters), is located midway along the lower of the three ridges shown in this radar image from NASA’s Cassini spacecraft.

This map will give you all the names inspired by Tolkien – if you don’t know them yet you could turn it into a great pub quiz question set! 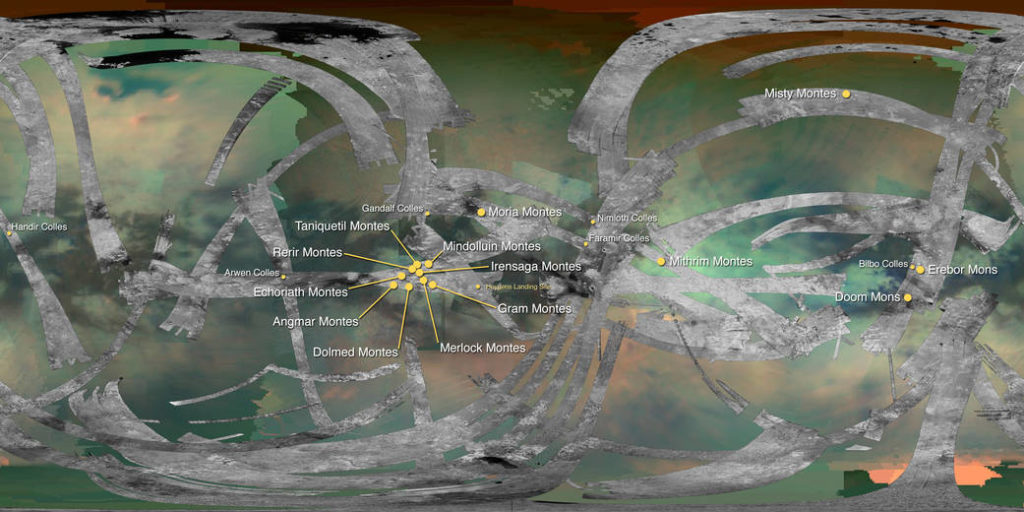 Mountains on Titan/ NASA/JPL-Caltech/University of Arizona/USGS