Finally: Tolkien’s translation of “Beowulf” to be published on May 22

Today’s news of an upcoming publication came as a surprise to the Tolkien community at large and has been met with great joy: J.R.R. Tolkien’s own translation of Beowulf, the epic he worked on as a leading academic in his field and a major source of inspiration to his stories, will be published on May 22nd by HarperCollins. Edited by Christopher Tolkien it will also include a longer commentary by J.R.R. Tolkien on his translation based on the lectures he gave in Oxford in the 1930s on the story of the Geatish hero and prince, Beowulf. The only surviving manuscript in which the epic is recorded is available online with the British Library.

From [J.R.R. Tolkien’s] creative attention to detail in these lectures there arises a sense of the immediacy and clarity of his vision. It is as if he entered into the imagined past: standing beside Beowulf and his men shaking out their mail-shirts as they beached their ship on the coast of Denmark, listening to the rising anger of Beowulf at the taunting of Unferth, or looking up in amazement at Grendel’s terrible hand set under the roof of Heorot. [Commentary by Christopher Tolkien.]

However, there is even more to this edition than ‘just’ Beowulf. It will include another unpublished short story by Tolkien:

Sellic spell, a “marvellous tale”, is a story written by Tolkien suggesting what might have been the form and style of an Old English folk-tale of Beowulf, in which there was no association with the “historical legends” of the Northern kingdoms.’ 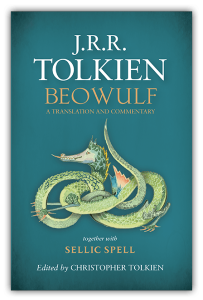 It will be interesting to see how Tolkien’s work will fare in comparison to the translation by Nobel laureate in literature, Seamus Heaney. His 1999 Beowulf: A new translation is considered the seminal publication today, based on its poetic merits. However, Heaney was not a medievalist such as Tolkien who will have possibly approached the text from a different angle. The Oxford academic is well-known for his mastery of alliterative verse – the form of verse Beowulf was written in – both in deciphering and understanding it as well as writing creatively in it (see, for example, The Fall of Arthur.)

“(…) It will be interesting to see if it gives Heaney’s Beowulf a run for its money (…)” Simon Armitage.

The Guardian broke the news in a longer piece talking to Tolkien expert John Garth and poet Simon Armitage and mentioned that even the opening Hwæt has “long foxed scholars” – let’s see how much it will entertain its readers in years to come.

This book seems to be part of a movement begun by Christopher Tolkien and his publishers in recent years to bring back J.R.R. Tolkien to the forefront again after fifteen years of almost exclusive public interest in the film trilogies by Peter Jackson. As I wrote in a longer essay for German online fantasy magazine and blog, Phantastik-Couch.de, with Children of Húrin (2007), The Fall of Arthur (2013) and now Beowulf: A Translation and Commentary (2014) this seems to be the time to get back to the books and an author and academic who wrote stories standing the test of time: this one was finished 88 years ago. The third ‘Hobbit’ film was originally slated for a July 18, 2014, premiere – it does not really look like coincidence to me that May 22nd was chosen as a publication date.

Please also see my recent article on artist Benjamin Bagby bringing Beowulf to life with a performance in Anglo-Saxon.