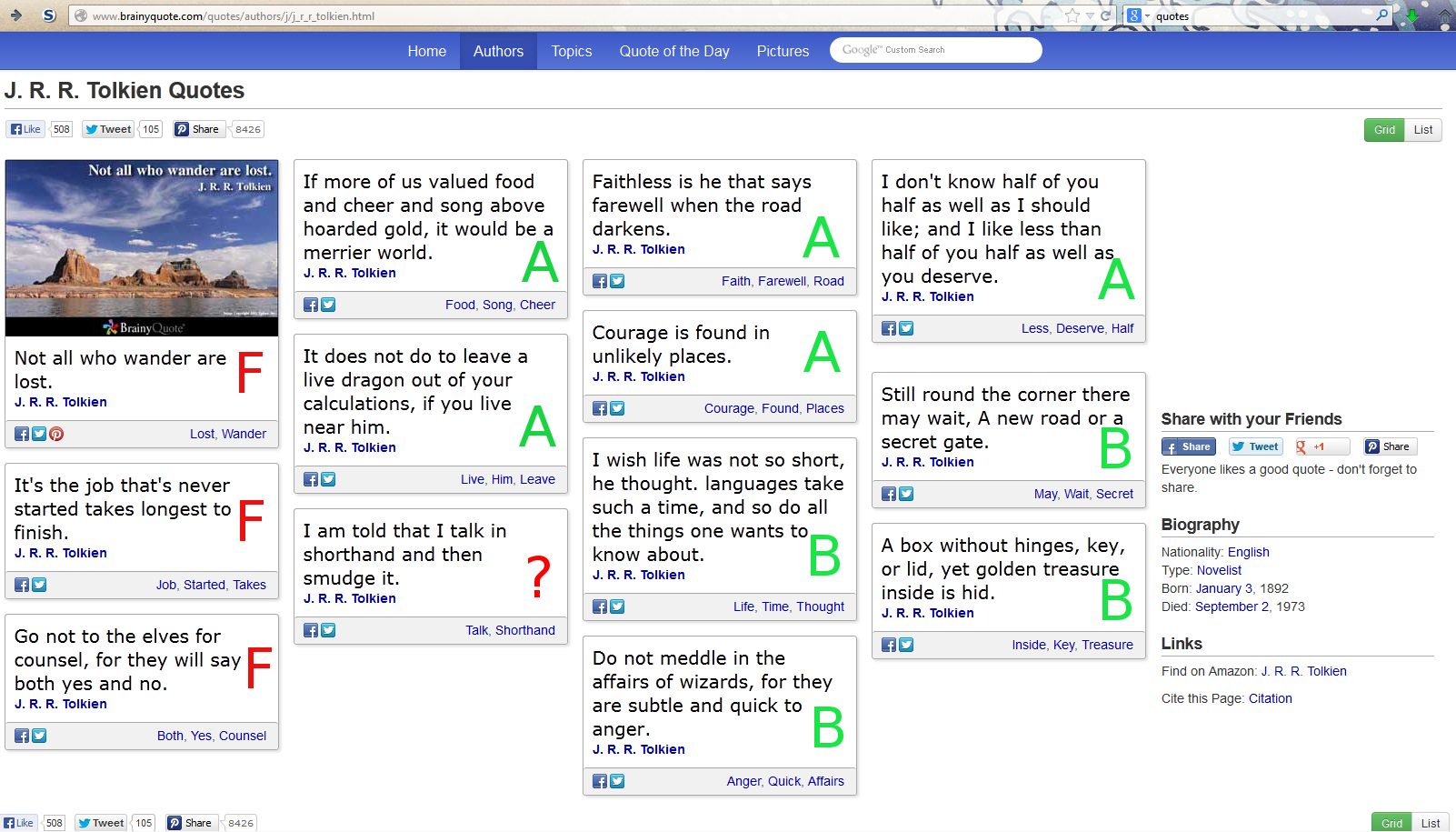 In recent weeks I have been scouring the web to have a look at some quotes wrongly attributed to Tolkien. Now, the unfortunate part with any of these undertakings is the fact that there are dozens of “quote pages” listing all sorts of baloney and you would have to contact all of them to get rid of the wrong quotes which I consider impossible. However, I am not so easily deterred and just wanted to show you how a fairly well-known quote page uses and abuses Tolkien. First of all, almost no page has the actual titles the quotes are taken from. Second, it is almost never explained who is actually saying the quote in question. And third, there are almost always mistakes in their lists. My case in point. BrainyQuotes.com. 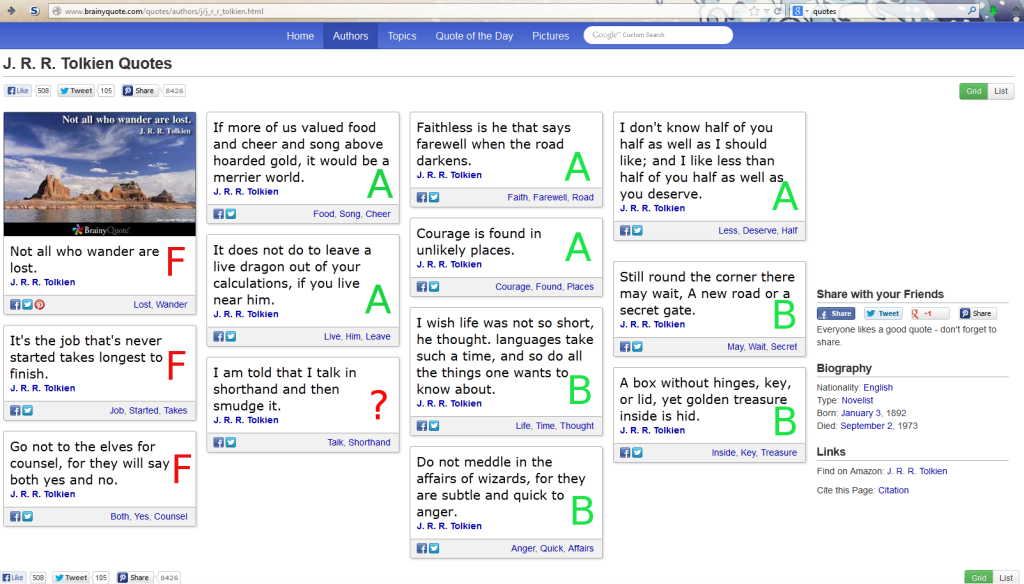 Not all [those] who wander are lost. I wrote about that one at length.

It’s the job that’s never started [as] takes longest to finish (…) Sam Gamgee. The Fellowship of the Ring. Book Two. VII. The Mirror of Galadriel.

Go not to the Elves for counsel, for they will say both [no and yes.] Frodo. The Fellowship of the Ring. Book One. III. Three is Company.

If more of us valued food and cheer and song above hoarded gold, it would be a merrier world. Thorin Oakenshield. The Hobbit. XVIII. The Return Journey.

It does not do to leave a live dragon out of your calculations, if you live near him. The Hobbit. XII. Inside Information.

I am told that I talk in shorthand and then smudge it. ?

Faithless is he that says farewell when the road darkens. Gimli. The Fellowship of the Rings. Book Two. III. The Ring goes South.

Courage is found in unlikely places. Gildor. The Fellowship of the Ring. Book One. III. Three is Company.

[“]I wish life was not so short,[“] he thought. [“]languages take such a time, and so do all the things one wants to know about.[“] Alboin Errol. The Lost Road (History of Middle-earth V). Part One: The Fall of Númenor and the Lost Road. III. The Lost Road. (i) The opening chapters.

Do not meddle in the affairs of [W]wizards, for they are subtle and quick to anger. Gildor. The Fellowship of the Ring. Book One. III. Three is Company.

Still round the corner there may wait[,] A new road or a secret gate. Frodo. The Fellowship of the Ring. Book One. III. Three is Company.

A box without hinges, key, or lid, yet golden treasure inside is hid. Bilbo. The Hobbit. V. Riddles in the Dark.

This particular list is a very odd choice of quotes. True enough, most of them are right, but three (or rather four) are wrong and it is quite strange to see that they were mostly taken from The Hobbit and The Fellowship of the Ring – as if the rest of LotR did not offer any memorable quotes. However, if you search for more Tolkien quotes on BrainyQuote you will find more than those; it is just one of the categories put together (randomly.) And then there is this quote from The Lost Road, a volume from The History of Middle-earth, which the general public definitely does not know. Heck, who would have found _that_ quote? – probably a Chaucer fan. I have never heard of the ‘shorthand’ quote and its supposed attribution to a New York Times interview of March 3rd, 1957 does not work – neither Chronology nor Tolkien Gateway has any info on this. Please enlighten me if I am wrong on this. The two last entries are quotes from a song in The Lord of the Rings and one of the riddles from The Hobbit and you can see that they simply copied it off some place where it was probably fully listed – the missing line return is evident with both.

“A” is for a fully correct quote, “B” for a quote where punctuation or spelling is incorrect and F/? for quotes missing words or wrong attributions. You may have a look at any quote page on the web and I dare you to find one that is correct on this. Bring it on 🙂

Update Thanks to the comment of Harm Schelhaas I am now able to shed light on the ‘shorthand’ quote. This is taken from Christina Scull and Wayne Hammond’s Chronology, p. 499.

15. January 1957. Tolkien is interviewed in London by Ruth Harshaw for a broadcast in the United States (on 9 March 1957). In ‘When Carnival of Books Went to Europe’, American Library Association Bulletin 51 (February 1957), she will still write she had difficulty in understanding Tolkien, and said in desperation: ‘I do appreciate your coming up from Oxford so that I might record you, Professor Tolkien, but I can’t understand a word you say.’ Amused, he replied: ‘A friend of mine tells that I talk in shorthand and then smudge it.’

So that quote is partially correct and we now have the right quote to list it. Thanks, Harm!