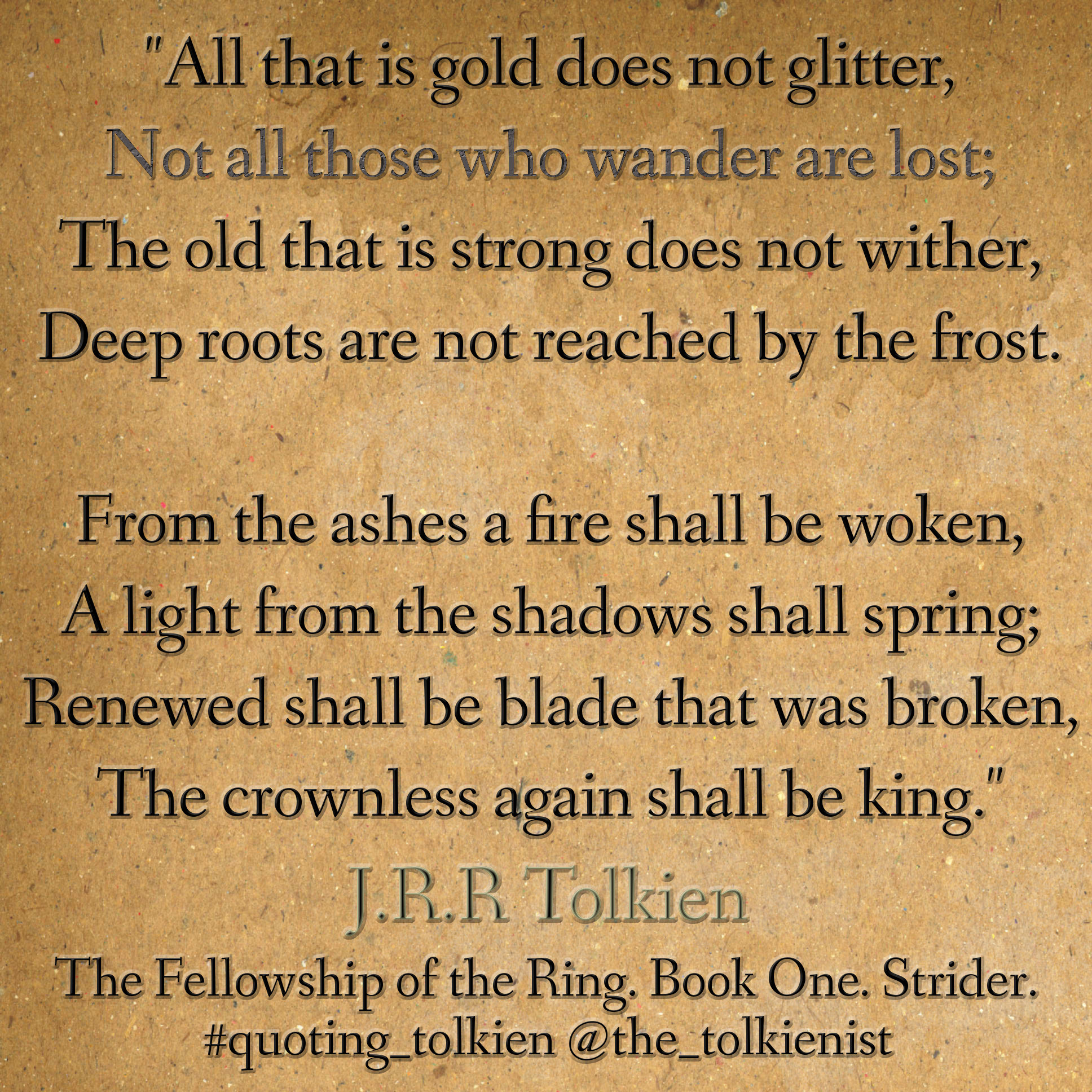 All that is gold does not glitter, poem by J.R.R. Tolkien

In my on-going series Things J.R.R. Tolkien has never said, done, written or had anything to do with (TThnsdwohatdw) I present you with a very quick and dirty post on a quote which has been used by many and it is only wrong by one word. Now, I already know what some people will say -“Man, it’s only one word!” Yeah, right, but take away one word from “I am not an idiot” and you will get the idea why I am doing this.

However, before you continue reading I would like you to use the next link and have a look at it. It is a Google search looking for “Not all who wander are lost” [ATTENTION: This is the WRONG quote.]

With me I get 760K results using this particular line. Hell, Wikipedia even has a disambiguation page on this because people have got it wrong. And what is wrong with it? The word ‘those’ is missing.

Your next task is to click the following link to see how many people make money off it at Etsy.com:

Yes, precious, I am an Etsy link 🙂

And your next and last task is to read out these lines out and see whether they work:

I say to all who consider the songs and poems in The Hobbit and The Lord of the Rings childish play – you are horribly mistaken. In fact, most of them are well-crafted pieces driving anyone nuts who tries his/her hand at rhyme, metre and scansion. If you don’t care for this – fair enough. However, I do. And I’ll show you why leaving out ‘those’ is a rather grave mistake. (To this very day my alma mater, the University of Cologne, has Tolkien’s Errantry as an example for ‘exotic metrical effects – that is, he is driving students of English literature nuts to this very day!)

The rhyme is ABABCDCD, alternate lines rhyming. The poem consists of two stanzas which in itself consist of two couplets. Lines 1-2 are made up of 8 syllables, lines 3-4 of 9 syllables, lines 5 and 7 of 10 and lines 6 and 8 of 8 syllables. The metre is determined by allocating the stressed and unstressed syllables of every line and may look something like this:

“My crest has long since fallen” since I did my last metric analysis and this is probably all wrong (please do let me know what’s right, then!) However, if this is just halfway correct you will see that Tolkien had a particular pattern for this short poem in mind, there is a certain structure to it which would not work with the wrong quote (the other 8-syllable line in the poem works fine with Amphibrach, Iamb, Anapest in differing order – that is: [Unstressed + Stressed + Unstressed] [Unstressed + Stressed] [Unstressed + Unstressed + Stressed] .) And Tolkien was a perfectionist on this (usually.) Other patterns include the repetition of a trochee at the end of lines 1, 3, 5 and 7 and an iambic ending for lines 2 and 6 as well as an anapest ending on lines 4 and 8. I think you are getting the drift. And the pyrrhic foot is often found with classical Greek poetry – something Tolkien knew very well thanks to his school and his first two years at Exeter College. Whether you categorise this poem as a rather odd ballade or a Shakespearean sonnet, cut off before its rhyming couplets (as the first line is an allusion to Shakespeare’s Merchant of Venice), I leave up to you.

P.S.: If you don’t go for the ‘pyrrhic’ foot it might also look like this (and dropping some syllables by the wayside, if you are a courageous poet):

All that is gold does not glitter

Tags: All that is gold does not glitterJ.R.R. Tolkienwrong quote

🏘️ If you ever like sending me a birthday gif

I started out on a little adventure this year with

🧳 "The Road goes ever on and on Down from the d