“The Fall of Arthur”: J.R.R. Tolkien’s take on the Arthurian legends 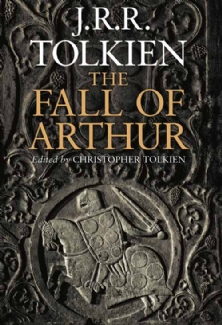 On May 23rd, 2013 a new book by J.R.R. Tolkien (edited by his son Christopher Tolkien) has been published: The Fall of Arthur. According to the official website at HarperCollins, it is: “The world first publication of a previously unknown work by J.R.R. Tolkien, which tells the extraordinary story of the final days of England’s legendary hero, King Arthur.”  I hope it is further proof of Tolkien’s role as a modern myth-maker who is sorely underestimated by many because he has also written ‘fantasy literature.’ His work on Sir Gawain and the Green Knight, Beowulf, The Legend of Sigurd and Gudrún among others and now Arthur should show he is much more than an old-fashioned linguist with a hunch for hobbits but an academic who took the great literary heritage of a time gone by and creatively shaped them into new forms.

At the time of publication the Tolkien Estate has also published parts of the introduction to the book from Christopher Tolkien on their website.

It is well known that a prominent strain in my father’s poetry was his abiding love for the old ‘Northern’ alliterative verse, which extended from the world of Middle-earth (notably in the long but unfinished Lay of the Children of Húrin) to the dramatic dialogue The Homecoming of Beorhtnoth (arising from the Old English poem The Battle of Maldon) and to his ‘Old Norse’ poems The New Lay of the Völsungs and The New Lay of Gudrún (to which he referred in a letter of 1967 as ‘a thing I did many years ago when trying to learn the art of writing alliterative poetry’). In Sir Gawain and the Green Knight he displayed his skill in his rendering of the alliterative verse of the fourteenth century into the same metre in modern English. To these is now added his unfinished and unpublished poem The Fall of Arthur.

You will see that this poem, unfortunately, is unfinished; however, I am quite sure it will still be worth the read (I haven’t read it yet). According to John Garth who has written one of the best books on Tolkien in recent years with Tolkien and the Great War this is quite true, indeed. His review has just been made available with The Daily Beast:

Early in The Fall of Arthur, long awaited by fans of J.R.R. Tolkien and now edited for publication by his son Christopher, an army rides to Mirkwood where they see in a storm above it, Ringwraith-like:

But this isn’t Middle-earth: it is Europe on the brink of the Dark Ages, and the army is led by Arthur and Gawain. Mirkwood is simply the old name for Germany’s eastern forests, which Tolkien borrowed for the children’s story he was writing in the same period in the early 1930s, The Hobbit.

I definitely have to get me a copy of The Fall of Arthur as soon as possible.