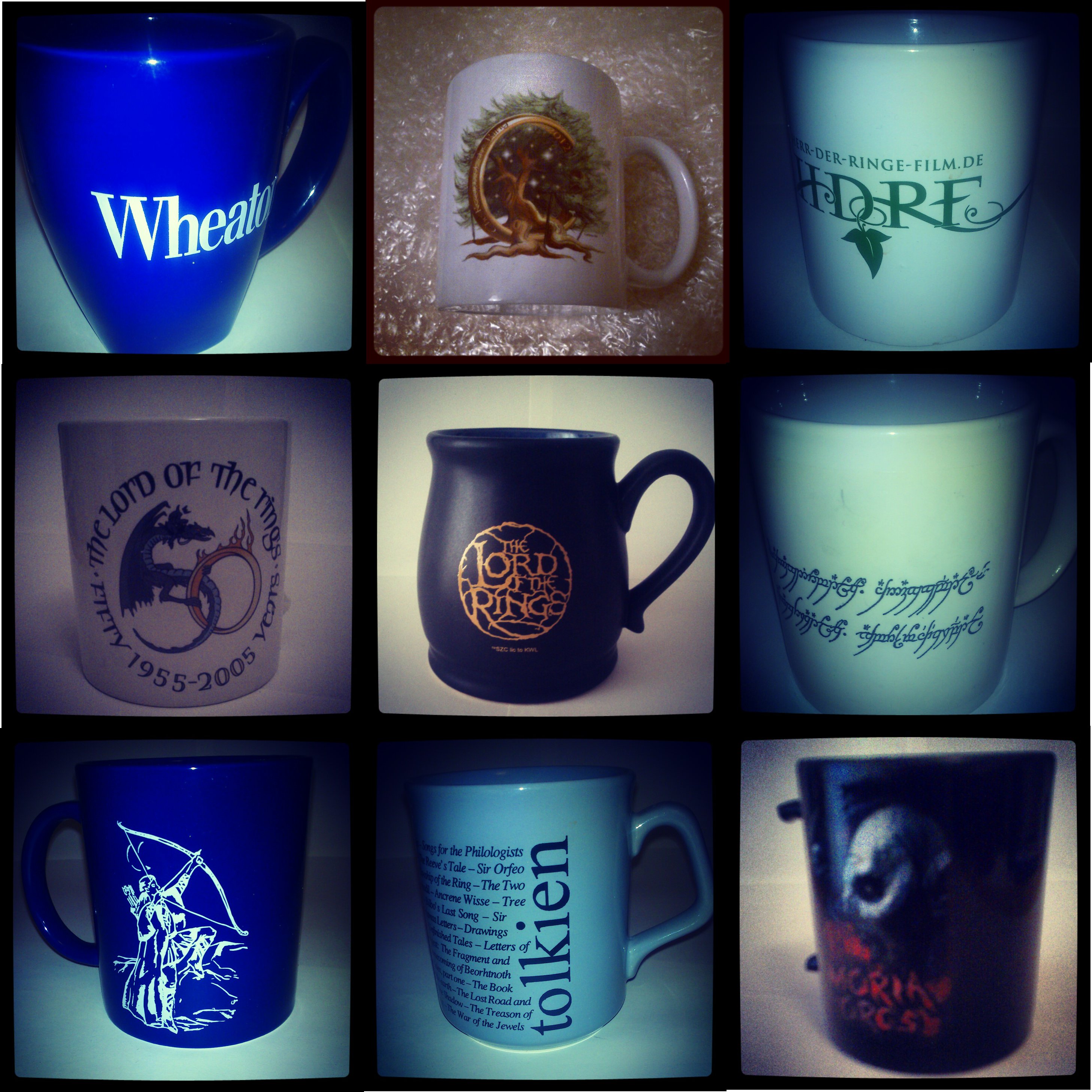 Let's have a --- well, several cups of coffee with this

This one has been on my mind for quite some time but particularly since participating in the Return of the Ring in Loughborough, England, last summer. Whenever you participate in a great event, meet fellow Tolkienists and basically just have the time of your life, you would like to take something with you as a remembrance. At least, this is how it is with me. It could be coffee mugs, t-shirts, key chains, books – anything one could come up with displaying a badge, logo, design fitting to the occasion. And when I thought how to make some of my fondest memories ‘come to life’ I just had to look at my kitchen shelf and the coffee mugs sitting there. So, without further ado, I give you a little story about great Tolkien events in the last fifteen years, in chronological order. P.S.: Please bear with me if I get any names or dates wrong – I am quite sure all of you will be able to correct me in the comments’ section! 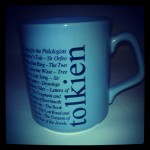 The Works of J.R.R. Tolkien

Surely one of the most important years in my life as a Tolkienist for I participated in Oxonmoot for the first time! I had never been to Oxford before, had never met that many fellow Tolkien fans in my life, had never seen Priscilla Tolkien before. It was a year of many firsts. Just to stay at University College, right off the High, in walking distance to the Botanical Gardens and Magdalen! I find it hard to describe my emotions today, almost twenty years later, but I what I can say is that I have only the fondest of memories of an elderly gentleman named Lester Simons (who used to be the Membership Secretary of the TS for many years – a fact I only found out after a tremendous number of pints) who took good care of the first timers – in an outrageous silvery costume and a massive golden goblet in the form of a dragon engulfing the cup. I had never felt so at home.

I am fairly sure the mug was done at a later time but to commemorate my first ever visit to England and Oxonmoot I have placed it squarely in 1994. 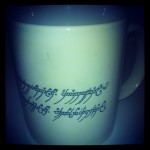 My first visit to Oxonmoot and the incredible amount of information I had received on all things Tolkienian there made me wonder at the fact that Europe’s most populous country did not have a Tolkien society, not even a special interest group. I had become the European Representative of the Tolkien Society at some point in time (good old hand-written times, that is) and thought it might be a good start to do a SIG with Germany’s largest roleplaying club, the Guild of Roleplayers (GfR e.V.) which remains the largest such association in Germany today. We founded a smial called “Brandy Hall”, had our regular meetings and first “Tolkien Days” in an old Prussian fort in Cologne (with round doors and windows, mind!) and it became the starting point for the German Tolkien Society (see below) – our first ever presentation as a smial was at FeenCon. We did a mug for our members and I think we never had more than 20 of those done, lavishly illustrated with the door to Bagend on one side and the Ring inscription on the other. 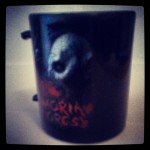 Jumping ahead a few years there were some films done based on Tolkien’s novels. 🙂 Yes, we all know them by heart, Peter Jackson did The Lord of the Rings film trilogy. It is quite a pity that the official web site has been severely truncated; it used to be a wealth of information on the films. Anyway, part of the merchandise deal were, of course, mugs. Unfortunately, those were pretty cheaply done (I have recently seen some Bilbo Baggins mugs at my local supermarket for 2,99€ and they were as awful as the price suggested. However, I still had to get one of the Moria Orcs, one of the interesting additions to the story.) The handle broke off pretty quickly – this is an easy way to tell whether you have a decent mug or not, by the way. There were many more mugs at the time but I can’t seem to remember them all – those years are all in a haze 🙂 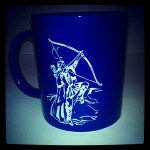 I founded the German Tolkien Society in 1997 with the help of six fellow students and friends in a lovely cellar bar (which had something Tolkien loved – a ‘cellar door’) in Cologne. From our very beginnings of 17 visitors of our first AGM in 1999 to more than a hundred nowadays, b/w copied leaflets to a full-colour magazine and academic yearbook – it has been a great ride. And to coincide with the films and to have better mugs we produced them ourselves. Our then secretary Andrea was a great Legolas fan. And by that I mean a huge fan. Really. So she drew Legolas, we put the society’s logo on the other side of the mug and there we were. Don’t ask how many of them I have at home. 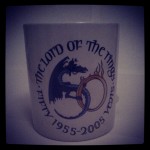 This year saw the second major international Tolkien Conference (after 1992 in Oxford where Christopher Tolkien himself read out material from his father at the Sheldonian Theatre.) This one took place at Birmingham’s Aston University. I had never seen such a large number of fellow Tolkienists from all over the world – I think we were about 900 in the end. Alan Lee had to give his presentation twice because the largest auditorium couldn’t fit all! I met Tom Shippey for the first time, heard Patrick Curry speak, was invited by the Mayor of Birmingham together with fellow committee members from all over the world – and the German-Belgian-Finnish party (or was it a German-Belgian-Greek party – maybe even the Dutch had their hands in this. You know how they are) was a blast. And yes, sadly enough I’ve known ever since then I can sing the ‘Star-spangled banner’ better than my own national anthem. Don’t try to compete with 25 odd Greeks, though. Fun was had by all. I still have to write that particular review… Did I mention I gave the first talk of that particular conference, speaking about John Garth’s “Tolkien & the Great War” without knowing that he was present until he raised a hand and said “Thank you for liking my book, I’m John Garth.” 🙂 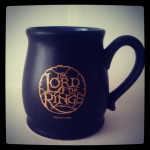 In 2006 I was invited to be a guest speaker at the Gathering of the Fellowship in Toronto. I had to put up with Craig Parker (you know, that Haldir guy) as a sub-par student in Tolkienology, won the ‘Iron Man Award’ for my ‘outstanding contribution’ to the event and was able to see the second version of the infamous/famed Lord of the Rings Musical while Anthony from New York was sitting beside me saying ‘this is so wrong, that is not acceptable, what the hell is this’ for about four hours straight. It was hilarious. My first time meeting fellow American and Canadian Tolkien fans which led to an amazing opportunity for me – see next mug. 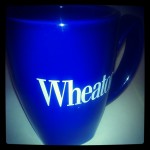 I was kindly invited by Tolkien expert Michael Drout to visit Wheaton College, MA, to do some studies on my then dissertation project (which, unfortunately, did not come to fruition). This is the real college, by the way, not the weird one in Illinois (you know, the one with Tolkien’s desk, Lewis’ material etc.) I had the opportunity of participating in Tolkien Studies and the Tolkien Encyclopedia and live and work in the United States which was an incredible experience. Fell in love with Boston, I have to say. And yes, I not only celebrated St. Paddy’s day there but had the chance of visiting friends in New York and one of the leading experts on the Tolkien fan community in St. Louis, Gary Hunnewell. Three awesome months!

One of my best friends and fellow Tolkien fans from Germany, Stefan Servos, runs the biggest German-speaking website on the films, Herr-der-Ringe-Film.de. So big he was invited to the film set of The Lord of the Rings film trilogy! And in 2008 he and his team celebrated their ten years anniversary in style in one of Germany’s most impressive medieval bulwarks. I was invited as a speaker and glad to join in the festivities. Of course, there had to be a mug on this one. Do visit Stefan’s, that is, Cirdan’s site – it is mostly in German but some great specials are in English. 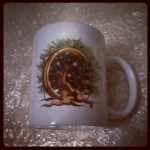 After somewhat of a break in my more ‘hectic’ Tolkien years (founding and running a society, co-founding Ring*Con, travelling the world and spending basically all of my time on Tolkien :)) I am very glad to be back again. And last year’s international Tolkien Conference at Loughborough was the perfect opportunity to return. Although smaller in scale in comparison to Birmingham 2005 it offered many, many chances not only of getting to know great people (I finally had the chance to meet the most wonderful and charming Brian Sibley!) but also an art show of unbeknownst proportions – I think there has never been a bigger collection of Tolkien art presented at such a venue. Again, there still is this review to write … 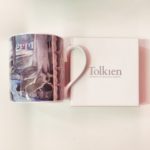 Mug from the Tolkien: Maker of Middle-earth Exhibition, Oxford

A few years have gone by, obviously, but things have come and gone and there were always opportunities to get new mugs. One of those was the Tolkien exhibition at the Bodleian Libraries in Oxford, Tolkien: Maker of Middle-earth, and this is one of the mugs available in the shop. Two different mugs are still available with the online shop and I can only highly suggest you get one of those. However, I have to seriously warn you that you may spend much more money on many more things than just a mug if you visit the shop – you have been warned!

What are your favourite ‘tea & coffee mugs & moments’ 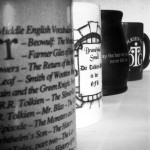 Some of the mugs’ backs…

Share your stories, anecdotes and remembrances in the comments, shoot me an email at marcel(at)thetolkienist.com – let us know what wonderful memories you have at home in this form. Don’t start on T-shirts yet, that may be for another article. Join in the Middle-earth Memories fun!

Note: All copyrights/ trademarks belong to their respective owners.