Review: ‘The Hobbit: Kingdoms of Middle-earth’ by Kabam 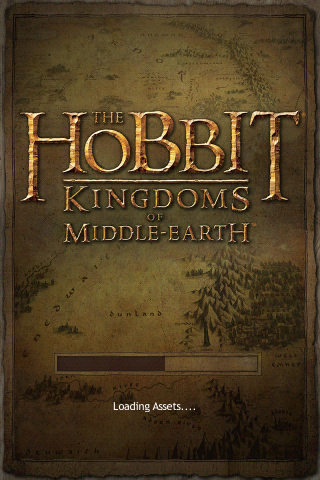 I have been a gamer as long as I can remember. The first (and to this very day probably the best gaming computer ever) was the C64 – alongside an old Atari 2600. Ah, the good old days 🙂 Anyway, through the years I nevers stopped playing, including GameBoy, the PS1 and then PC’s when they finally managed to get away from the 8-bit-sounds and pixelated graphics. I have never been much of a console player but have always appreciated playing them (C&C, man, yesss!) but I think I really started playing for hours on end with Age of Empires. This game opened up the opportunity of playing online, with other players from all over the world and I quickly did so (the same with Battle Realms, Stronghold, Empire Earth and The Lord of the Rings: The Battle for Middle-earth), becoming a household name for quite a few games as ‘Macrobee.’ You may note from the name of some of the games that I am a RTS gamer (real-time strategy) and have only dropped out of in recent years because I went for World of Warcraft instead where I have been kicking some butt as a healer and pvp mage.

Why this introduction? To show you I’m not a total n00b (and yes, I also dabbled in some browsergames, from time to time – the last one was Goodgame Empire) but that for me, having bought my first smartphone only months ago this would be my first ever mobile game to play. I wanted to play The Hobbit: Kingdoms of Middle-earth (KoM) for three reasons: it’s free, it’s a mobile economic sim and it has Tolkien stamped on it. Downloaded it, easy-peasy, and started playing.

And so it begins 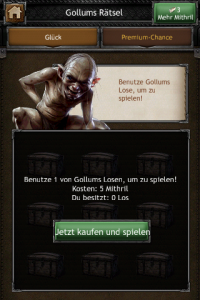 Play a game with Gollum: Tons of treasure chests on his island

The screenshot loading gives you a very nice cut-out from the map of Middle-earth, assets are being loaded and the game begins. You start by chosing to be an elf or dwarf but this does not really make any major difference; only the architecture seems to be different. You get a quick tutorial on what to do and that is very basic, indeed. Legolas tells you will have to erect different kinds of buildings to get ressources, start developing technologies and build up an army. Pretty straightforward and I dived right in.

Loved the beginning because the daily came in directly and it was Gollum himself who offered to play a game with me. You simply touch a treasure chest and can win items, ressources and special abilities. When I entered my city I understood I had to build houses as quickly as possible (the more people live in my city the more money I get in) and then it was all about building up ressource production, that is food, wood, stone and ore. Once you had enough ressources you would learn new technologies which could increase your production levels or enable you to learn new units for your armies. Not to forget – there were quests to fight through which brought you extra ressources. However, those were pretty simple like building a certain number of buildings, a certain level for them etc. 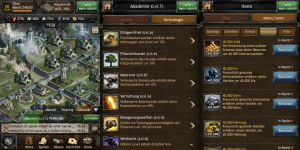 I started clicking all sorts of buttons pretty quickly and realised just as quickly that building a house etc. would be taking a lot of time after a few levels. There are only a few seconds to reach level 2 but after a few more clicks this can take up minutes – and longer. The whole concept is that with every level up more ressources are needed, more time as well and with the technologies this can take days. 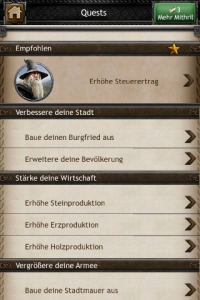 Gandalf, my man, dishing out ressources

And that’s when I started to get curious about the game and its backgrounds. I had by then become member of a guild run by a Lannister (damn you, Game of Thrones) which meant better security and support for each other. For any first class team player this is a must and I soon started shipping ressources to fellow members of my alliance to help them get along in the game. Because there was nothing else I could do. And I had realised that the game had nothing to do with Middle-earth whatsoever. Yes, Gandalf would smile down on me when I went to cash in on my quests and Gollum would entice me to daily games and the map when loading the game was a part of Middle-earth – but except for that? No animated elements, not really many sights, sounds or music. It was just bare clicking, cashing in, clicking again. With everything.

Pardon me but haven’t you done this before?

I had heard of Kabam before but never played any of their games. I bought my first smartphone ever only a few months ago, remember. By the way – it is a Sony Xperia Mini Pro and you can imagine with the chat constantly scrolling down in just two lines and a very cluttered screen to begin with the whole game had a very hectic touch (kind of, until the wait-until-tomorrow-for-technology-to-finish stage came in. Early, that is.) It also produced a nice bug which I would attribute to the software – when sliding out the keyboard the game would crash and I had to restart it. Brilliant. Not to mention connection issues (at the time of writing this game is one of the most downloaded ones in the U.S. for iOs and was crashing all the time) and the fact I couldn’t get my update via Google Play anymore but was supposed to go via the Apple app store.

Well, these might be just minor issues, of course, compared to the truly important things in our universe. But because all things in the universe have happened before I started looking for other reviews who had already had a closer look at KoM and lo and behold: the game is basically nothing but a copy of Kingdoms of Camelot, a game published last year. The only difference is in some of the graphics but even those aren’t too far away – Elven archers are a fairly generic kind of unit in modern fantasy reading, films and games (thanks to Tolkien, I have to say, but then he possibly didn’t envisage things like this.) I am really not surprised that the Tolkien Estate is suing Warner Bros. et al. over this. Can’t be about the quality, right? 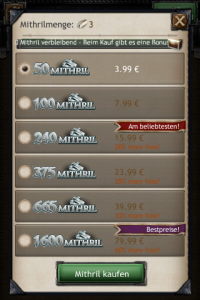 My man Gollum knows all about the bling-bling

Now, if you don’t mind that this game is basically just a copy of another game and if you are new to publisher Kabam’s games, then it’s not a bad game. If you don’t care that the title has nothing to do with its content and there is as much connection between Middle-earth and The Hobbit: Kingdoms of Middle-earth as there is between a lightbulb and the current water level of the River Rhine (there has to be one but I can’t see it yet) then it’s not a bad game. And you if don’t care that this freemium game can only be played if you are willing to dish out some serious money on Mithril – well, then it isn’t a bad game (50 Mithril won’t get you anywhere, by the way – keep level 6 to 7 is worth 70 Mithril and that really isn’t that far up the ladder. You don’t want to know how many different building types there are, either.) And no, don’t tell me it can be played without Mithril. I have seen balanced games and this isn’t one. It takes bloody ages, you need a constand inet connection to stay up to date and then only to hear your phone go ‘bling’ to tell you _one_ item in the production chain finished. I could line up five different army units.

I decided to play until level 20 and see whether I would want to continue. Waiting for a technology to finish for almost two days? Being attacked by gamers who started the game earlier without having a chance to defend yourself (I know how to play an economic sim but this really isn’t well-balanced. I built enough armies to stay safe but many of my guild members didn’t or lost interest in the game early on because of being wiped out all the time)? Looking at a map with a worse graphics quality than the aforementioned C64 without any animation whatsoever? Gathering ressources to finally, finally, finally get one out of five requirements for a new unit finished? Woohoo.

If the game does not radically change after level 20 and I don’t win in the lottery in the next couple of days so I am able to waste loads of dosh on utter nonsense I won’t be playing this game again.

Reasons: Copied game, unbalanced freemium game, no connection between title and content. All screenshots from German version of KoM. All rights reserved with their respective copyright/ trademark holders.