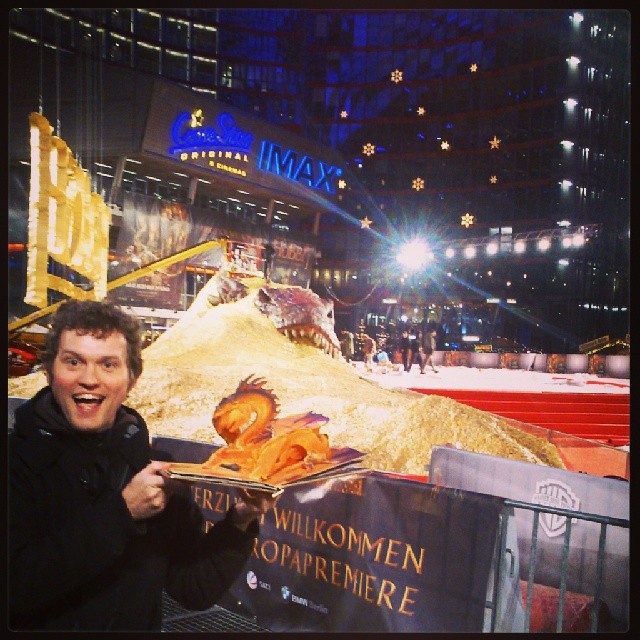 Seven years ago on this day I met up with friends at the Sony Center close to the Potsdamer Square as we were on a mission: The highly publicised European premiere of The Desolation of Smaug was about to happen and most of the cast as well as Peter Jackson would be present. Follow me to Erebor!

Several days before the event took place things were happening and rumours had been spread on the internet that the fans should be expecting something special.

So me living in Berlin became sort of the inoffical biographer of the things happening at the Sony Center. Absolutely fun and exciting!

When we arrived at the local Australian restaurant, the Corroboree, some fans had already been waiting for hours at the very long red carpet which had been added to the Sony Center in Berlin. For many years Berlin had one the biggest IMAX theatres in Europe and this was used for the European premiere of TDoS, alongside the full CineStar cinemas thousands of seats. [It closed on Dec 31, 2019, due to too high rental costs and I managed to see the last Star Wars there at the IMAX; a truly tremendous cinema.]

It looked great on screen but is was incredibly and rainy all the time; that’s why we had gone for the restaurant.

We settled into a large table directly beside the window on the second floor so we sould have an excellent view of all the stars coming up past Smaug. Yup, they had actually shovelled tens of thousands of “gold” coins over a massively huge Smaug that was the backdrop to the red carpet walk-by.

It really was a sight to behold. Not as huge as earlier European premieres but still impressive enough.

This is how our view from the restaurant looked like.

It was a show that lasted for several hours (at least, that’s how it felt like) but as we had food and drink aplenty – thanks, crappy Fosters! – and a great bunch of people with a very strong Tolkien & film background we had tons of fun.

My then wife at one point asked “Who’s the tiny guy with the beard?” and I flatly answered “Peter Jackson.”

You can imagine the style of banter we were having 😉

We were very embarrassed to see this shitshow happening – the German hosts were massive crap with the lady wearing these cheap fake elven ears and the guy actually saying about PJ he is The Lord of the Rings. It was a WB only show for their media channels.

Two people of our group were invited to the premiere – for media and business reasons – and we happily imbibed more alcoholic beverages and great Aussie food until they returned. It took them quite some time.

Fun fact: Directly after the cast and fans started watching the films the space before the cinema was already being dismantled – and the media photographers ran towards the dragon to steal as many coins as they could get so they could sell them on Ebay. You could find them there the same night!

And yes, I needed to do this selfie, of course. Me and Smaug!

I also did a post back in the day on the preparations if you want to see even more pictures and videos!

We made a two-day event out of this – see the other post – so friends from all over Germany could come along and participate in it. Absolutely splendid!

If you want to see how some of the fans lived through the experience at the read carpet see Bazooka Craft, for official press pictures see Imago and Getty.

At the time there was a huge FB group where fans gathered but this does no longer exist.

And yes, I am truly sorry, this was the best Germany had to offer.
Embed from Getty Images