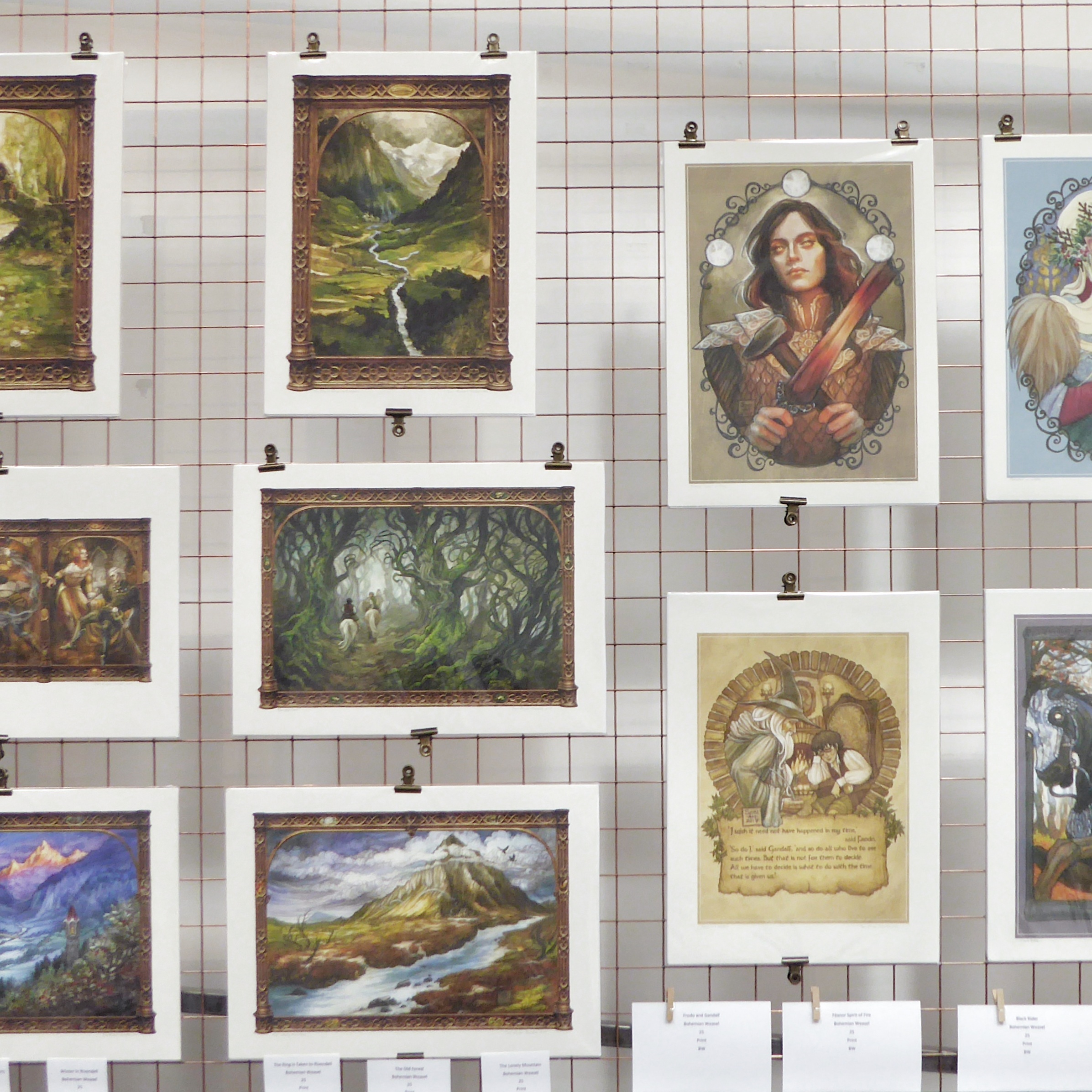 The Tolkien Society is celebrating its 50th anniversary with a party of special magnificence: Tolkien 2019 is happening in Birmingham from August 7 – 11, 2019, and I have the honour and pleasure of being a speaker, a panelist, and part of a comedy show (à la surprise!) in the town Tolkien grew up in. This is my Day 1 Report!

The queue to registration was long when I arrived at around 10ish this morning. The wait was shortened by guest of honour Tom Shippey talking with another conference participant about all sorts of topics and I knew I was in the right place.

Shippey was the keynote speaker and after the introductions given by Tolkien Society chairman Shaun Gunner and the event committee he started the proceedings with his talk on “Heirs of Tolkien? The Major Contenders”, taking Donaldson, Swanwick, and GRRM as examples. I was very happy to see that his first slide used the German Tolkien Society slogan “Without Tolkien, No Fantasy” which I invented many years ago for the promotion of our volunteer work.

I am glad to see the slogan I came up with many years ago ended up in a Tom Shippey talk 😂👍☕@Tolkien2019 #Tolkien2019 @Dr_Dimitra_Fimi @CiteTapisserie @TolkienSociety @Tolkien2019 https://t.co/N1L3aTOOrE

After this talk I managed to head on over to James Tauber who suggested a Tolkien Digital Philology project, first of all outlining the history of philology, how it lost out as an academic field against literary studies, linguistics etc., and how it has seen some comeback thanks to Tolkien’s popularity. He drew up several incredibly interesting options on what the digital treatment of Tolkien’s published works would allow researchers to do and I am keeping fingers crossed for this project!

He as the speaker is today as old as #Tolkien was when the HOBBIT was published. 😊😅

I’d like to stress that the program schedule is so intense it is obviously impossible to see it all and this is only a small selection of what has been done on day 1 alone! You’ll find a lot of material on all the talks on Twitter via the hashtag #Tolkien2019 and on Facebook, of course.

Good for my wallet

I am so glad that I don’t have any money right now because whatever I had with me I’d spend NOW!#Tolkien2019 pic.twitter.com/PR5V7UY95V

I also managed to attend the talk given by the director of the Aubusson Tapestries, Emmanuel Gérard, who introduced the wonderful project to the audience. As I will be attending the ‘tombée du métier’ on “The Trolls” on September 11 I used the opportunity and chatted with him and the opportunities of getting these tapestries on tour to the Tolkien fans all over the world.

There were many wonderful surprises and opportunities for me and all the participants of the conference, for example with the introduction of the Kaffee Klatch, that is a get together with the guests of honour over a cup of coffee and a piece of cake. I sat down with a small number of people with amazing artist Ted Nasmith who charmingly answered all the questions about inspirations, work processes and plans for the future.

And back when I started out in the early 90s I wanted to do philology myself (I did a couple of semesters back then) and had heard of the amazing work Christopher Gilson and the people at ELF were doing. And today I met him for the first time ever 😀

I’m a little starstruck as I have never met Christopher before – and I mean, LANGUAGES ❤️😍😘#Tolkien2019 https://t.co/CpIB7IbJbJ

A fantastic way to end the first day was the Puppet State Theatre rendition of LEAF BY NIGGLE which every single Tolkien fan should try and see. It is beautiful, touching, hilarious.

I’ve had the opportunity of seeing @PuppetStateThtr‘s beautiful rendition of LEAF BY NIGGLE twice now and it proved to me both times #Tolkien‘s smaller works belong on stage.

You know… ‘paint and music and DRAMA’ 😁

Tired now and off to bed, tomorrow is going to be even better!