Tolkien: Maker of Middle-earth at the Morgan Library & Museum in New York City. A review 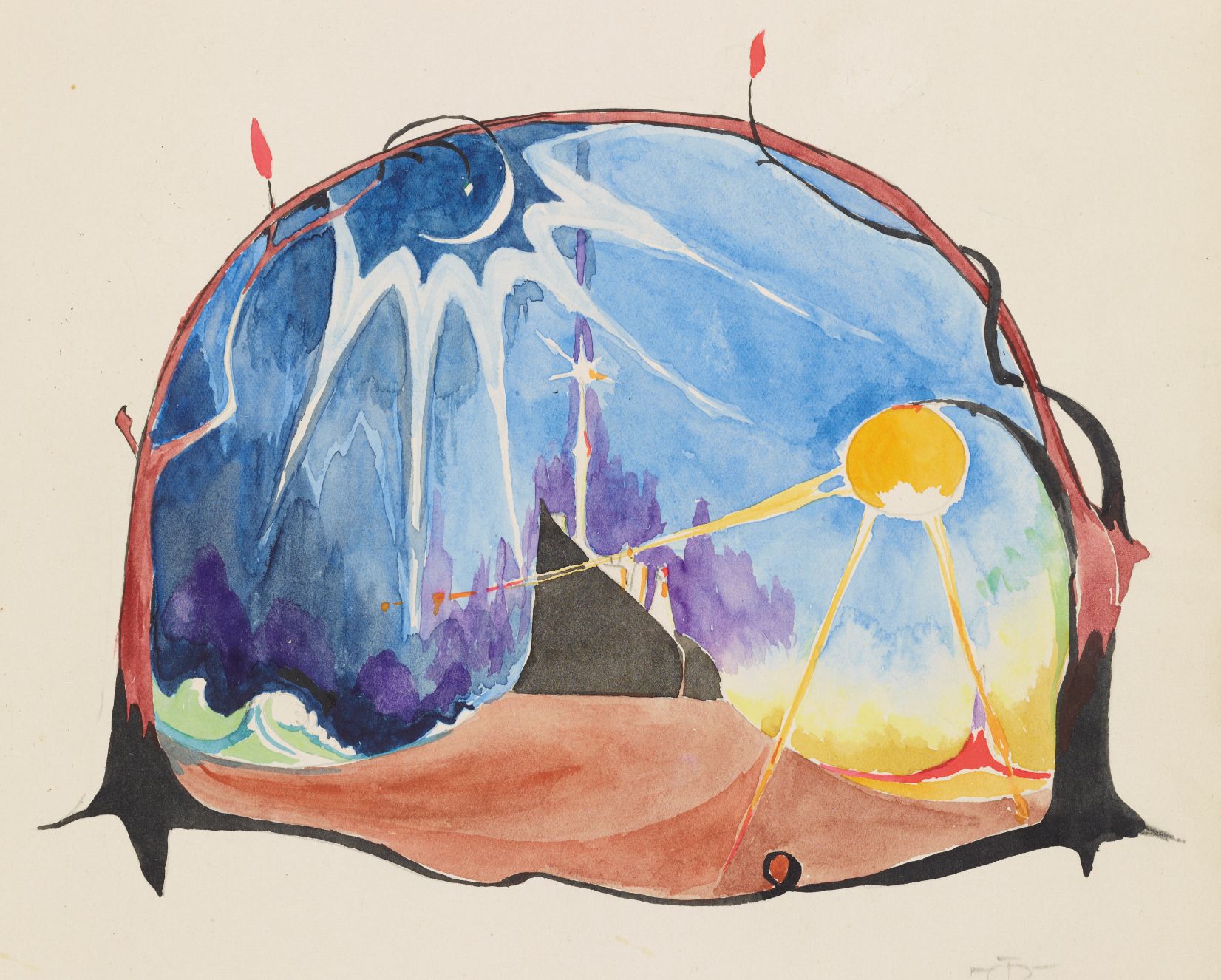 Tolkien: Maker of Middle-earth continues to fascinate and enthuse Middle-earth fans the world over. After its premiere at the Bodleian Libraries in Oxford, its second stop was at the Morgan Library & Museum in New York City. I had the chance of visiting the exhibition in the course of Tolkien Weekend, a two-day event including a symposion, a conference and a pre-screening of the TOLKIEN biopic from March 16-17, 2019, and I would like to share my views on this amazing exibition in this review.

I had the great pleasure of seeing the Oxford exhibition in 2018 (for some reviews of the original installment see here) and I was very much looking forward to seeing it again in New York City. To me there was no question that I had to see it, even it meant going totally broke (I am a freelance translator and I knew right from the start that my job is a wonderful one, if not necessarily on the making-great-money-side of things.) So I booked my flight to New York City after having heard that my dear friends Jessica Burke and Anthony Burdge were going to organise a “Tolkien Weekend” in cooperation with the Morgan Library & Museum which hosted the exhibition. I’ll probably do a longer blog post on my visit to NYC at a later point in time but back to the review at hand. 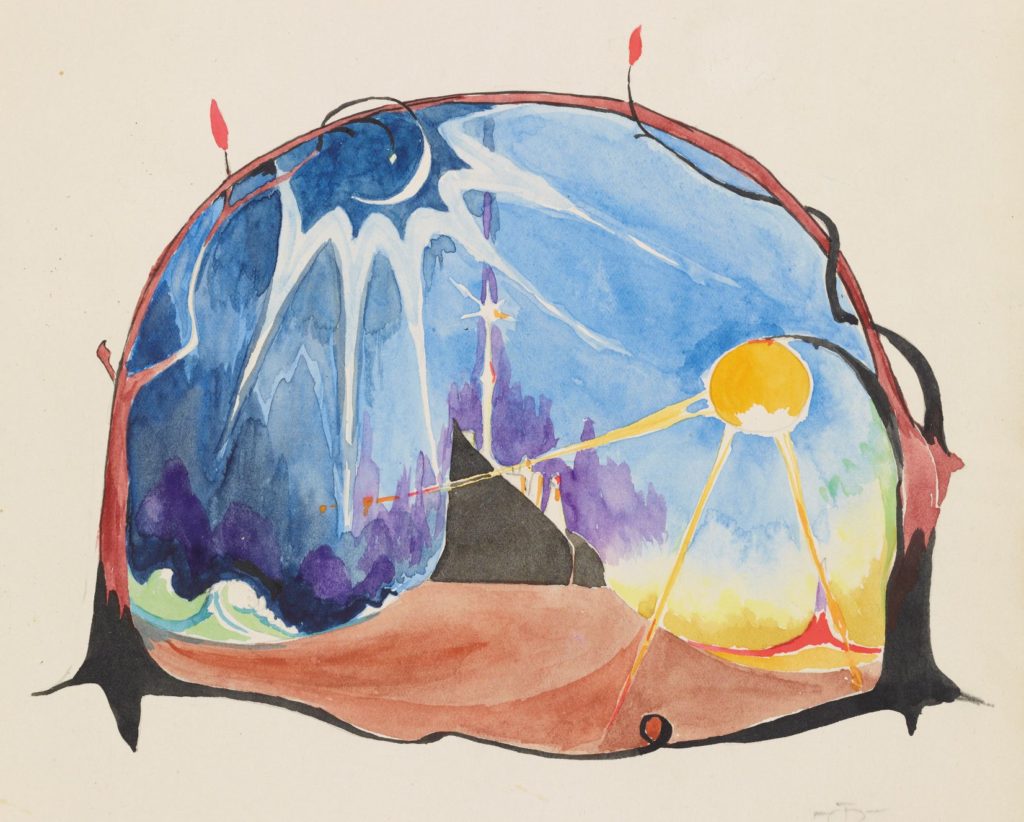 I would like to stress the fact that I am, of course, quietly comparing the New York City version of this exhibition to the Oxford one. I am sure that for many Tolkien fans who have had the opportunity of seeing this exhibition as a ‘first time’ experience their reaction is quite different to my own experience after having already seen the one in England. I will try and stress the outstanding achievement the Morgan Library & Museum have provided the visitors with – particularly the work of its curator John McQuillen I have interviewed in this blog post – but please keep in mind that I may see things slightly different as I am able to directly compare the two exhibitions.

Stepping into the hobbit hole

Visitors entered the exhibition by a hobbit hole door. In fact, it was an enlarged cut-out of J.R.R. Tolkien’s own rendition of Bag-end so you felt like entering Middle-earth right from the start. The exhibition felt very light and spacious even when many visitors crowded into the dedicated exhibition space thanks to the lighting and layout of the room. It offered four bottom-to-ceiling blow up prints of Tolkien art distributed around the room which really drew the eye to their astounding display of colours (for a better view of the exhibition space please have a look at this blog post.) 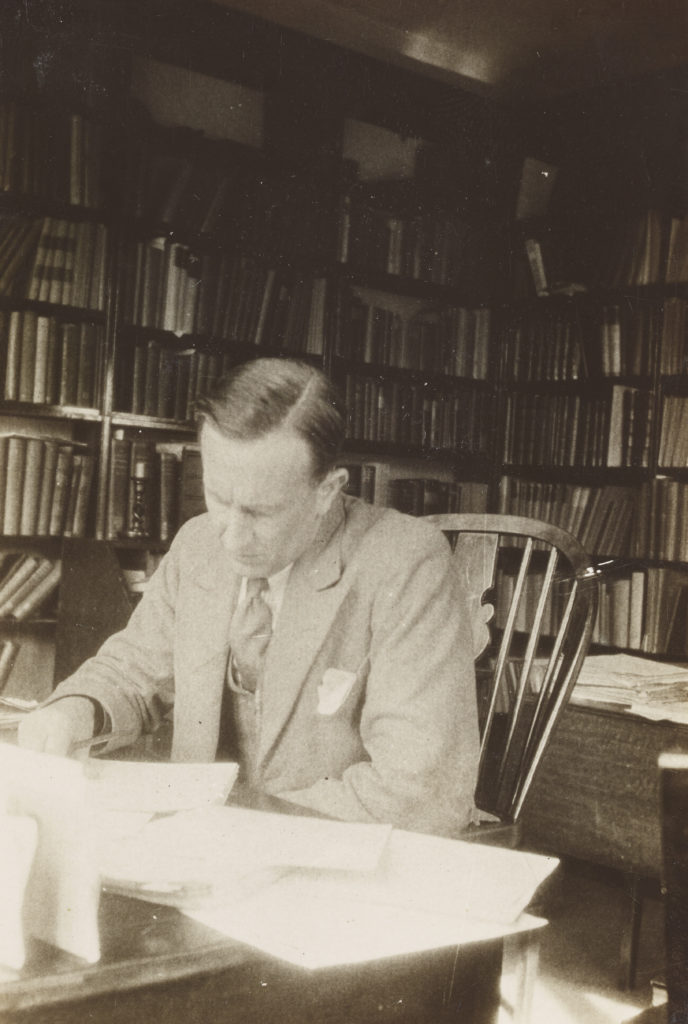 What really surprised me was the opportunity of actually seeing the pieces displayed in a manner you could get really up close to (in Oxford the exhibition room had large, fixed glass cabinets that offered a good view but at a larger distance.) If you hadn’t seen the exhibit items before you wouldn’t have really realised how very small they are in fact and how incredibly detailed many of these tiny sketches, illustrations and drawings are. So the possibility of stepping up close to the protective glass was absolutely riveting and I would have wished for a magnifying glass and a whole day on my own to better have a look at them!

Although this exhibition was only about half the size in exhibit numbers (115 in NYC to well over 200 in Oxford) it offered a great display of Tolkien’s life and works but had to stress certain elements of those in favour of others. The most important parts certainly were the materials provided on The Hobbit, The Lord of the Rings, and The Silmarillion. What certainly drew most of the visitors’ attention was Tolkien’s First Map of The Lord of the Rings, several pieces of paper layered and glued over one another to accomodate the enfolding story – and its changes in the course of the years of writing. 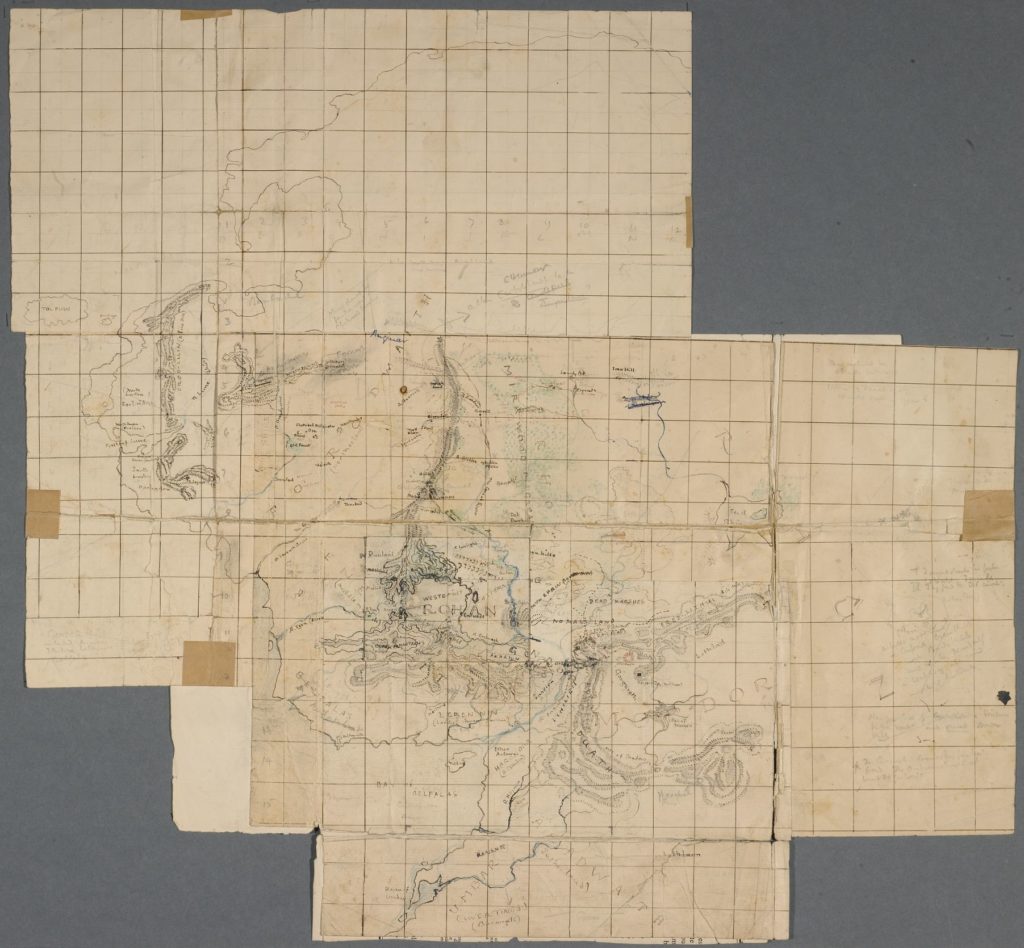 However, it is impossible to name a single item that may have stood out more than others. Every visitor brings a different perspective to an exhibition and some will have loved the floral patterns Tolkien drew on newspaper cut-outs, others will have been amazed by the otherworldly depictions of Ishness or The Shores of Faery. An absolute favourite, though, will have been the photograph of Hilary A.R. and J.R.R. Tolkien as two elfin toddlers, the ever-beloved Tree of Amalion or the ‘kissing book’, a diary in which Tolkien as a student kept account of how many hours he really studied – and would receive kisses from Edith Bratt, his fiancé, accordingly. It’s all about motivation, really.

One item which was displayed very prominently – and which was not shown at the Oxford exhibition – was J.R.R. Tolkien’s D.Litt gown including one of the most famous photographs of the Professor walking away from a degree ceremony he attended in this very gown. This academic dress may not seem something special but there even is a book by R.A. Gekoski titled “Tolkien’s Gown and Other Stories of Great Authors and Rare Books” which may give you a better idea about Oxford University customs (even though the book is not about this particular gown.)

The social media team at the Morgan certainly brought one of the best hashtags into the game with #MiddleearthInManhattan.If you look this up on Twitter or Instagram you will find a huge amount of pictures of people visiting this exhibition who took an incredible amount of effort to actually get there. I know that some people will count the visits of Brie Larson (aka Captain Marvel), Lee Pace (aka Thranduil) and Stephen Colbert (aka Stephen Colbert) as particularly important but I find those of people travelling from all over the USA or even other countries much more interesting.

I also do not pay much attention to the criticism which has been levelled at both the Oxford and the New York City edition, particularly from a conservative Christian points of view on those things ‘missing’ from the exhibition. You have to take the decision of what to present at such an outstanding gathering of materials which has never been seen before – and it is next to impossible to please everyone interested in J.R.R. Tolkien’s life and works. Even Tolkien himself wrote in Letters, no. 160:

It is, I suppose, a tribute to the curious effect that story has, when based on very elaborate and detailed workings of geography, chronology, and language, that so many should clamour for sheer ‘information’, or ‘lore’. But the demands such people make would again require a book, at least the size of Vol. I.[Source: Carpenter (ed.): Letters of J.R.R. Tolkien.]

A special exhibition to show all of the aspects of J.R.R. Tolkien’s life and works is impossible. However, Tolkien: Maker of Middle-earth in its New York City version offers those interested in Tolkien a beautiful glimpse into a creative mind, its workings, its talents, how his inspiration came about. Many consider Tolkien to be ‘merely’ a writer but he was much more than that – he was, first and foremost, a leading academic, a philologist whose imagination was not limited to the pen and paper alone. He often tried to represent his ideas in art, be it calligraphy, water colours or ink sketches. To see how vividly alive this invididual’s imaginative powers were is an achievement any exhibition should strive for – and Tolkien: Maker of Middle-earth at the Morgan Library & Museum managed to do so. 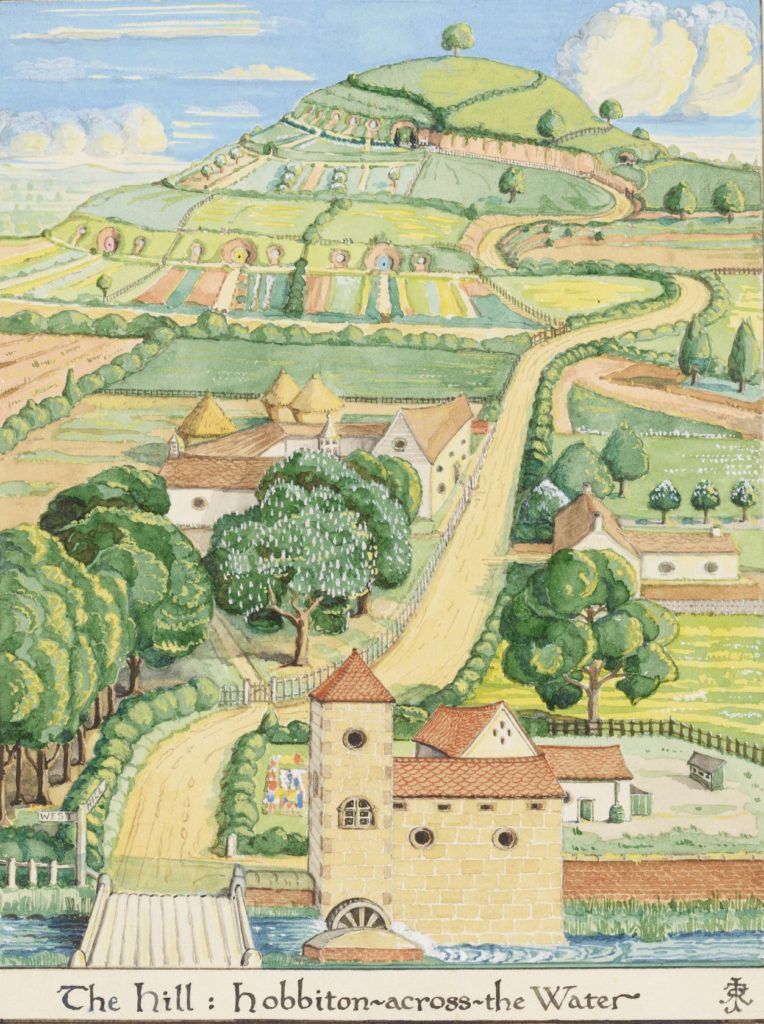 All pictures used by kind permission.