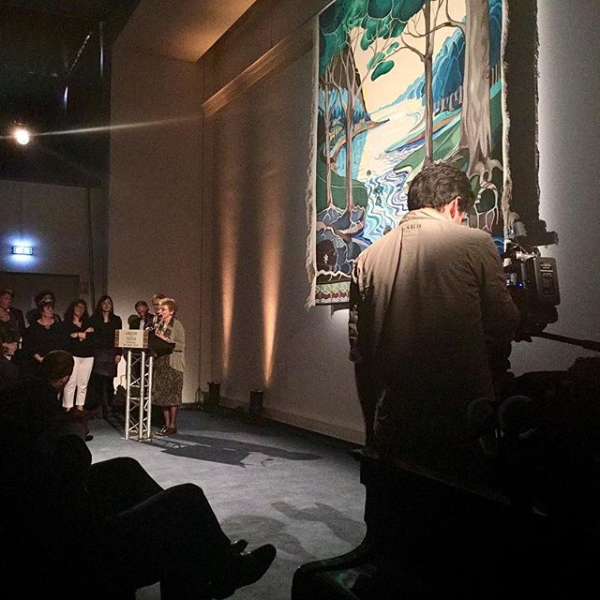 On April 6 the first of several tapestries based on J.R.R. Tolkien’s illustrations was unveiled in a ceremony at Aubusson which is home to one of the most well-known tapestry-producing industries in France. As a representative of the Tolkien family Baillie Tolkien was present, wife to Christopher Tolkien and editor of Letters from Father Christmas. The first picture to be turned into a tapesty was Bilbo comes to the Huts of the Raft-elves.

In a post on the Facebook page of Cité internationale de la tapisserie – Aubusson Baillie Tolkien can be heard saying – in French – that she is absolutely convinced Tolkien himself would have been delighted to see this piece of art come to life.

Baillie Tolkien was asked to cut the last thread of the tapestry as you can see here.

The enthusiasm of the crowd present can be easily seen in this short Instagram video.

Hopefully we will see many more of those tapestries come to life. The hashtag for this project will be #AubussonWeavesTolkien.

You can read up on this project’s origin with the English version of its website here.

Suffice it to say this project has the full support of Christopher and Baillie Tolkien and the Tolkien Estate. All in all, 14 illustrations will be brought to life – the next will be “Taniquetil.”

According to Irish Times journalist Bernice Harrison who was present at the unveiling of the first tapestry the next will be presented in September.

At the museum in Aubusson for unveiling of the first Tolkien tapestry #lacitetapisserie pic.twitter.com/icjcvJHBEl

A local radio station has quite a few pictures and short videos from the event itself.