J.R.R. Tolkien’s “The Fall of Gondolin” to be published in August 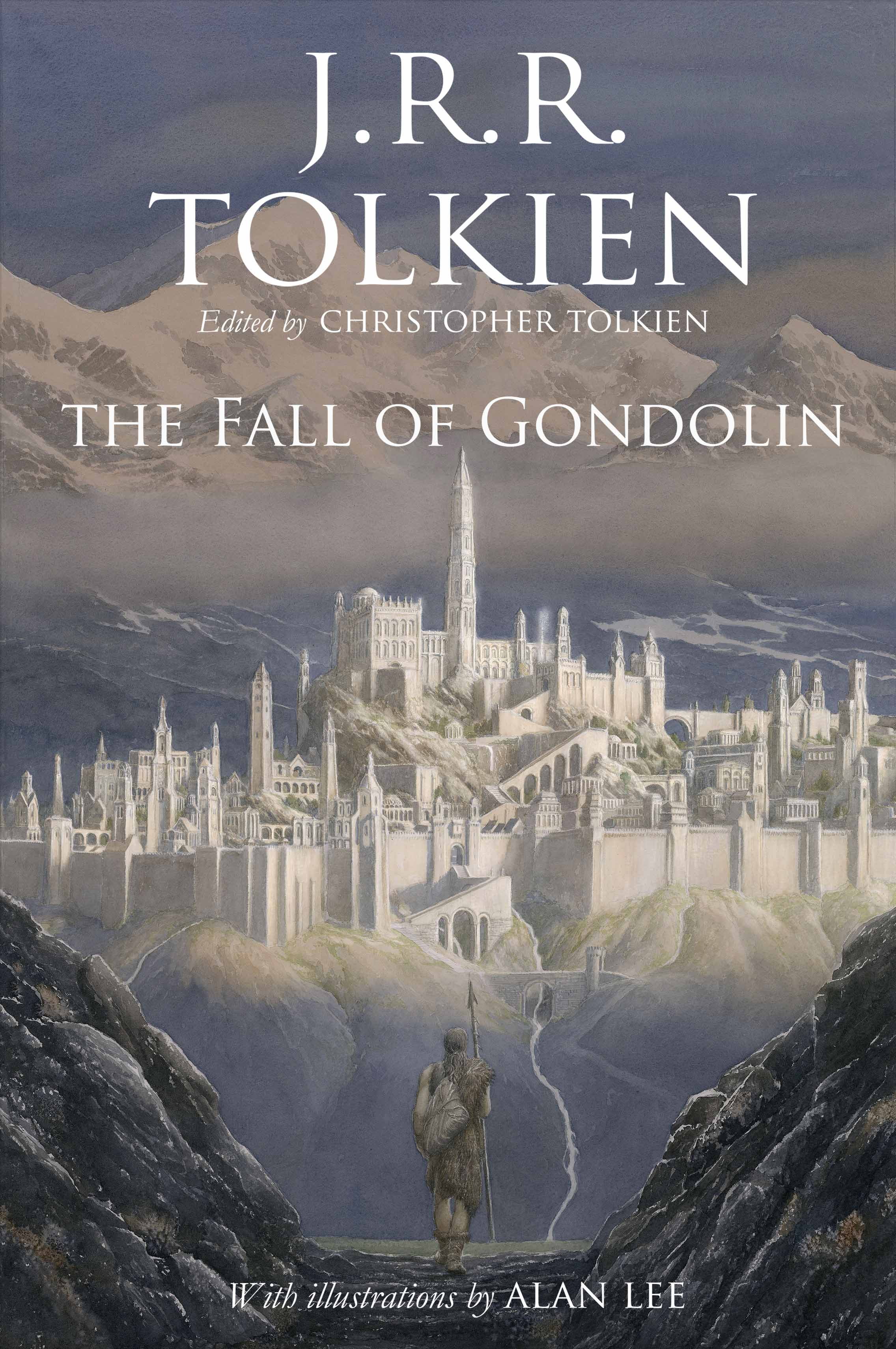 Exciting news from Tolkien publishers HarperCollins: Christopher Tolkien, son of J.R.R. Tolkien and his literary executor, surprises fans the world over with another book taken from his father’s ‘Legendarium’, this time The Fall of Gondolin, to be published worldwide on August 30, 2018.

The Fall of Gondolin: One of the three major legends of Middle-earth

Running to a total of 304 pages, The Fall of Gondolin is the story of the last major kingdom founded by the Noldor to fall to Morgoth’s attacks. It is one of the three most important tales in Tolkien’s creative ventures we know from The Silmarillion besides Beren and Lúthien as well as Children of Húrin.

Following his presentation of Beren and Lúthien Christopher Tolkien has used the same ‘history in sequence’ mode in the writing of this edition of The Fall of Gondolin. 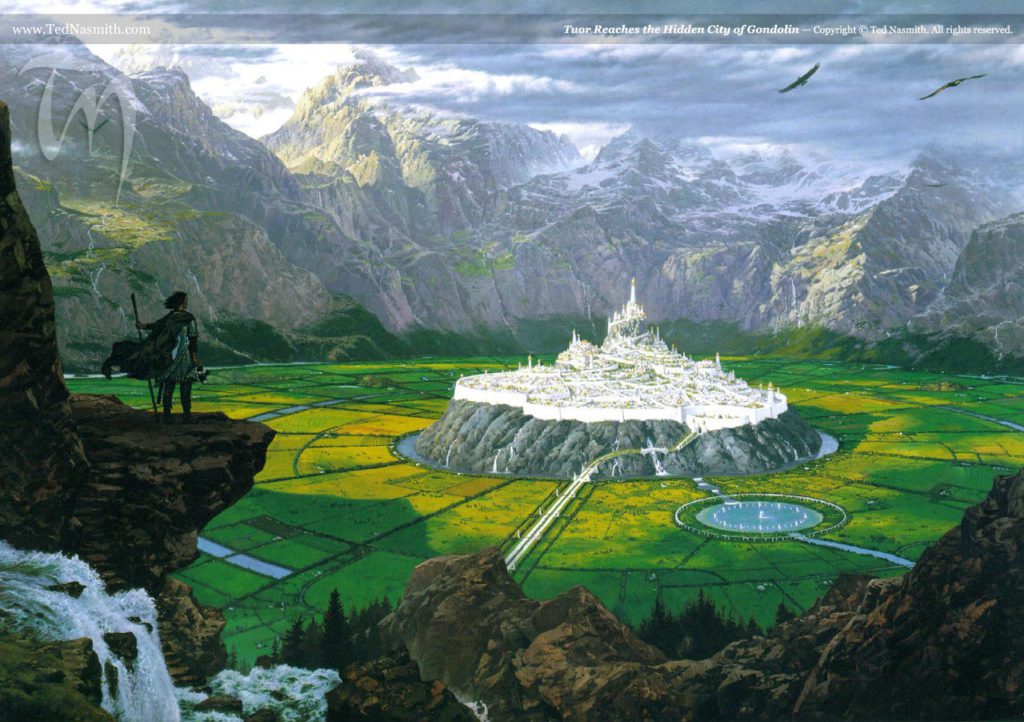 Tuor Reaches the Hidden City of Gondolin, by Ted Nasmith

Fans the world over are now discussing what exactly the book will be made of. Judging from the publishers’ mention of the ‘history in sequence’ mode is seems probable that this publication will tackle the complex editorial issues of J.R.R. Tolkien’s texts in the same manner as it was done with Beren and Lúthien.

The Fall of Gondolin belongs to the earliest stories in Tolkien’s legendarium and – as with many others – has been revised and changed in the course of decades so that a single continous and finished story never emerged from J.R.R. Tolkien’s pen. Meticulously discussed in The History of Middle-earth series by Christopher Tolkien, this stand-alone is obviously meant to provide a glimpse into a version which should be as polished and finished as possible to provide easier access to the complex writings of his father to a much wider audience than before.

Illustrations will be provided by the renowned illustrator Alan Lee who has also worked on the film trilogies by Peter Jackson. 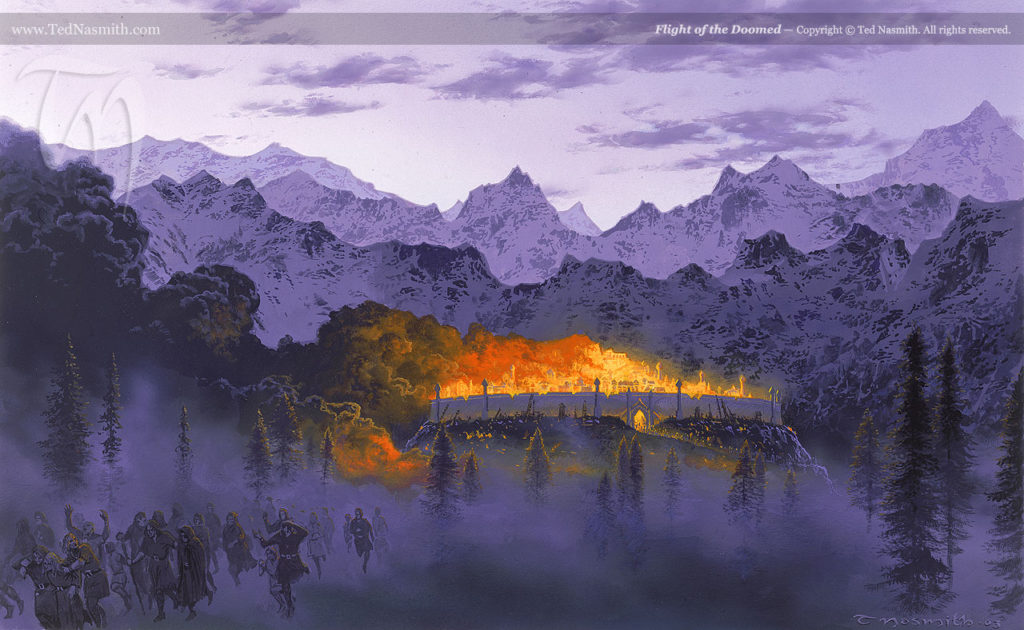 Flight of the Doomed by Ted Nasmith

The announcement on this new book was made on the sadly underused official Facebook page of J.R.R. Tolkien. For further information on J.R.R. Tolkien and his work also have a look at the official website of the Tolkien Estate.

Tolkien expert Nelson Goering has put together what he expects to be the content of the upcoming title:

The book will probably start off with one of Tolkien’s earliest Middle-earth stories, originally called ‘Tuor and the Exiles of Gondolin’, written in 1917 while Tolkien was recovering from trench fever during the first World War. This is in a pretty different style than his later writings, but is a pretty dramatic and exciting (and complete) story about the destruction of a major Elvish city.

The book will probably also have the lengthy fragment ‘Of Tuor and his coming to Gondolin’. This was Tolkien’s attempt to retell the same story many years later, around 1951, in a more novel-like form (it’s in a similar style to The Lord of the Rings, which he’d just finished writing), and is really very good (except for the fact that Tolkien abandoned it long before he got to the dramatic sack of the city).

Both of these texts are already ‘available’, but they’re entertaining stories and it should be nice to have them in a pretty and accessible package. Though I’m already bracing for all the clever comments about money-grabbing and milking…

There will also be quite a bit more stuff, of some type or other. The book is apparently 304 pages, and the two main texts should only amount to 120 pages or so of narrative — even very generously bulked out with commentary, there will have to be more material. Some of this will probably come from the short summary versions of the tale that Tolkien wrote in the 1920s and 30s, but these aren’t very long at all. There will also apparently be a good deal on ‘the Tale of Eärendel, which Tolkien never wrote, but which is sketched out in this book from other sources’. [Source: Nelson Goering.]

Summary of The Fall of Gondolin

The full blurb on this book as provided by HarperCollins:

In the Tale of The Fall of Gondolin are two of the greatest powers in the world. There is Morgoth of the uttermost evil, unseen in this story but ruling over a vast military power from his fortress of Angband. Deeply opposed to Morgoth is Ulmo, second in might only to Manwë, chief of the Valar.

Central to this enmity of the gods is the city of Gondolin, beautiful but undiscoverable. It was built and peopled by Noldorin Elves who, when they dwelt in Valinor, the land of the gods, rebelled against their rule and fled to Middle-earth. Turgon King of Gondolin is hated and feared above all his enemies by Morgoth, who seeks in vain to discover the marvellously hidden city, while the gods in Valinor in heated debate largely refuse to intervene in support of Ulmo’s desires and designs.

Into this world comes Tuor, cousin of Túrin, the instrument of Ulmo’s designs. Guided unseen by him Tuor sets out from the land of his birth on the fearful journey to Gondolin, and in one of the most arresting moments in the history of Middle-earth the sea-god himself appears to him, rising out of the ocean in the midst of a storm. In Gondolin he becomes great; he is wedded to Idril, Turgon’s daughter, and their son is Eärendel, whose birth and profound importance in days to come is foreseen by Ulmo.

At last comes the terrible ending. Morgoth learns through an act of supreme treachery all that he needs to mount a devastating attack on the city, with Balrogs and dragons and numberless Orcs. After a minutely observed account of the fall of Gondolin, the tale ends with the escape of Túrin and Idril, with the child Eärendel, looking back from a cleft in the mountains as they flee southward, at the blazing wreckage of their city. They were journeying into a new story, the Tale of Eärendel, which Tolkien never wrote, but which is sketched out in this book from other sources.