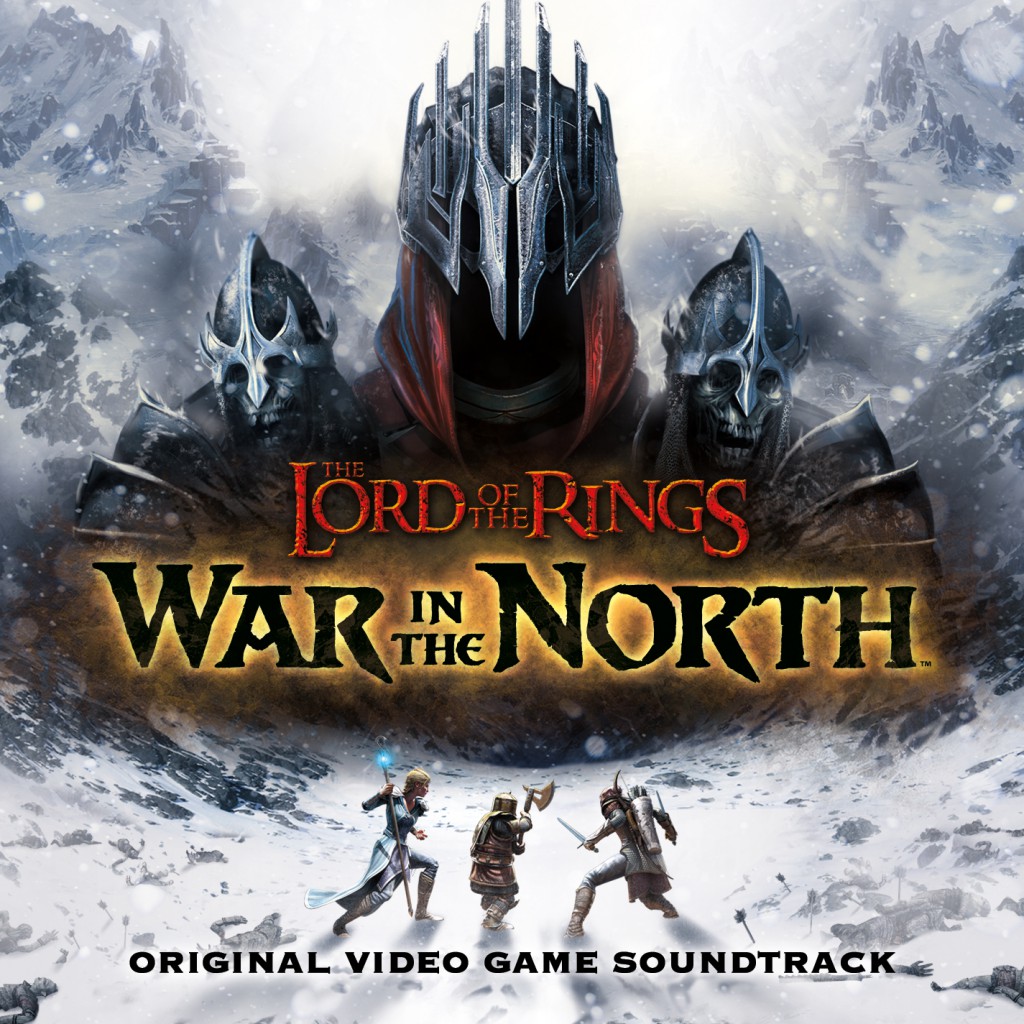 The Lord of the Rings: War in the North. Music by Inon Zur (c) Warner Bros.

FRONT OF WAR IN THE NORTH

So far we have discussed only the beginnings, and most of these works were classical by nature. But there is so much more to be heard. Let’s start with what we did previously, dramatisations. Modern drama does not limit itself to theatre or radio, or even television or films, it extends itself into the world of computer games – and there are lots and lots of Tolkien inspired computer games. In the early 1980s a series of licensed LotR graphical interactive fiction, or text adventure games, was launched based on The Hobbit, (one of which can be found here), today online role-playing games are (or is that were?) very popular, and then there’s everything in between. Some, not all, of those games have their music composed by a composer, and some of those scores are even published. The music varies from a musical sample library to fully composed scores. It’s is only logical that the quality of these score varies from game to game and from composer to composer. War in the North by Inon Zur and The Hobbit by Rod Abernethy and Dave Adams, to name just two of them, are good and decent scores each in their own right. Inon Zur’s is a dark romantic score with vocals and powerful orchestral parts, while Rod Abernathy and Dave Adams produced a more Irish or folk traditional music styled score with some very refreshing re-introductions of well known (folk) melodies.

Mithril and other metals
Ever since Led Zeppelin the rock- and, later on, metal world had shown a profound interest in the Tolkien legendarium. I’m not talking soil or mineral here, no I’m talking about the music genre. The list of inspired works is endless. Perhaps the best known works are those of Blind Guardian with their full length album ‘Nightfall in Middle-Earth’ (1998), but Blind Guardian has also on other occasions demonstrated that they are influenced by the works of Tolkien, a highlight being ‘The Lord of the Rings’, a powerful ballad with beautiful orchestrations to be found on their albums, ‘Tales from the Twilight World’ (1991) and ‘The Forgotten Tales’ (2007), and performed at various live concerts. The band Battlelore has devoted several albums and songs to the Tolkien legendarium. The question really comes down to what kind of metal, if any, you like. Both Battlelore and Blind Guardian are (to an extent) somewhat melodic, symphonic even, and progressive. But there are many other genres of metal and almost all have at least their own band that does something with the Tolkien legendarium.

Of course there are less aggressive rock approaches to music than metal and hard-rock, progressive rock. Just to name an example: in 1974 the progressive band Camel produced their album ‘Mirage’, famous for showing the image of a cigarette package baring the same name as the band. The third track on the original LP was Nimrodel/The Procession/The White Rider, clearly indicating that their inspiration was drawn from Tolkien’s legendarium. A little more recently I was pointed to the Italian formation Ainur. The band clearly has great ambition, given the many leaps of progress they have made from their debut album all the way through to their third full length album. Their first album may need some getting used to, but both ‘Children of Húrin’(2007) and the double full length CD ‘Lay of Leithian’(2009) are fully respectable albums within the genre, in my humble opinion. Their fourth album (The Lost Tales) was released recently in 2013. I haven’t heard that one yet, as I’m awaiting the ‘deluxe’ edition, expected this winter. See their website for more details .

Many great artists have in one way or another paid tribute to Tolkien and his legendarium. To name only a few: we mentioned Led Zeppelin, but does anyone remember Jon Anderson, lead vocalist of Yes and Jon and Vangelis? He collaborated with The Fellowship on their ‘In Elven Lands’ album from 2005. There is some dispute concerning the use of Elvish languages both in the lay-out of the album and in the songs, according to fellow Unquendor member Harm Schelhaas. I’m not a linguist but you be warned none the less. Jon Anderson has a total sum of four contributions to the album in a total of sixteen songs. In my opinion not the most accessible album.
We all know Enya for her contribution to the Peter Jackson ‘Fellowship of the Ring’ film, but are we aware that on her album Shepherd Moons (1991) we can find a track with a very familiar name, Lothlórian? A typical Enya work and if you, like me, like her music you probably already own it.
Bob Catley is most likely to be known for his connection to the British rock band Magnum, but he has several projects on his own including a full length Middle-earth album from 2001. The album was produced by Gary Hughes, the lead vocalist for the band Ten; we know him best for his musical project ‘Once and Future King parts I & II’. The music is very much progressive hard rock with symphonic influences.
We have all come to know the illustrator Ted Nasmith for his work on The Silmarillion. I had not expected him to record his own Tolkien singer-songwriter album ‘The Hidden Door’ (2007). I really like this album. It may take a few listening sessions to get the feeling but it is worth the effort. For me personally a highlight that needs to be mentioned is the next but last track on the album ‘Beruthiel’ a true masterpiece if you ask me. Beruthiel is a queen mentioned in the appendices to Unfinished Tales. Her story is a sad one but beautifully brought to you by Ted Nasmith.

Last but not least – I have to end somewhere – comes author Marion Zimmer Bradley, known for her fantasy novel ‘Mists of Avalon’ and its sequels. She composed several Tolkien songs performed by Brocelïande on their ‘Starlit Jewel’ album from 1996/2000. Brocelïande is an American but “Celtic & Early music Ensemble” band of musicians. Under the pressure of public demand the Starlit Jewel album was re-released.

Music beyond Bree
Is there any music beyond Bree? Oh, my, yes there is. Lots and lots of music I haven’t told you about yet or music I haven’t come across yet. Where do I end an article with so many endless possibilities? Did I do the artists I mentioned justice, and what artists did I do an injustice by not mentioning them? Nothing conclusive can be said about this, because the music keeps on coming, and this will probably only increase after copyrights on Tolkien’s works have expired. A subject that still is a matter of debate. I have to end somewhere even though I’d love to tell you about Rivendell, Christian Geißendörfer, Caprice, Martin Romberg, Andi Grimsditch, Pär Lindh and Björn Johansson, Kim Skovbye, Glass Hammer, Giuseppe Festa, Za Frûmi, James A Stark and many, many more, and really there is just so much space I can use.

Please bear in mind that whatever names are mentioned within this article, it scarcely even scratches the surface of what music lies beneath the wonderful world we came to know through professor Tolkien. It would be impossible to do justice to all those creative artists out there and mention them here or elsewhere. It is therefore that I sincerely apologise here, but I would love to use the opportunity to thank them for all their effort in presenting us their versions and visions of Tolkien’s wonderful world. For now and future generations, please follow forever the call of your hearts and surprise us with your creative works.
I hope none the less you enjoyed this introduction, I surely did enjoy bringing it to you. Perhaps more in a future article from my hand; for now thank you and remember, there are infinite musical possibilities in infinite musical combinations.

Websites:
Here follows a list of websites that might be worthy of your attention and because their respective artists where mentioned in this 3 part article. If you want any or all information other then provided in this article I advice you check out the website www.tolkien-music.com, it has a very complete (if that is at all ever possible) website with enough information to keep you busy for years to come.

The following list is alphabetical on first name of the artist.

Title page to “Lord of the Rings: War in the North” (c) Warner Bros.