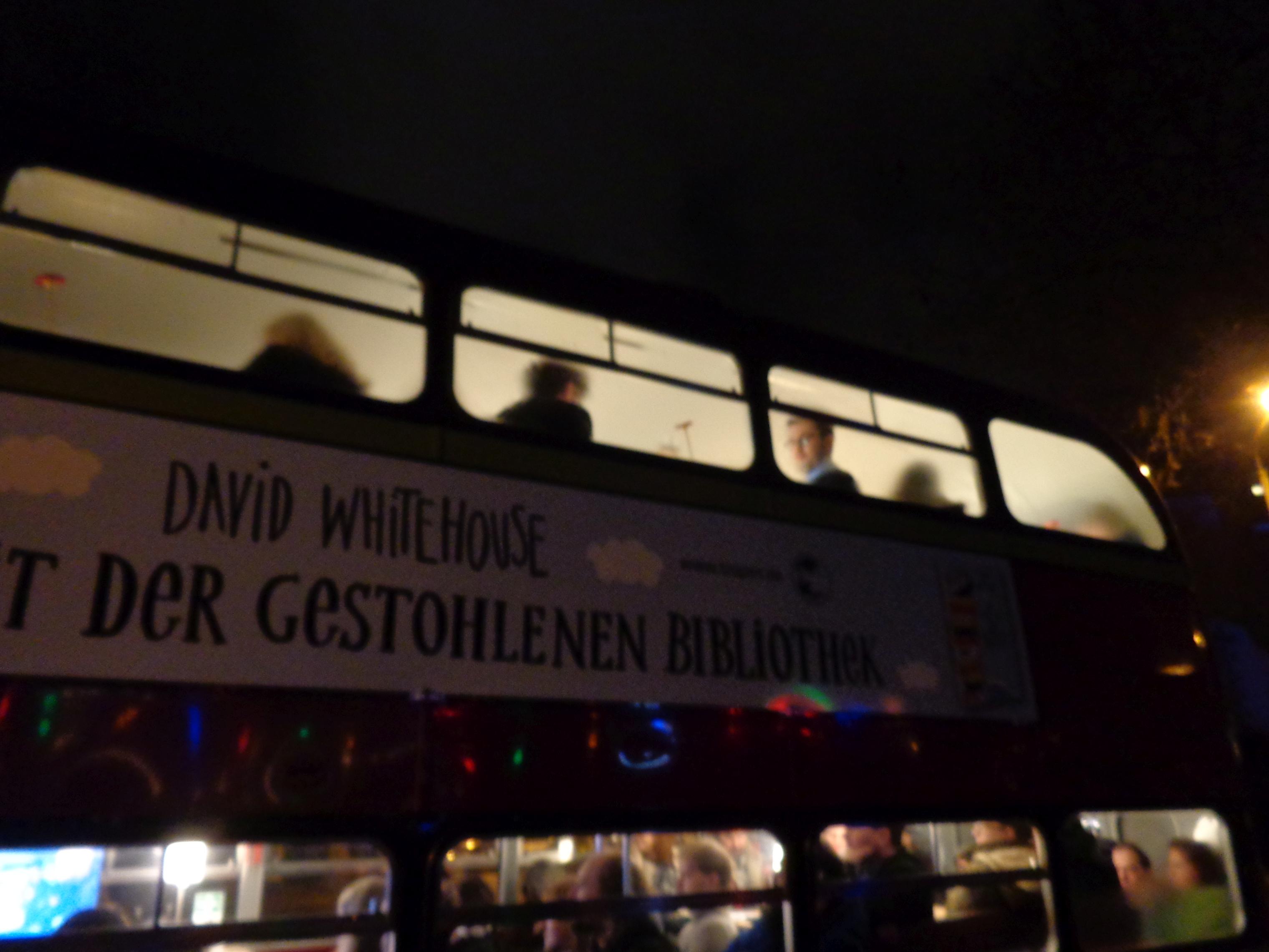 David Whitehouse and the doubledecker bus

I am on my way home to Berlin from this year’s book fair in Leipzig and boy, have those three days been three days to remember. I’ll try to make it as short as possible but then much grander plans have also gone awry … 😉

After my quick and comfortable journey with Deutsche Bahn (who have really upped the ante for 1st class travellers with free wifi and free reservations, kudos!) I went to this great place I found by chance three years ago, Home Planet Hostel in Connewitz. A bunch of truly alternative people have started to run this hostel, renovating the rooms they have themselves and making everyone feel like a king (or a queen) who stays there. I highly recommend it!

Just checked in with my room in #Lepizig #Connewitz on my way to the @buchmesse and it has this lovely enclosed balcony! 🙂 Don’t stay with hotel chains, check out the great hostels they have here! Now I’m off awarding the #Seraph , a literary award on German #fantasy #literature and meeting some friends and colleagues and some great readings, talks etc. Ttyl 😉 #books #bookstagram #reading #writing #love #fun

Another great reason of going there is that it’s really close to the Karli, that is, the Karl-Liebknecht-Straße, the hubbub of student and nightlife in the city – go for the Maitre or Café Puschkin for a great breakfast and the Staubsauger for dancing and surprisingly well done Mai Tais!

After getting settled in quickly I went off for the fair as I met up with a great colleague from one of the publishers I am translating for and had a lovely chat – free coffee to boot! – and then had to run over to the fantasy literature people in Hall 2 where the SERAPH, the literary award for best German fantasy novel and best German fantasy novel debut were to be handed out. As I was part of the best debut jury I was looking forward to find out who won and I am glad to say my favourite choice did so 🙂

However, when we were just preparing to find out the winners and well over hundred fans were in attendance Simone from Papiergeflüster.de came over to me and said: “I need to share this with someone who would understand me. Terry Pratchett has died!” This news quickly spread quickly and a somber atmosphere set on everyone present – I have written about my very personal reasons why this came as a horrible shock.

THANK YOU, @TERRYANDROB. For making me laugh, for making me cry. For making me find the love of my life. Without you and J.R.R. #Tolkien I wouldn’t be where I am today. Thank you. Ein von Marcel Aubron-Bülles (@thetolkienist) gepostetes Foto am 12. Mär 2015 um 11:18 Uhr

It most certainly wasn’t coincidence that the laudatory speeches for the winners drew on quotes from Pratchett’s Interesting Times – those had been prepared a long time before this unfortunate loss. The awards were given out properly to winners Kai Meyer and Akram El-Bahay and I visited the winners’ reading in the city centre but my mind was on other things.

I phoned my wife Sara – who goes by the nickname of Angua as I go by the nickname of Moist von Lipwig – and she was just as shocked as I was. More so, as she is the Pratchett fan as much as I am the Tolkien fan in our relationship (a very odd but extremely entertaining mixture) and we both only met thanks to our favourite authors. That night I bought Raising Steam and went online to share my thoughts with other Pratchett fans out there. Before that I managed to pay the party of German publisher Tropen a visit and see how David Whitehouse’s Mobile Library was presented – in a doubledecker bus from the City of Oxford, lovingly restored by bus-passion.de.

Friday went past just as fast as the first day in Leipzig – meeting up with Hobbitpresse, the German Tolkien publishers, on future cooperations with the German Tolkien Society, then later on with fellow writers and friends from Nautilus and another colleague from a publishing house I will be translating for – not giving it away just yet but will let you know!

And in the evening I managed to watch the 2nd half of Boris Koch’s and Christian von Aster’s reading at Noel’s Ballroom which was splendidly hilarious – two amazing authors renowned for their wit and the irony to boot! I also managed to squeeze in as many pints as possible joining in with the #ToastforTerry, a hashtag Pratchett fans all over the world used with Twitter to pay homage to him.

I then spent a lot of time, effort and money to pay even more homage to him while dancing the night away – it was Friday night, after all! Saturday was all about recovery, spending time talking to great and amazingly creative people at the Werkzeugs booth, a fantasy literature specialist book dealer and event organiser who were so gracious and took me in, free coffee and cookies included! However, the fanboy in me also had something to be excited about:

Yes, the man himself, Patrick Rothfuss on his tour through Germany to present Slow Regard of Silent Things – amazing atmosphere and a great crowd. He was the wonderful, charming and ever patient person he really seems to be if you follow some of his antics on the webs – insightful, entertaining, just a great guy. And from there I had to rush to Leipzig Central railways station to get the train home I am writing this in. One minor point of criticism about the Buchmesse there is: How a major place of trade cannot offer free wireless to its visitors without resorting to bureaucratic obstacles and limiting it to certain small areas is beyond me. If you have the chance of presenting yourself as a customer-friendly and exciting place you would want your customers to spread the word without upsetting them, right? Please change this, it’s really not 21st century to try and make cheap bucks out of wireless internet access on such occasions anymore!

Thank you, @Buchmesse Leipzig for three amazing days. #lbm #2015. Will write up some of my impressions with thetolkienist.com soon. And now home to Berlin. And the wife. And the cat. And more writing, reading, translating. #books #Leipzig #fun #reading #fair #awesome #getting #pickedup #bymygirl 🙂