Listen to rare Tolkien recording: At the Tobacconist’s – and help the British Library save its audio collection

“‘Save our Sounds‘“ is the British Library’s programme to preserve the nation’s sound heritage.” With this statement, the British Library  is addressing one of the most pressing conservatory issues of our times – how to save the recordings made in the last 100+ years. A survey has been started, beginning on January 12 and running until the end of March, 2015, to find out how much material will need to be processed. One of the treasures already saved is an early recording of J.R.R. Tolkien’s voice – a treasure, indeed.

Many sound recording formats, from wax cylinders to digital MiniDiscs, rely on equipment no longer manufactured or supported by technology industries. Other formats, such as magnetic tape or lacquer disc, are fast degrading to the point of irreparability. International consensus holds that we have around 15 years in which to preserve our sound collections. By 2030, the scarcity of older equipment, the condition of recorded media and the loss of skills will make their preservation costly, difficult and, in many cases, impossible. [Source: British Library]

English Conversation: At the Tobacconist’s

Calling this particular piece “rare” is not quite true anymore, at least not digitally. The British Library has made this lovely piece available on their website. There you will find out that two professors, J.R.R. Tolkien and A. Lloyd James, did a recording, for the Linguaphone Conversational Course in English, providing a very entertaining talk of a customer visiting the local tobacconist – after a short introduction fully read by Tolkien. At that time Lloyd James was still only lecturer with the University as an M.A.; he became professor for phonetics later on. However, he had written “Broadcast English” for the BBC, published in 1926, and Tolkien would surely have felt quite comfortable working with Lloyd James who had asked (and answered) the question: “Is there a Standard Dialect in English?”

“Rare” is true for any serious Tolkien collector, though. You can find a collection with the Tolkien Library, containing both records Tolkien spoke for – nos. 20 and 30, suggested to be sold at 600€. 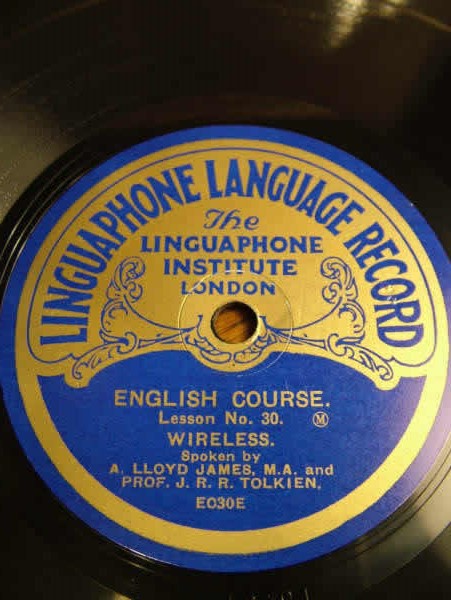 According to the British Library, the recording was made in July 1929; with the Reader’s Guide Scull and Hammond note:

The earliest recording of Tolkien’s voice, as far as is known to us, was made by June 1930 for the Linguaphone Conversational Course in English, issued by the Linguaphone Institute of London as a set of 78 rpm records. Tolkien read the introduction to, and played one of two roles in, Lesson 20, ‘At the Tobacconist’s’, and again was one of two readers for Lesson 30, ‘Wireless’.

As Tolkien did not earn a fortune as a professor with the University of Oxford he would have been delighted at getting this opportunity to make some extra money. Luckily enough for us today, shellac has proven itself to be a fairly reliable carrier of information and Tolkien’s readings were among the first to be saved in the British Library’s ongoing efforts to preserve its holdings for the future. As Hannah Furness with the Telegraph noted, “the public is now able to hear the voices of of Christabel Pankhurst, Florence Nightingale, James Joyce and Noel Coward, as well as decades-worth of theatre productions such as the opening night of the Old Vic’s Hamlet directed by Sir Laurence Olivier.” And yes, J.R.R. Tolkien’s voice, too. 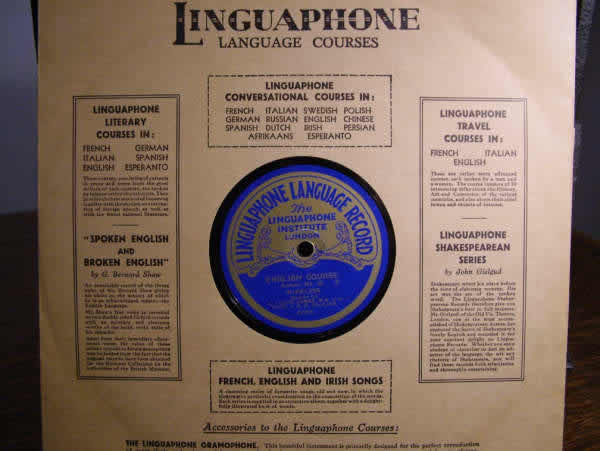 Save our sounds. The British Library’s project.

Early spoken word recordings. At the Tobacconist’s. With the British Library.

Thank you to David Doughan for reminding me this is a shellac record, not a vinyl one.