The trolls. © Warner Bros. Entertainment Inc. All rights reserved. THE HOBBIT: AN UNEXPECTED JOURNEY and the names of the characters, items, events and places therein are trademarks of The Saul Zaentz Company d/b/a Middle-earth Enterprises under license to New Line Productions, Inc.

If you have read The Hobbit by J.R.R. Tolkien you will have come across one of the early scenes in the story where Thorin & Co. and Bilbo are caught by three disgusting trolls called Tom, Bert and William who then proceed to discuss whether “they should roast them slowly, mince them fine and boil them, or just sit on them one by one and squash them into jelly.” Recent research findings suggest that Tolkien’s depiction of those trolls is rather more realistic than most readers would imagine.

Erin E. Buckels and Paul D. Trapnell of the University of Manitoba, Winnipeg, Manitoba, Canada and Delroy L. Paulhus of the University of British Columbia, Vancouver, British Columbia, Canada have published an article called Trolls just want to have fun which will appear in Personality and Individual Differences and is available via Academia.edu as a PDF download. You will also be able to download a presentation on this via Erin E. Buckels’ Academia.edu profile.

Even if you only spend a small amount of your time on the internet you will have met them – online trolls. As the researchers note “online trolling is the practice of behaving in a deceptive, destructive, or disruptive manner in a social setting on the Internet with no apparent instrumental purpose.” You will then usually hear the warning call “do not feed the trolls.” And there is good reason not to feed them because trolls don’t stop! [For further information on the troll face phenomenom check out KnowYourMeme.com.] 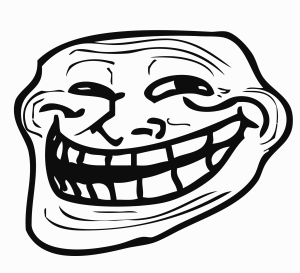 Buckels, Trapnell and Paulhus provide interesting insights into the existence of online trolls: “Both trolls and sadists feel sadistic glee at the distress of others. Sadists just want to have fun … and the Internet is their playground! (…)  Our research suggests that, for those with sadistic personalities, that ideal self may be a villain of chaos and mayhem – the online Trickster we fear, envy, and love to hate: the cybertroll.” Now, with any ongoing research in a particular field – and the authors of this article clearly emphasize the need for further research into the question at hand – those findings will probably motivate other researchers to work along the so-called Dark tetrad (narcissism, Machiavellianism and psychopathy) and its influence on online behaviour and vice versa and that seems to be a rather necessary field of research. According to this news post “there are an estimated 8.3 million online trolls in the United States alone. That’s 8.3 million out of 254 million Internet users” (based on the research statement that “5.6% reported enjoying trolling other users” – but wouldn’t 5.6% out of 254 million internet users in the US be about 14.2 million?)

Whatever the number crunching could give you in the US, Canada or any other country – the numbers of the trolls are too large to fight against them in any meaningful way. Bucknells et al. also ask: “Do antisocial persons use technology more than others because it facilitates their nefarious goals/ motives? The findings of this study suggest that this is indeed the case, but more empirical work is needed. Some authors go further to argue that use of Internet technology actually shifts users in an antisocial direction.” Fooder for all of those internet critics to finally clamp down on the free use of it, I’d presume.

Whatever your experience with cybertrolls don’t ever forget – for them there is no dawn that will turn them to stone. In fact, if you give them the least bit of attention they will thrive on it – so if you find someone on the web displaying a minimum of six of the Top 12 Signs You’re Dealing With Trolls you should possibly run. You ain’t Gandalf!

Tolkien connection: As with other creatures of sagas and fairy-tales trolls suffered the same fate in the 19th century as fairies – they were “down-sized” and turned into small, powerless creatures living underground, comparable to the Danann (see Etymology Online entry.) Tolkien went out for the rescue and turned the fairies -> elves back into the powerful beings they (should) have been and the trolls into the monstrous giants they used to be.

In two online studies (total N = 1215), respondents completed personality inventories and a survey of their Internet commenting styles. Overall, strong positive associations emerged among online commenting frequency, trolling enjoyment, and troll identity, pointing to a common construct underlying the measures. Both studies revealed similar patterns of relations between trolling and the Dark Tetrad of personality: trolling correlated positively with sadism, psychopathy, and Machiavellianism, using both enjoyment ratings and identity scores. Of all personality measures, sadism showed the most robust associations with trolling and, importantly, the relationship was specific to trolling behavior. Enjoyment of other online activities, such as chatting and debating, was unrelated to sadism. Thus cyber-trolling appears to be an Internet manifestation of everyday sadism (my emphasis). [Article abstract.]

Trolls: © Warner Bros. Entertainment Inc. All rights reserved. THE HOBBIT: AN UNEXPECTED JOURNEY and the names of the characters, items, events and places therein are trademarks of The Saul Zaentz Company d/b/a Middle-earth Enterprises under license to New Line Productions, Inc.