Update your blogroll to include some great Tolkienists 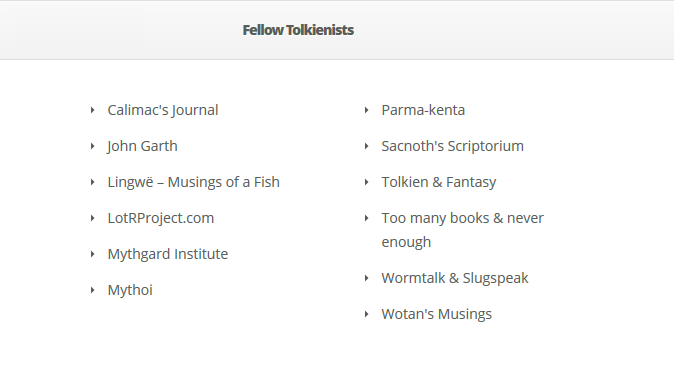 Update August 2021: Seven years since I first posted this list of interesting blogs to follow and I am working on an update right now.

When I recently worked on a few articles and browsed the web I realised that one of the best Tolkienist blogs out there had added me to their blogroll (not giving away who but still very happy about it!) Now you may think “what’s in a simple link list? that’s so 1995?” but it is not. Blogrolls offer the opportunity of showing you, the reader who is interested in this blog, who else out there is a great place to visit. And it is more than just a few suggestions, it does tell you who the particular blogger in question truly appreciates. So a blogroll is a must (well, at least to me.)

I have updated my blogroll to mirror the recent weeks and months of Tolkienist writings out there and if you think there is someone else I should definitely place there shoot me an email!

However, I have to make it clear that I do reserve the right to turn down any suggestions and/or offers to be part of my blogroll. This is in no way a judgment on the quality of the blog in question, just a question of personal preference and the limits of a blogroll – putting one gross of blogroll links out there might be fun but is in no way useful!

Active blogs with a specialty in Tolkien*

Calimac’s Journal. David Bratman has been puttering around Tolkien studies since being the first person to publish a Tale of Years for the Elder Days a month after The Silmarillion appeared in 1977. Since then he’s been editor of Mythprint for the Mythopoeic Society, author of “The Year’s Work in Tolkien Studies” for the journal Tolkien Studies, and author also of articles on textual revisions in The Lord of the Rings, on the road through The History of Middle-earth, on the geography of Tolkien, on music and Tolkien, and on the history and personnel of the Inklings. When not Tolkiening, he’s a librarian and an arts critic. He lives in California with his lawfully wedded soprano and two cats. Visit his blog and his website.

Tolkien & Fantasy. Douglas A. Anderson is the author of The Annotated Hobbit.   (1988; revised and expanded edition 2002). He was co-editor (with Michael D.C. Drout and Verlyn Flieger) for volumes one through eight of Tolkien Studies: An Annual Scholarly Review. His anthologies of fantasy literature include Tales Before Tolkien (2003); Seekers of Dreams (2005); H.P. Lovecraft’s Favorite Weird Tales (2005); and Tales Before Narnia (2008).

John Garth. Journalist and author of Tolkien and the Great War. He has only recently started his blog and is publishing material which did not make it into the finished book – well worth the read, particularly on the origins of Middle-earth.

Sacnoth’s Scriptorium. John D. Rateliff is a writer, editor, and independent scholar. For many years, he worked with the Tolkien manuscripts at Marquette University and has written extensively on Tolkien and the Inklings, including The History of the Hobbit. He lives in Seattle with his family.

Too many books & never enough.The weblog of Wayne G. Hammond and Christina Scull, husband and wife authors and book-collectors. Christina is the former librarian of Sir John Soane’s Museum in London, England. Wayne is Assistant Librarian at the Chapin Library of rare books at Williams College in Williamstown, Massachusetts. They are well known as scholars devoted to J.R.R. Tolkien, Arthur Ransome, and the artist Pauline Baynes. Further biographical and bibliographical information may be read on their website.

Wotan’s Musings. A blog set up by Andrew Higgins to track his current studies of the linguistic works and art languages of J.R.R. Tolkien and for his explorations into ancient, medieval and yes even some modern languages of Europe including Anglo-Saxon, Welsh, Old Norse, Gothic, Russian, Portugese and Finnish.

Active blogs with Tolkien content as a secondary subject

Blogs with Tolkien-related content posting only irregularly or inactive

P.S. Not much of a surprise that these blogs stopped around 2015 after the last tremors of the so-called Hobbit film trilogy subsided. Many of us have been starving for more Tolkien content for five+ years.

Lingwë – Musings of a Fish. Jason Fisher is the author of Tolkien and the Study of his Sources, providing great insights into possible everyday (and not so everyday) links and connections to Tolkien’s works.

Wormtalk & Slugspeak.Michael Drout is Professor of English and Director of the Center for the Study of the Medieval at Wheaton College, Norton, Mass., where he teaches Old English (Anglo-Saxon), Middle English, medieval literature, fantasy, science fiction and writing. He is the author of Beowulf: The Monster and the Critics.

The Tolkien Library site was started by Pieter Collier in November 2002 with the purpose of becoming a resource for serious Tolkien Collectors and has done much more since then.

Parma-kenta. Troels Forchhammer‘s blog is an ‘enquiry into the books & thoughts on the works of J.R.R. Tolkien and related subjects’;  as well as home to Tolkien Transactions which used to be a monthly publication of all things important in Tolkien studies.

Mythoi. Morgan Thomsen is the creator of Tolkien Index. He is co-editor with Shaun Gunner of ‘Two Swedish Interviews with J.R.R. Tolkien’ (Hither Shore 9, 2013), and co-editor with Daniel Helen of ‘A Recollection of Tolkien: Canon Gerard Hanlon’ (Mallorn 54, 2013). Contact: email.

Lord of the Rings Project, commonly shortened LotrProject, is a creative web project dedicated to the works of J.R.R. Tolkien. It is perhaps most known for the extensive and ever updating genealogy, the historical timeline of Middle-Earth and the statistics of the population of Middle-Earth and is run by Emil Johansson.

* I am not going to count posts, posts’ length, number of words etc. to determine a blog’s supposed relevance – if a blog posts 33 times on water melon recipes but the next 3 are excellent Tolkien-inspired blog posts then this is a blog with Tolkien content. If, however, that blog has 33 water melon recipes, 2 posts on CSL, and 1/2 on Tolkien then this is a water-melon-heavy CSL and/or Inklings blog. Complaints will be bombadilled.