I am very glad to start a series of interviews with fellow Tolkienists all over the world, presenting their societies, smials or special interest groups. This very first interview with Eleanor Farrell who has recently been named ‘Social Media Butterfly’ for the Mythopoeic Society will give you a chance to learn more about this wonderful organisation and its approach to social media. In the self-portrayal on its official website, www.mythsoc.org, it is described as “a national/international organization promoting the study, discussion, and enjoyment of fantastic and mythopoeic literature through books and periodicals, annual conferences, discussion groups, awards, and more. We are especially interested in the works of J.R.R. Tolkien, C.S. Lewis, and Charles Williams, prominent members of the informal Oxford literary circle known as the “Inklings” (1930s-1950s).” This should give you a hint why I am talking to Eleanor today. 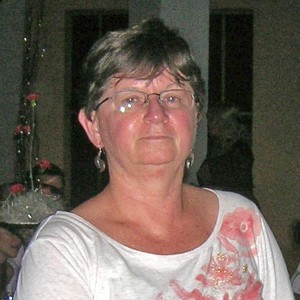 Hi Eleanor, thanks for agreeing to answer some questions for TheTolkienist.com. However, first of all, congratulations on being named the Social Media Butterfly for the Mythopoeic Society. What does such a Butterfly do?

Thanks, Marcel. I’ve been involved with the Mythopoeic Society for several decades; I’ve served on the Council of Stewards (our governing board) as newsletter editor and awards administrator, and I also created our first web site, way back when. I work as a graphic designer, and I’ve been interested in the growth of social media and how it can be used for networking and marketing, especially for small non-profit organizations. So when I started exploring the opportunities in this area, it seemed ideal to use the Society as a model, and I’ve volunteered to create and manage a selection of social media accounts. Our goal is to make more people aware of the Society and our activities—including our annual conference (Mythcon), our awards for mythopoeic literature and scholarship, and our publications (the Mythlore journal and books published through our Mythopoeic Press)—and to attract more members.

We already had Facebook, Google+, and Twitter accounts, but were only using these sporadically. I’m adding accounts with Pinterest, Goodreads and LinkedIn (and am interested in additional options as these get popular), and trying to generate more activity on the existing and new sites through regular updates and news announcements, discussions about books and more, and fun things like book giveaways and trivia contests. Hopefully we will get feedback from our members with more ideas.

With the digital revolution and obviously the films Tolkien fandom has changed substantially. Do you think there still is a place for ‘old-fashioned’ literary societies – or is having a new social media butterfly a sign of those societies adapting to the challenges a new and often very young fandom poses?

I think there will always be a place for people who love books to connect, whether these be college classes, coffee-house-style book clubs, professional organizations, or online communities. Bringing in members of “new fandom” is definitely a challenge: when the Mythopoeic Society was founded in 1968, fantasy readers had to look hard and long to find each other (even locally!), whereas now it’s easy to find like-minded readers from all over the world and to be able to connect with them instantly through online communities. We are just starting to explore this world and trying to figure out what the “new” fans are looking for so that we can include them in our activities. 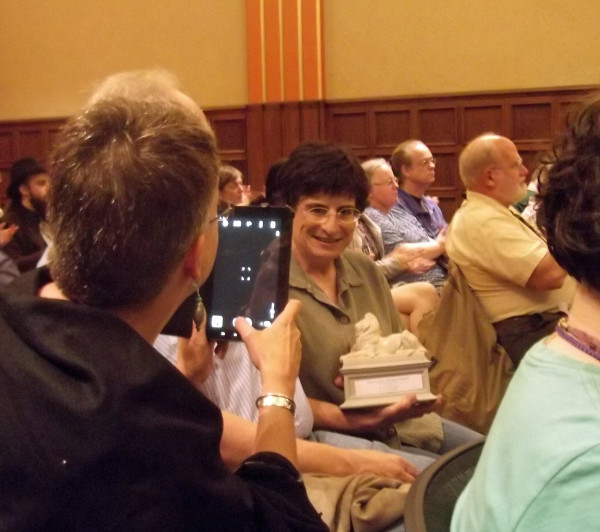 Susan Palwick uses her iPad to take a photo of Lisa Goldstein with her Mythopoeic Fantasy Award lion statuette, at the Mythcon 43 post-banquet award presentations. (Photo by Lynn Maudlin)

Are there any particular events and campaigns you are going to promote via your social media channel in the future? You just had a giveaway for 333 followers on Twitter – will Tolkien fans in the U.S. see more of this?

Yes, even on the small scale of the Society’s current social media presence, we were encouraged by the response to our first Twitter giveaway—our followers grew from 300 to over 350—and we’ll be looking at more of these promotions: maybe some trivia contests, or e-prizes that can be offered to non-US followers as well as US-based ones. As for events, the annual Mythopoeic Conference is our main activity, and we’ll be heavily promoting Mythcon 44: July 12-15, 2013, in East Lansing, Michigan. (URL: http://www.mythsoc.org/mythcon/mythcon-44/). Registrations and room and board packages are available for purchase, and the Call for Papers deadline is April 30th.

Thank you very much for your time, Eleanor.

The Mythopoeic Society is a national/international organization promoting the study, discussion, and enjoyment of fantastic and mythopoeic literature through books and periodicals, annual conferences, discussion groups, awards, and more. We are especially interested in the works of J.R.R. Tolkien, C.S. Lewis, and Charles Williams, prominent members of the informal Oxford literary circle known as the “Inklings” (1930s-1950s). We are a non-profit organization under section 501(c)(3) of the Internal Revenue Code, incorporated in California.

Scholars of the Inklings had observed that these men all created myth, so Society founder Glen GoodKnight borrowed a Greek adjective meaning “myth-making” as the name of the Society. Although the Inklings were all Christian authors, the Mythopoeic Society strives to follow what GoodKnight called “the Middle Way”: neither denying the religious beliefs and purposes of our three core authors, nor serving as an organization seeking to propagate those beliefs; and while urging the importance and relevance of our central authors, avoiding the trap of becoming a “cult of personality” for any one of them.

We define this as literature that creates a new and transformative mythology, or incorporates and transforms existing mythological material. Transformation is the key — mere static reference to mythological elements, invented or pre-existing, is not enough. The mythological elements must be of sufficient importance in the work to influence the spiritual, moral, and/or creative lives of the characters, and must reflect and support the author’s underlying themes. This type of work, at its best, should also inspire the reader to examine the importance of mythology in his or her own spiritual, moral, and creative development. Our members are a diverse lot, and their individual definitions of mythopoeic literature and its authors are equally diverse.