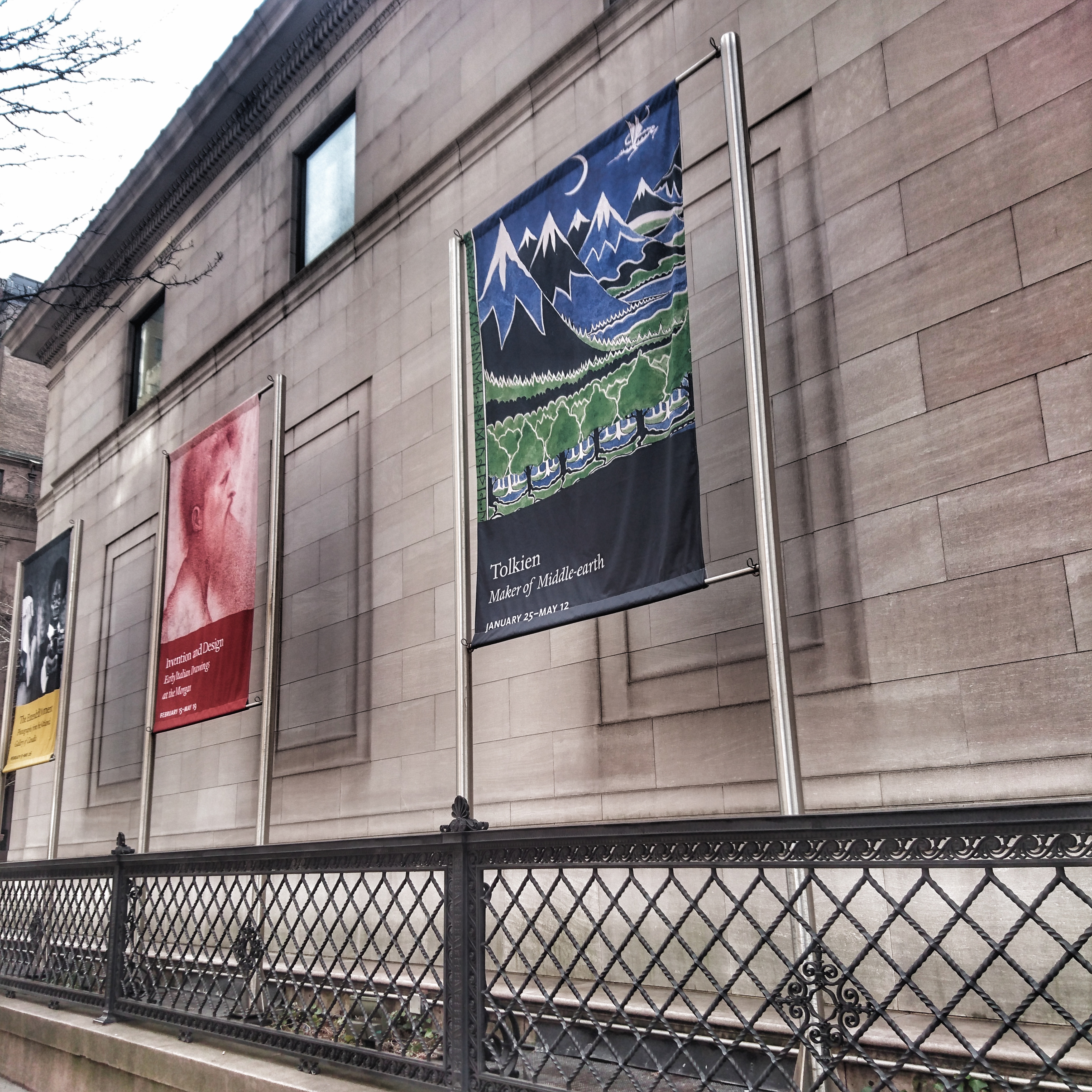 Following the vernissage on January 25th, 2019, the New York City version of the exhibition Tolkien: Maker of Middle-earth generated considerable interest in the media and I’d like to remind you of some of the best ones.

Tolkien’s World: An Exhibition Transports Us to Middle-earth

J.R.R. Tolkien — the artist, the writer, the scholar — is the subject of an exhibition at the Morgan Library & Museum. The show is a comprehensive view of his alternate reality.

If you have ever opened a fantasy novel and found a map, you most likely have J.R.R. Tolkien to thank. He probably deserves some credit, too, for inspiring future fantasy writers to create their own languages. And if you’ve ever completed a book and found that there’s an online encyclopedia dedicated to its world and mythology — that’s also thanks to Tolkien. 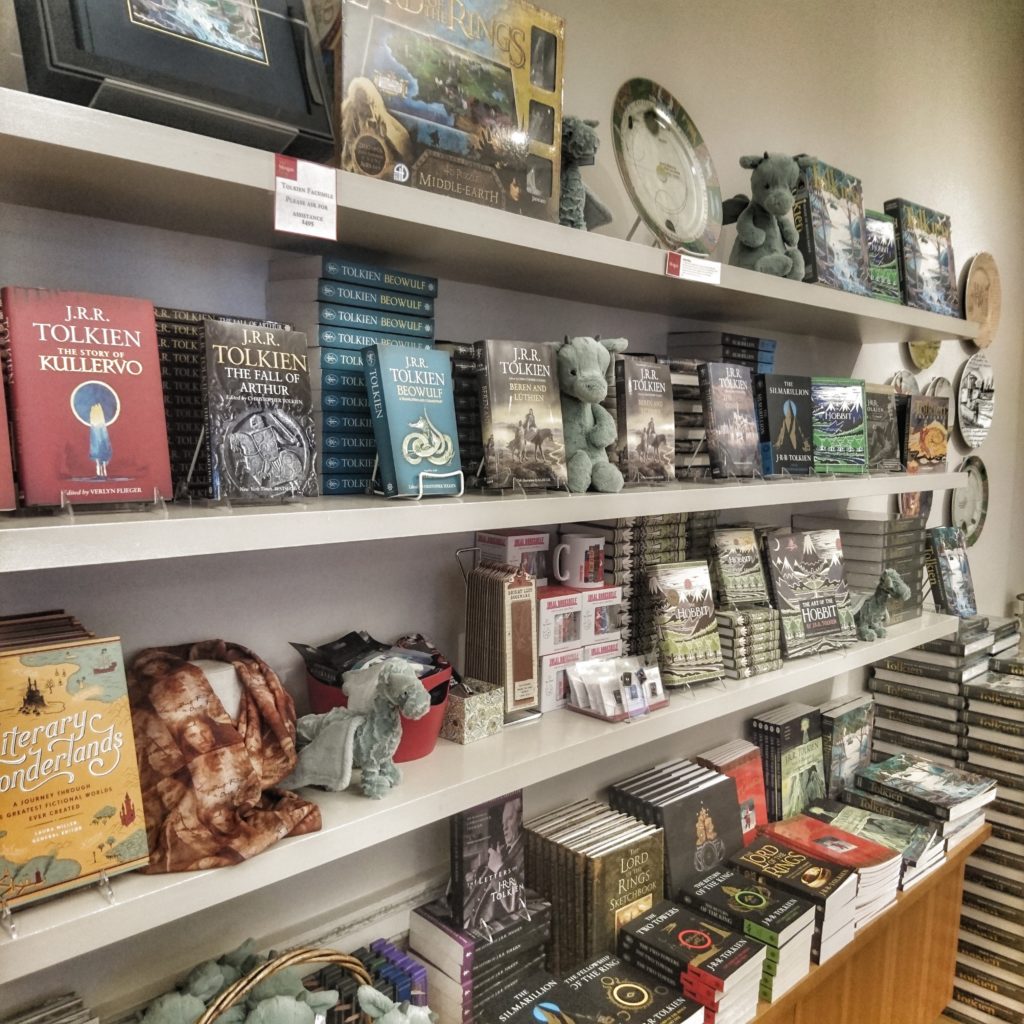 Celebrating the lord of ‘The Lord of the Rings’

(…) “Tolkien: Maker of Middle-earth” is varied, informative, accessible, and agreeable. It’s also nicely manageable in size: 117 items in one large-ish gallery, the space for temporary exhibitions on the second floor. Those items include letters, family photographs, drawings, books, manuscript pages, even a collection of Tolkien’s colored pencils and a tobacco tin full of pen nibs. Might that tin have originally contained pipe-weed?

The Morgan Library & Museum presents 117 original works by one of the world’s most beloved authors, J.R.R Tolkien, in the exhibition Tolkien: Maker of Middle-earth, now open in New York City.

The show is indeed a feast for the eyes, mind, and heart: family photos, teenage doodles on newspapers, meticulously handwritten letters, and artwork he’d made for his children, as Father Christmas; illustrations from The Hobbit; the original LOTR map, created from an accumulation of sheets taped together; a handwritten timeline of events for the LOTR trilogy, and dozens of illustrations, deftly using pencil, ink, and watercolor.

One Exhibit to Rule Them All

The exhibit proves that most Middle-earth fans are as invested in Tolkien the man as the lore itself. You’re unlikely to find a more polite museum crowd. Quiet visitors patiently waited in lines until their turn to get a close look at photographs from Tolkien’s childhood, to read love letters he wrote to his wife, or to get a look at his artwork and manuscripts. No one took photos of the displays, as is common in museums these days—it was as if the papers with sprawling script were delicate relics of Middle-earth itself.

J.R.R. Tolkien was a man obsessed. And the Morgan Library & Museum’s “Tolkien: Maker of Middle-earth,” the most extensive public display of original Tolkien material in decades, demonstrates the astonishing care with which he imagined his fantastical creations and their intricate world. Among the most fascinating objects: this map of Middle-earth that he used while writing The Lord of the Rings, which covers a larger area than the one included in the writings themselves. 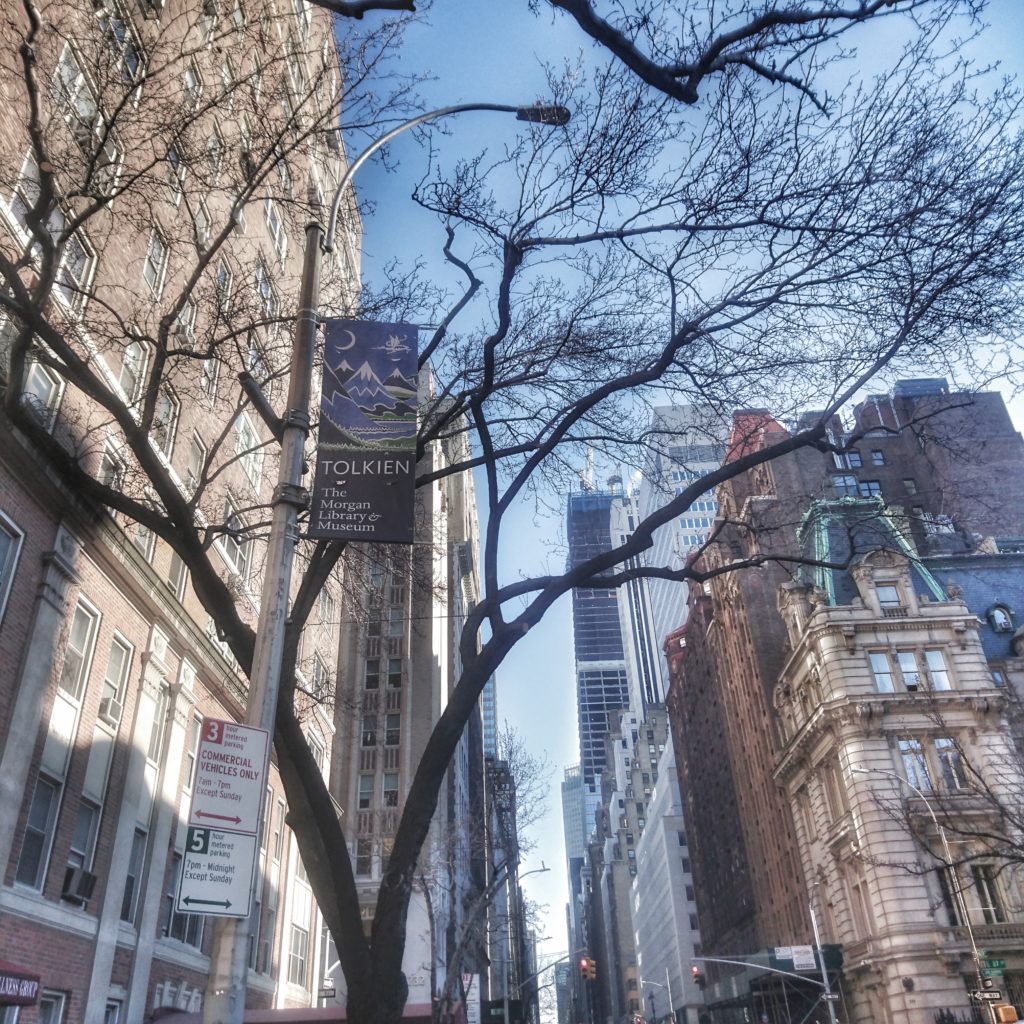 Tolkien’s first audience for his fantasies, besides himself, was his family. On the wall are Christmas cards from the 1930s, in which Tolkien has illustrated scenes of tiny demons, polar bears and Father Christmas. They look something like a mix between cartoons and illuminated medieval manuscripts. The script appears shaky, Father Christmas explains, because it’s cold at the North Pole. (Normally, Tolkien’s handwriting was unerringly straight, even and small.)

A Hobbit-sized exhibition about Tolkien as pipe-smoker and parent

What we get here, in short, are glimpses of the boundless creativity of J.R.R. Tolkien, not Peter Jackson, who made the films of the books by which most people know them. And, thank God, we don’t get a hint of the awfulness of poor Tolkien’s unintended legacy, which can roughly be summed up in the grim word ‘fantasy’ — games as well as rubbish children’s literature. We get the man and the writer. And that is enough.

Always thinking about the mythology he was inventing, Tolkien would draw on any paper that came to hand as he imagined the peoples and cultures of Middle-earth.

It cannot have been lost on the organizers that many Christians will see the show because they admire Tolkien as a man of faith who succeeded in a field largely dominated by those of none. This unwillingness to explore Tolkien’s Catholicism raises questions potential visitors may wish to take into consideration. While no one exhibition can hope to explore every aspect of an artist’s biography or output, of course, in this case it seems intellectually lazy, at best, to ignore such a crucially important factor in Tolkien’s personal life, philosophy, and work.

If There is Here, then the quest is, at least to some extent, foreordained. Combine this Catholic tenet with Tolkien’s keen interest in the fatalism and Götterdämmerung ending in Norse Mythology’s last lost battle, Ragnarok, and you arrive at the end of the time of the Elves, and the rise of the time of Man. Human beings, in Tolkien’s writings, are an easily corrupted species, with exponentially greater penchants for Elvish vanity and Dwarvish greed.

Intro video to the exhibition

Walk-through video of the exhibition

The inspiration for the conference was the importation to the Morgan Library, one of NYC’s more notable private museums, of the Bodleian’s fabulous Tolkien exhibit that it put on last year. The Morgan version is still going on through May 12, and I’d urge anyone interested who’s not already seen this to get there and do so.

The Tolkien exhibit at the Morgan Library was open to a free viewing by anyone attending the Saturday conference for an hour before it started, but I decided to avoid the crowds and the rush by coming in on Thursday. Not only was the exhibit smaller and hence more easily grasped than the monumental one in the Bodleian, it was also better lit. It occupies the single exhibit room up on the second floor of the building. I spent a couple hours wandering around it, taking it all in.

The first thing you see as soon as you get off the elevators is a hobbit hole! Definitely the perfect way to immerse yourself in Middle-earth. And you’re immediately thrust into a closer look at Tolkien’s life through letters, artwork and photographs. The exhibition is split into six sections: Elvish Origins, Home & Family, Sheer Invention, The Hobbit, The Lord of the Rings, and The Silmarillion. Each section is separated by colored walls giving you a clear way to navigate through the space.