Rankin/ Bass Productions’ “The Hobbit” and “Return of the King” remastered 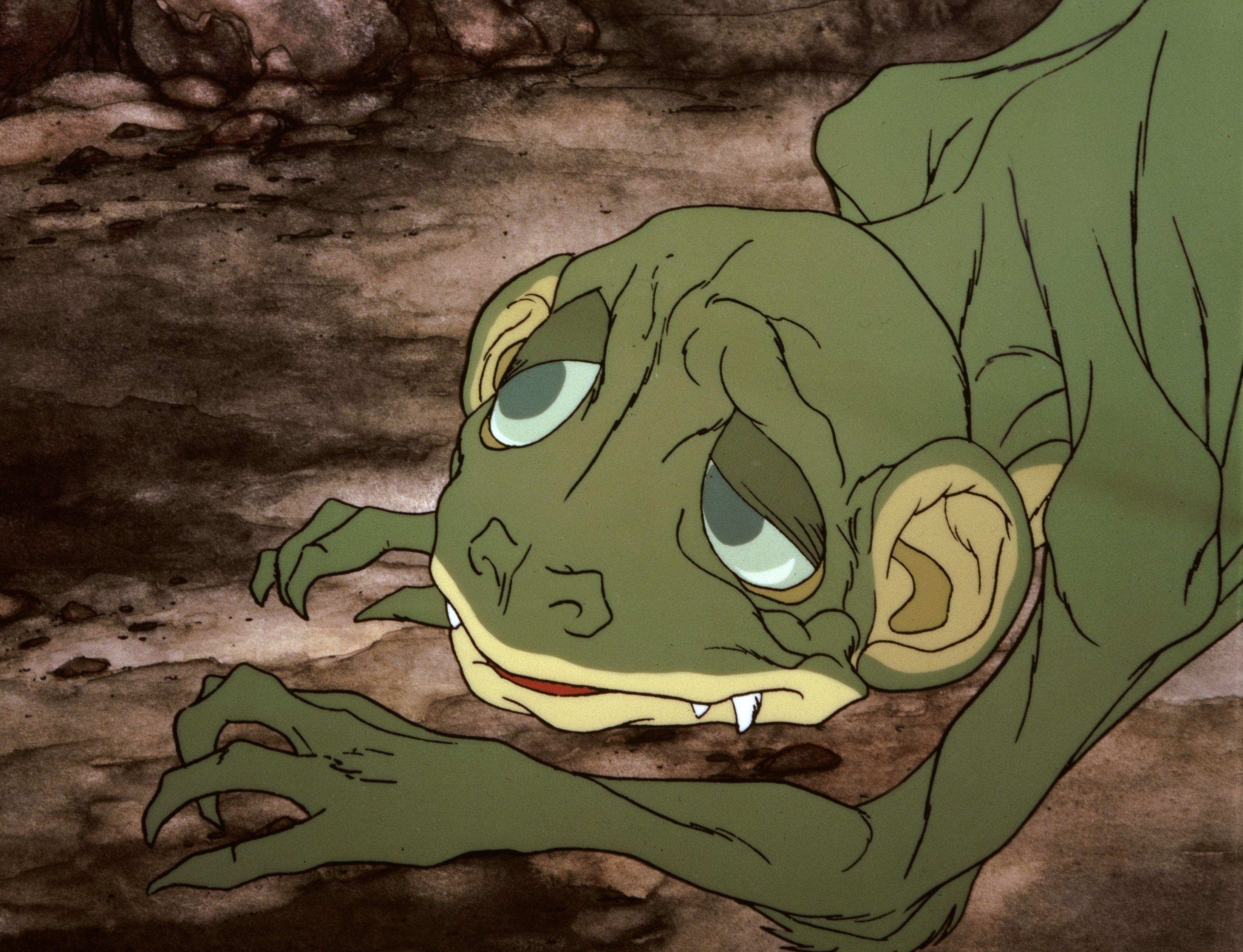 July 22, 2014 sees the release of digitally remastered versions of Rankin/Bass Productions’ animated television specials “The Hobbit” and “The Return of the King”. Time to reevaluate how films brought Tolkien’s worlds to life – decades before the Peter Jackson film trilogies and one week before the 60th anniversary of the publication of The Fellowship of the Ring by J.R.R. Tolkien. Let’s start – and sing!

This is certainly one of the most obvious differences – there is a lot of singing and some of it has become so legendary fans all over the world might start joining you when singing “Where there’s a whip there is a way!” However, let’s not get ahead of ourselves.

‘The Hobbit’ animated musical television special was first screened on November 27, 1977, with NBC, the year of the publication of The Silmarillion. It involves a large number of musical numbers written by Maury Laws, among them”The Greatest Adventure”, sung by folk legend Glenn Yarbrough, which was reprised with ‘The Return of the King.’

The Hobbit – filmed as a children’s story 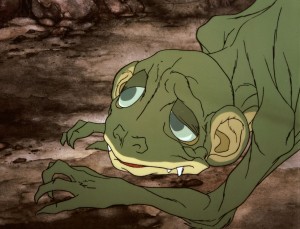 To have all those songs kept the atmosphere of a children’s story – it did not even ignore the Elven welcome to Rivendell (“O! tra-la-la-lally; here down in the valley!”) Yes, it did not include the Beorn episode, the Arkenstone is not really that important and Gandalf gives away quite a bit of his knowledge at the end but it did stick pretty closely to the book as published. (Yes, I know, there are many more changes – but not as many as with certain other films. Ah well, okay, there are _tons_ of changes but not as … Ah, forget it ;))

I do understand people get upset when the Great Goblin is able to eat a whole dwarf by simply opening his mouth (it isn’t always about size, you know!), the trolls do have huge tusks and Gollum really is a frog-like creature – but that is all due to the animation style by studio Topcraft.

Did you know ‘The Hobbit’ would bring us ‘The Last Unicorn’?

The animation team behind “The Hobbit” was called ‘Topcraft’ and worked extensively with Rankin Bass Productions. They would go on to do “The Return of the King” and, yes, “The Last Unicorn” as well. Although the studio kept very busy for many years it went bankrupt in 1985 – only to be bought and renamed as “Studio Ghibli” of “Princess Mononoke” and “Howl’s Moving Castle” fame.

An American cast for American viewers 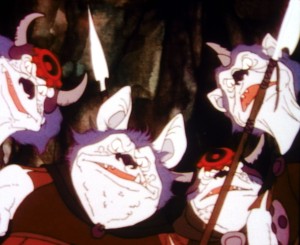 As much as it is a pleasure to see this film – including torch light Smaug (strangely reminiscent of the Jacksonian Red Eye) and Elrond, the runway-headband-light-wearing Elf – it was obviously meant to please an all-American audience with voice actors famous in the 50s and 60s with Hanna-Barbera and Disney productions (and not to forget, Rankin Bass were well-known for holiday-themed tv specials!) As such much of the original attraction is now lost to younger viewers but that doesn’t keep this film from being highly entertaining. I would recommend you to watch it because this is the first full-fledged film version of The Hobbit – and it is quite a pleasure! And no, it has nothing to do with the book.

Unpacking ‘Hobbit’ & ‘Return of the King’ 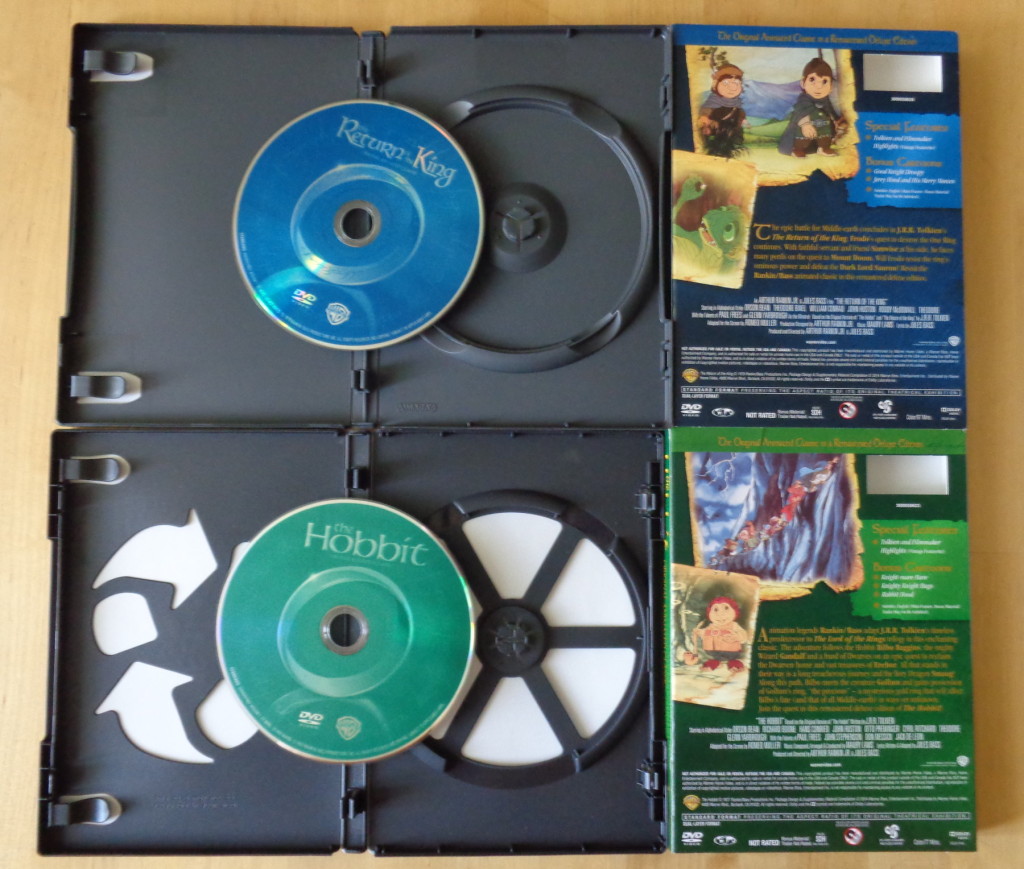 Unpacking Hobbit and Return of the King – digitally remastered versions 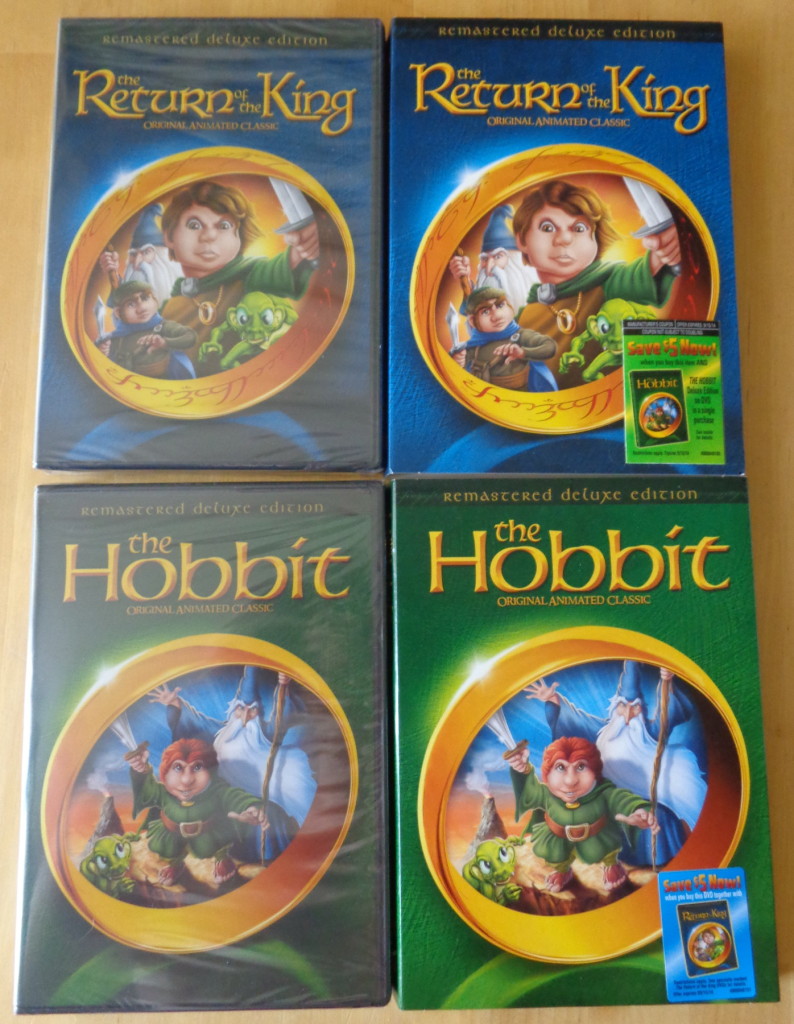 Languages: English; Subtitles: English (for the Deaf and Hard of Hearing)

The HOBBIT has been recommended to schools across the country by the National Education Association. As the NEA asserts ‘This is the first time that any work by J.R.R. Tolkien has been dramatized for television. He is one of the masters of modern literature whose world of fantasy has captured the imagination of readers of all ages in all parts of the world.'” (Source: Peabody Awards Collection, 1977 entry form.)

No information was given on the remastering process. The DVDs are Region 1 encoded; as such they can only be played on drives able to play this region. I cannot judge on the quality of the picture but the sound seems to have been improved. Again, I am not an expert on DVD remastering processes but both picture and sound are good enough to enjoy watching this. P.S. See the review link below for differences ins sound with the original television and then VHS version (see here for changes.)

Will the Video Version of Tolkien Be Hobbit Forming? Article with the New York Times.

TV Weekend: ‘The Hobbit’. Review with the New York Times.

Are there two versions of the 1977 ‘Hobbit’ animated movie? Discussion follow-up with TheOneRing.net.

Mimsy Review: The Hobbit. A great review detailing differences between earlier VHS versions and modern DVD ones. I can confirm the extra sound effects mentioned in this review usually happen with the songs and are missing from this ‘deluxe edition’; they might have been taken from the original soundtrack (losing the effects on the way.)

I would like to thank Warner Bros. for providing me with two review copies of these films. They sure are a treasure 🙂 P.S.: Yes, I’ll have a look at ‘Return of the King’ as soon as possible.