Today is one of the days when I tend to get a little melancholic.

On August 1st, 1997, me and a bunch of friends from uni celebrated the Inaugural Convocation of the German Tolkien Society at the Kyffhäuser Keller at Kyhffhäuserstraße 47, 50674 Köln, in the early evening.

Great speeches were given, a wide range of mostly alcoholic beverages was consumed, and the vaulted underground cellar of the then students’ bar heard many proclamations of dreams and visions what the German Tolkien Society could and should be (unfortunately, the bar is no longer there and even its last iteration, the Cubanito Cocktail Bar, seems to have fallen prey to the pandemic.)

Last weekend I participated in the GTS’ annual moot, the Tolkien Thing at the beautiful knights’ estate in Lützensömmern, Thuringia – report upcoming! – and finally bought a copy of the Chronik – the Chronicles – published in 2019, looking back at the first twenty years of the society.

It is a lovely memory in book form that gives you a myriad of pieces of information of what we had achieved in those twenty years but funnily enough the flash point of the – then future – existence of the second largest Tolkien Society in the world is missing (afaik, we are at the time of writing with 1,200+ members only second to our mother society in the UK) which you can more or less see in the photo above taken at the University College Hall on Oxford, taken in 1994.

So, let me tell you about this incredibly important moment in my life while listening to the Freddie Mercury Tribute Concert that arrived this morning, another essential part of my existence that happened thirty years ago (you can watch this great BBC documentary on the concert for free at Arte)  🥰 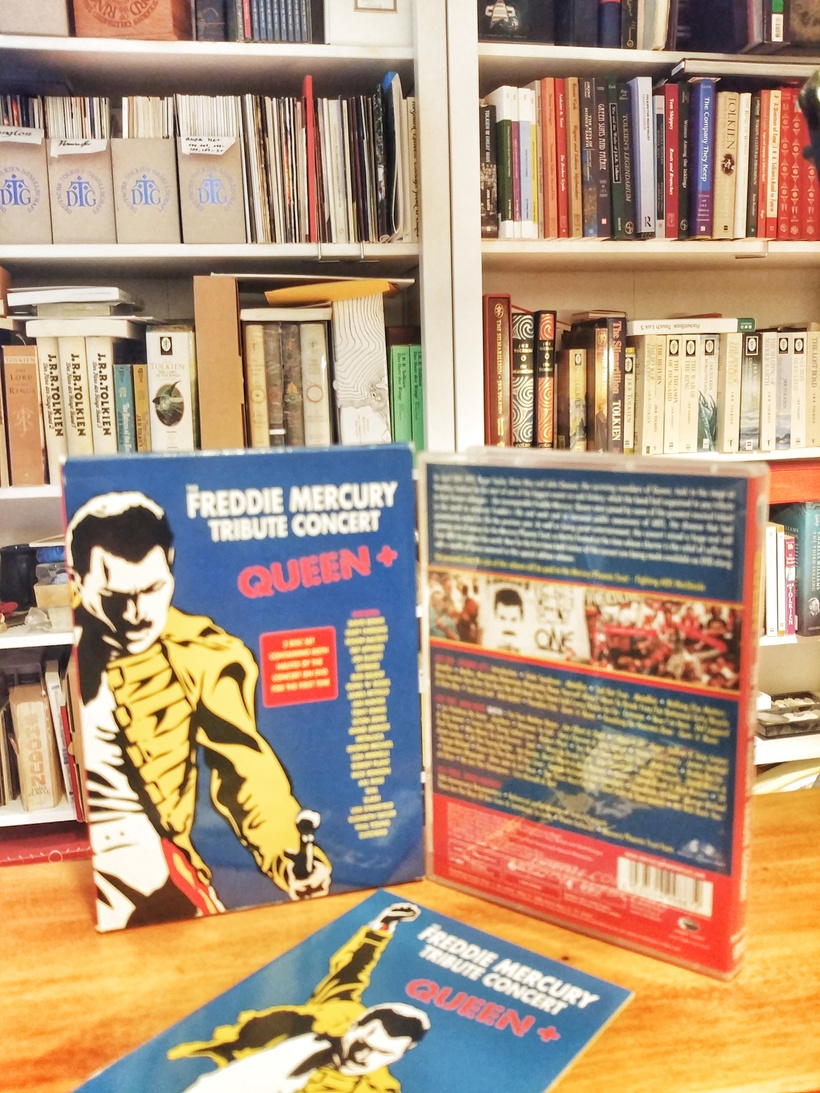 Yes, the very young person with the Monty Python Sings T-shirt was me at the age of 22, and this was my first ever Oxonmoot which happened from Sept 16-18, 1994.

I cannot even begin to tell what a life-changing experience this was for me. I had heard about the Tolkien Society, of course, having been its European Representative for some time, starting to contact fellow Tolkien fans across the continent but I had not really participated in an event of such magnitude.

I first met Priscilla Tolkien there, was invited into her home, visited the Professor’s grave for the first time, and learned about room parties. Yup, many of those, and the kind that will no longer happen these days, what with overblown campus security and other encumbering limitations of everyday life.

But then, tons of people squeezed into small rooms, music was played – it is an experience you do not forget when Ted Nasmith sings to an utterly silent room, to just give an idea -, silly first timer games were staged (marshmallows may have been involved), and I met a Finnish guy there who also was a first timer.

Now, I do not remember his name – shame on me! – but I do know that he and the country of Finland in general are basically single-handedly responsible for me founding the German Tolkien Society.

It is all Finland’s fault!

He had brought bottles of self-distilled vodka and had imbibed quite a bit of this particular drink when we were chatting in one of the many corners of one of the room parties when I asked him about how things were in Finland, and he, quite matter-of-factly said: “Well, we have eleven Tolkien societies in Finland!”

He wasn’t boasting, he just explained to me that basically every major city made the effort of having its own TS.

Please understand – Finland at the time had five million inhabitants.

A wee tiny country had eleven societes (by the way, I never tried to substantiate the claim he made – it just left me speechless at the time!) and Germany? None.

This, there and then, was the moment I decided this would have to change.

Please also note this did not happen as a case of misunderstood national pride or something but that weekend I had realised – and SEEN – that there were so many people coming together for the love of J.R.R. Tolkien’s life and works that I WANTED THIS MYSELF, in the place where I lived and studied.

I wanted other people to experience that kind of fun.

In 1994 at Oxonmoot I was just at the bar as usual, when suddenly a young guy came in, jumping around the room like a crazy kangaroo on acid, talking briefly to someone, and immediately hopping on to the next one. I also got a 30-second visit, and when he had disappeared again, I asked my British drinking companion who on earth he had been. ‘I don’t know, some German’ (…) [René von Rossenberg, owner of the Tolkienshop, in the CHRONIK.]

So, I started on making this a reality, first with a local special interest group in Cologne with the largest role-playing society of Germany, the Gilde der Fantasy-Rollenspieler e.V., to gauge interest in Tolkien, organise the first Tolkien Days, and when we had reached breaking point we then founded the society.

Above you can see the page from my 1997 diary stating TOLKIEN Gründungssitzung (Tolkien Inaugural Convocation) for Sept 1st, the title page of our first edition of our membership magazine, the Flammifer of Westernis, with most of the then committee members and the picture at University College (©️ thanks to Ian Collier).

My thanks go out to everyone who has been a part of this adventure. Not only because I could never have done it alone but because it provided me with the opportunity – and it seems, it is continuing to do so – of meeting some of the most wonderful people in the world. 😍