Not a Tolkien quote: “Is there any pleasure on earth as great as the circle of Christian friends by a good fire?”

"Is there any pleasure on earth as great as a circle of Christian friends by a fire?" Not a Tolkien Quote

In another edition of my ongoing Things J.R.R. Tolkien has never said, done, written or had anything to do with (TThnsdwohatdw) series I present you a quote that is so glaringly obviously not Tolkien that I am really at a loss why anybody would think that. Thank you, internet, this is not a Tolkien quote.

Is there any pleasure on earth as great as the circle of Christian friends by a good fire?

Well, it does sound nice, doesn’t it? And with Tolkien being a devout Christian known to be appreciative of fellowship, possibly including a good fire, a pipe and a pint who else could have possibly said that?

Yup. Clive Staples Lewis. C.S. Lewis. CSL. One of those friends who had a good fire in his rooms at Magdalen College, Oxford, and who would be sharing pints and pipes galore. 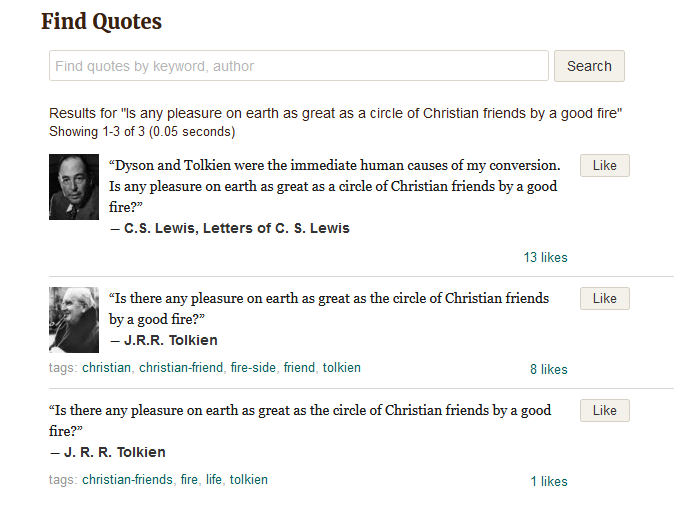 You may guess the site this comes from.

And it is, of course, a line taken out of context and quoted a little wrongly:

Williams, Dyson of Reading, & my brother (Anglicans) and Tolkien and my doctor, Havard (your church) are the ‘Inklings’ to whom my Problem of Pain was dedicated. We meet on Friday evening in my rooms: theoretically to talk about literature, but in fact nearly always to talk about something better. What I owe to them all is incalculable. Dyson and Tolkien were the immediate human causes of my own conversion. Is any pleasure on earth as great as a circle of Christian friends by a good fire?” [My emphasis]

It is, in fact, a much-quoted passage in C.S. Lewis circles as Lewis’ conversion was of the utmost importance to Lewis’ life – and Tolkien played a huge part in it.

Now, you might say: “Well, there are a number of search results when you quote it that way but Google seems to know it is by Lewis?” That depends on how you ask the question: Let me Google that for you. And if there are pictures on this then there is a chance that people will be misinformed – and yes, there are pictures with that quote.

So, there you go. Let’s hope that people will find THIS page instead of all the nonsensical others.