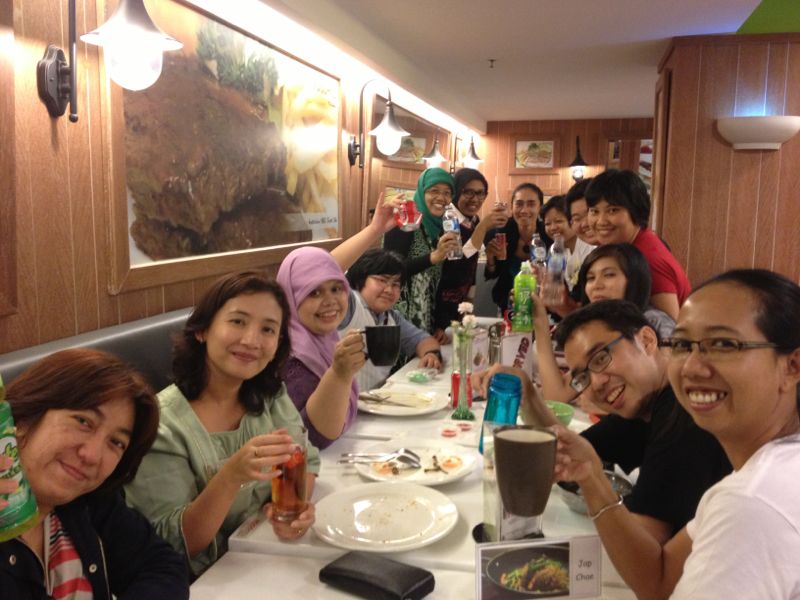 July 12th, 2013 was a special date for the Eorlingas, the Indonesian Tolkien Society: its tenth anniversary had to be celebrated in proper fashion and I am very happy to present you with an introductory text from Novia Stephani, one of the society’s admins, and some wonderful pictures of the activities of the Indonesian TS. To this very day the language barrier is a certain issue with any worldwide fan community and I am glad to see societies from all over the world are using the opportunity to present the fun things they do to a wider audience via the Tolkienist. Enjoy Eorlingas!

“Like in many non-English speaking countries, J.R.R.Tolkien’s The Lord of The Rings only gained popularity in Indonesia after the release of its cinematic adaptation by Peter Jackson. Though a number of people have read the book before the film hit the theaters, there as yet was no specific forum where Indonesian fans could discuss Middle-earth.

While the movie sparked discussions in various general forums, a particularly noteworthy one appeared as an out of topic thread in the Indonesian Harry Potter fan group. To accommodate the growing discussion, the group’s moderators then established a sister community, indo-lotr on yahoogroups in 2002. 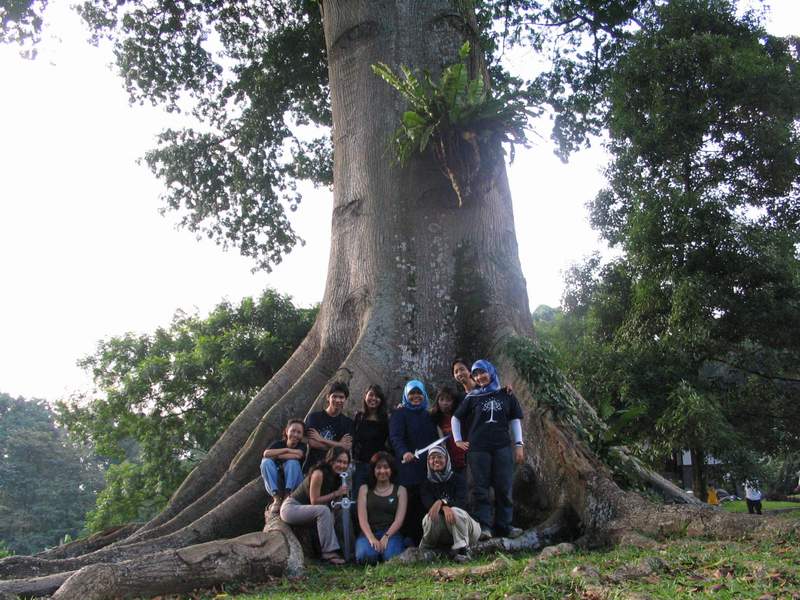 Eorlingas – Party Tree: This kapok tree at the Bogor Botanical Garden, fondly known as Mirkwood to Eorlingas members, was the closest thing to a mallorn tree we had. It grew straight for thirty meters, even more, before branching out. We held a couple of picnics here, including a Tengwar lesson, before we learned the tree had to be felled because a branch had fallen on a visitor.

Indo-lotr members came from all walks of life, from housewives to high school students, who hailed from major islands in the 17,000-isles archipelago. Distance is indeed a limiting factor for Indonesian fans to have more frequent meetings, when airfare from one end of the country to the other is more expensive than tickets to fly to neighboring countries. The online mailing list, therefore, is the only Middle-earth portal for many of the members, who may not know anyone in real life who share their passion.

Half a year later, two sisters Riri “Lúthien” Rafiani and Dini “Haleth” Nitihardjo issued invitations to literary communities, announcing the founding of an Indonesian Tolkien Club. The letter was forwarded from one such forum to indo-lotr. Thus the two initiatives, one with emphasis on online discussions and the other on offline activities, were bridged.

Eorlingas was founded at a community center for film enthusiasts, Gedung 28, on July 12, 2003. The name Eorlingas was chosen because Dini “Haleth” has special admiration for the people of Rohan and Riri “Lúthien” loves Tolkien’s description of the Rohirrim, delivered by Aragorn in The Two Towers:

“They are proud and willful, but they are true-hearted, generous in thought and deed; bold but not cruel; wise but unlearned, writing no books but singing many songs, after the manner of the children of Men before the Dark Years.”

Eorlingas’s activities include a lot of merrymaking sessions attended by members living in and around the capital city Jakarta. Members eat, drink, chat, show off their latest Middle-earth loot, plan movie screenings and have book discussions and Tengwar lessons. Since one of the missions of Eorlingas is to educate the public on the depth and richness of Tolkien’s works and how inspiring they can be, the group had also participated in academic and radio talkshows, as well as literary festivals such as the annual World Book Day event every April. Displaying Tolkien’s books and LOTR paraphernalia in booths inspired by Moria and Lothlórien, among others, Eorlingas drew stares, questions and a number of stray denizens of Middle-earth who were usually surprised to find fellow hardcore Tolkienites in Indonesia. 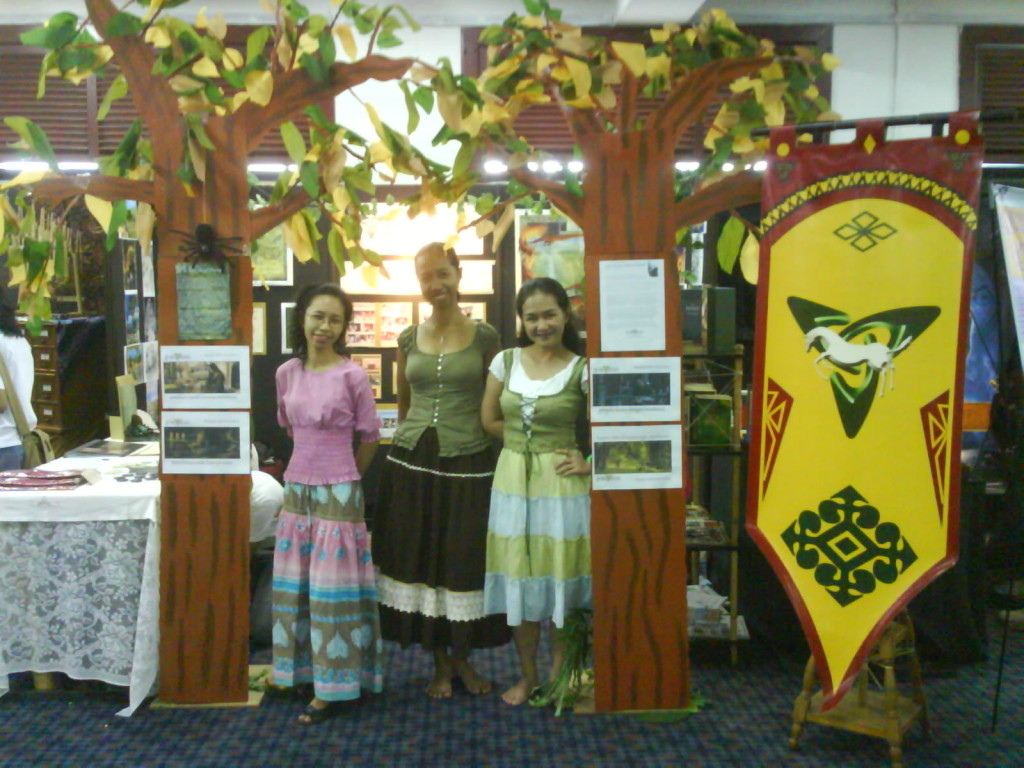 Meetups became few and far between in the intervening years between ROTK and the production of The Hobbit, due to personal activities and shifting interests. Though Eorlingas try to meet every January 3 to raise a glass in honor of the Professor, the years prior to The Hobbit marked a low ebb in the group’s activities both online and offline. The group indo-lotr, once a Khazad-dûm where people mined for camaraderie, fun and knowledgeable discussions, became a veritable Moria.

As the media hype around The Hobbit began to pick up, and making use of the increasingly popular social media like Facebook and Twitter, Eorlingas slowly began to stir from its years of slumber. The group’s foray into social media was not without their share of fits and starts. For one, most news sources for things Tolkien and Middle-earth-related are in English. It was some time before the founding members who were running the social media realized they got better responses when posts are made in Bahasa Indonesia, thus the effort to post more content in the local lingo. 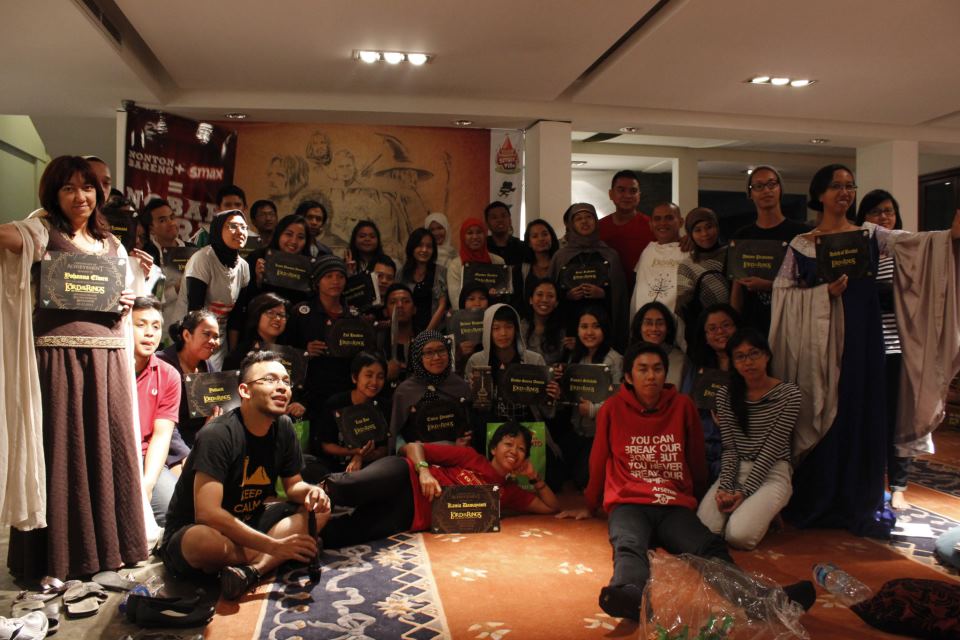 New members trickle in steadily afterward. Most of these are tweens who grew up watching LOTR. Their interests are more varied than the initial founding members with their penchant for poring over the books to find hidden gems in Tolkien’s works. While the younger members share their seniors’ fascination with Middle-earth, they are also consummate toys and movie props collectors, cosplayers, gamers, and artists. 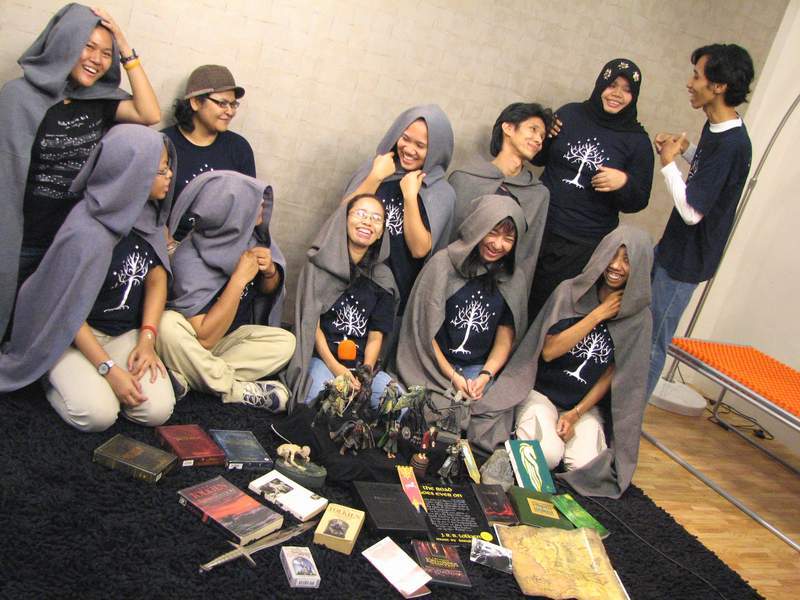 In the follow-up to The Hobbit: An Unexpected Journey, Eorlingas had organized a number of meetups marking special occasions like Tolkien’s birthday (January 3), Aragorn’s birthday (March 1), the elves New Year/Samwise’s birthday (April 6) and a trivia treasure hunt to win a copy of The Hobbit graphic novel (J.R.R. Tolkien, Charles Dixon, David Wenzel). In early June, Eorlingas took part in a festival celebrating fantasy in literature, organized by a school of English language. To mark its 10th anniversary on July 12, 2013, Eorlingas is holding a couplet writing contest, with prizes including a copy of The Hobbit, a CD of The Hobbit: An Unexpected Journey motion picture soundtrack, and leather bag tags bearing Tolkien’s quotes. A low-key get-together is scheduled for the anniversary proper, since, given that Indonesia is a predominantly muslim country, most members are observing the holy fasting month of Ramadan. A more elaborate party, meanwhile, is being planned to coincide with Bilbo and Frodo’s birthday in September.”

Special note on Tolkien’s works in Indonesia and their translation into Bahasa Indonesia
While The Hobbit and The Lord of the Rings have been translated into Bahasa Indonesia, it is certainly difficult to fully capture and convey Tolkien’s layered descriptions and dialogs, linguistics characteristics of different races, as well as the sheer scope and sweep of the history woven into the story, in Bahasa Indonesia.

Bahasa Indonesia, after all, is an amalgamation of several languages spoken by different tribes in the archipelago that used to be a Dutch colony, and which has been used as a unifying language with codified structure for less than a century. Its chief component is Malay, with elements borrowed from Arabic, Chinese, Sanskrit, Portuguese, Spanish, Dutch, English, as well as about half a dozen local languages. Depicting the distinctive use of Westron by the Rohirrim as opposed to the Gondorian, for instance, is a real challenge.

The contradiction between courtly Denethor and casual Pippin poses another problem. And since Bahasa Indonesia uses a gender neutral word for a human being and a masculine word for man, Glorfindel’s prophecy for the demise of the Witch-king of Angmar makes for some particularly tricky translation. While the rights to translate and publish The Silmarillion have been acquired for more than a decade, the book has yet to be published in Bahasa Indonesia, let alone more specialized works like Unfinished Tales, History of Middle-earth, or Letters of J.R.R. Tolkien. This means that a lot of the backstory touched on in The Hobbit and The Lord of the Rings –Gondolin, House of Finarfin, Eärendil, etc–which has been widely known by English-speaking fans is not readily available for Indonesian fans who do not read English.

This is what prompted several First Age members to circumvent the language barrier and share what they have learned of the history and peoples of Middle-earth from Tolkien’s as yet untranslated books, through essays and summaries posted in Eorlingas’s Facebook group. Questions are also answered in Bahasa Indonesia, with appropriate references from the books, in a series of “kultwit”, short for kuliah twitter–twitter lectures–that later are compiled for easy access.

If there are fellow Tolkien fans who are going to visit Indonesia, especially Jakarta, contact Eorlingas at the following channels. Mayhap we can meet at our local Prancing Pony or at the Bogor Botanical Gardens (dubbed Mirkwood for all the huge trees). 🙂