One exhibition to rule them all – Tolkien: Maker of Middle-earth in Oxford 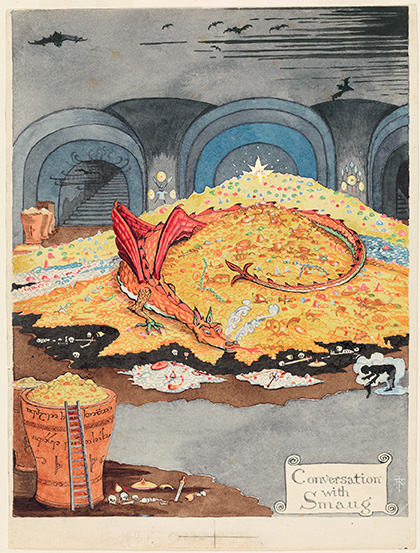 PLEASE NOTE: This exhibition is closed!

I started writing this blog post on June, 1st, 2018, quietly ensconced in Greens’ Café beside the Eagle & Child and I was struggling to find the right words to best explain the experience I had had during the opening of the exhibition. I know there are many people out there who have been inspired by the Professor’s life and works on many levels, in many ways of life and we all are a bit odd in a sense – the passion, the creativity, this sense of community being a Tolkien fan generates is not your everyday thing. 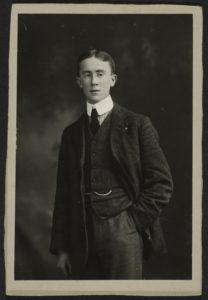 Now, I have been a Tolkienist for more than thirty years now, I have founded a literary society, regulars’ tables, students’ groups, online fora, mailing lists, fantasy film conventions, and I would assume by now that I have used the opportunities given to me to bring people together who truly appreciate J.R.R. Tolkien’s works in some shape or form. There is nothing I feel more privileged to do than spreading the joy – at least I have been trying for quite a few years now! – and because of this I had the honour of meeting incredibly knowledgeable scholars and fandom activists in the course of those years many of whom were present on May 31st, 2018.

To see all of them, to talk to them, introduce them to each other, finally meet friends in person you have never met before – it was breathtaking. Even with the major Tolkien conferences in 2005 and 2012 in Birmingham and Loughborough you did not seem to have those numbers of Tolkienists in one spot, to name just a few: Tom Shippey, John Garth, Brian Sibley, Alan Lee, Jane Johnson, many members of the Tolkien family including – not to say the least – Tolkien’s daughter Priscilla and Baillie Tolkien, Billett Potter, Carl Hostetter, David Bratman, Dimitra Fimi, Jason Fisher, Peter Gilliver, Jeremy Edmonds, Anders Bergström, Alan Reynolds, Andrew Ferguson, Pieter Collier, William Fliss and many more people who have been working in Tolkieniana behind the scenes, some of them for many decades now.

A dream come true – the ‘re-unification’ of the collections

The occasion of having all of them being together could not have been a better one. 26 years after the Bodleian Libraries’ last major exhibition on Tolkien in 1992 the team lead by Tolkien archivist Catherine McIlwaine had outdone itself in uniting a wealth of material much of which had never before been shown. The catalogue published with this exhibition is not only a masterpiece but also a hefty tome of over 400 pages, providing material that – again – had never before been published. 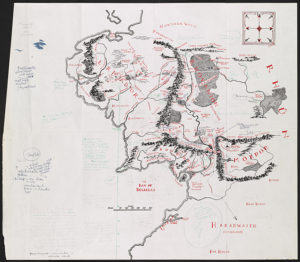 The main bulk of J.R.R. Tolkien’s papers is with the Bodleian Libraries in Oxford; however, Tolkien agreed to give the manuscripts of The Lord of the Rings, The Hobbit and Farmer Giles of Ham to the Raynor Memorial Libraries at Marquette University for preservation. Seeing all of this material together in one spot had finally become a reality and it was a truly unique opportunity to see and compare them, to get a feeling for the links in the development of Tolkien’s creative ventures.

The scope and size of Tolkien: Maker of Middle-earth

This was a special exhibition hosted in the ST Lee Gallery at the Weston Library on Oxford’s Broad Street (for more information on this library masterpiece’s refurbishment finished in 2015/6 see this and this article.) Do not expect the size you would think of in terms of a regular exhibition space – this was an unique occasion and for exhibitions such as this there are dedicated spaces which can be changed and adapted on a smaller scale. 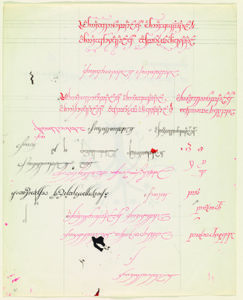 However, ‘small’ was not the right word in this particular case as the sheer amount of information presented both in terms of what was being provided by the curator and by Tolkien’s creative output was well beyond the usually alloted thirty minutes for a visit. To get the full image you had to go in several times, indeed. But even with only half an hour the letters, illustrations, books and paraphernalia offered new and exciting insights.

There is only so much you can understand from a printed book. Seeing the many stages of development, particularly with extraordinary stories such as The Lord of the Rings, The Hobbit and The Silmarillion will make it much clearer how much work and what levels of creativity were needed to finally publish them. To many visitors it came as a surprise how detailed the maps drawn by Tolkien were or that he was a very talented illustrator and calligrapher, using Conté polychrome pencils and Reeves and Sons colours. Seeing the evolving versions of the single most famous fantasy map is spectacular. 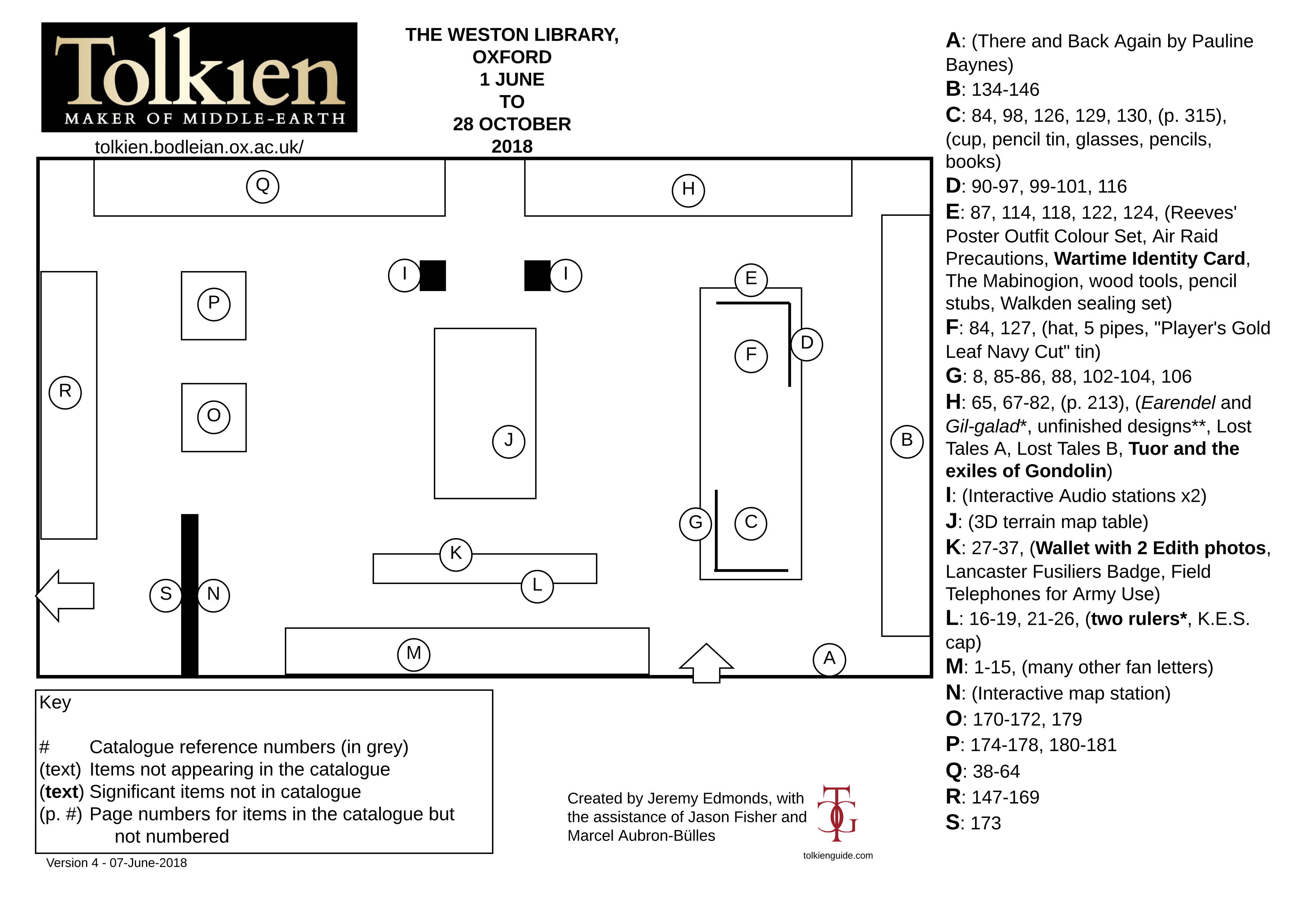 Reading Tolkien offered insights into the reactions of fans to Tolkien’s work. Among the exhibits were letters from a certain Terence Pratchett, W.H. Auden, Iris Murdoch, Chuck and Joni Mitchell, Margrethe, Princess of Denmark, and even a Sam Gamgee who was surprised to find his name was being used in a book.

Childhood started out in Bloemfontein, South Africa, pictures of the family, and early sketches by Tolkien himself.

Student Days offered some of the most hilarious items in the exhibition, including Tolkien’s programme design for an Exeter College Smoker – four seemingly rather drunk gentlemen walking down Turl Street towards today’s Lincoln College’s library tower; his sub-rector’s report card stating Tolkien to be “V lazy & warned re exhibn.” and his ‘account book’ in which he listed all of the proper studying he had done in exchange for kisses of his girlfriend Edith. 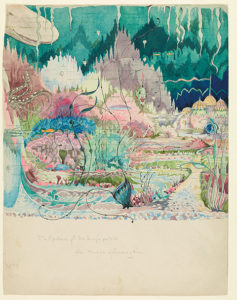 The Gardens of the Merking’s palace © Tolkien Trust 1992

Sheer Inventions showed the growth of a young artist with unusually titled works such as Eeriness, The Book of Ishness, Owlamoo and, of course, The Garden of the Merking’s Palace. This was one of the categories that surprised many visitors who had not known about Tolkien’s more artistic ventures beyond writing.

The Silmarillion offered insights into the development of his magnum opus. Among those were ‘I Vene Kemen’ – ‘The Map of the Ship of the World’, the first Silmarillion map, or ‘Glórund sets forth to seek Túrin.’ Again, the delicacy of both calligraphy, sketches and paining amazed everyone who came to see the exhibition.

The Professor’s Study was in my eyes the most fascinating and interesting part of the exhibition as this was the place where you could ‘watch’ JRRT work – a selection of his library, pipes, a hat, a tin of his tobacco and a Windsor chair he sat in. But there also were elements of his family life, some of his Father Christmas work, the water colours he used, a sealing set etc. If you had the imagination you could think of a scene of the Professor sitting in his chair, sitting at his desk, smoking a pipe, working on research and one of his children running into his study …

Mapping The Lord of the Rings may very well be the favourite for a majority of fans as it showed the development of the most famous of all fantasy maps.

A 3D map of the travels of the Fellowship

Another highlight of the exhibition was a 3D model of Middle-earth with which you could follow the paths of the Fellowship. Differently coloured lines snaked over the lands of Middle-earth, projected onto a modelled surface. It was stunningly done and the only critique I could offer is that the animation stopped directly after the destruction of the Master Ring only to start anew.

Please visit the website of my friend Jeremy Edmondson at TolkienGuide.com for more information on the exhibition in Oxford and New York City.

Please consider getting the outstanding exhibition catalogue as it is way more than just a printed version of explanatory texts – it is filled with essays by leading Tolkien scholars and excellent context for the exhibits.

Please consider getting some of the seriously awesome Tolkien swag from the Bodleian Libraries Shop. I promise, it will make you happy!

And last but not least – thank you to everyone involved who made this exhibition happen.