Now that I have found this audio option with Patreon I will definitely use it more often in the future. And I am pretty sure you would like to know why I am using it in this manner.

This particular song by artist Beate – her name at the time was Beate Lischka – is one of the oddest little pieces in my collection. And I can promise you this Radio Mix of her eponymous and utterly unknown non-hit Kleiner Hobbit is nothing in comparison to the “Dream of Scream” Mix or the Energy Mix. Please do not make me provide you with an excerpt to those two, they are prime examples to what was wrong with 90s dance music. There was nothing wrong with 90s dance music if you ask me but exceptions applied!

Little Hobbit, go forth,
Do no longer seek your fortune at home,
Adventures abound, face them head on.
Little Hobbit, big hero,
Now off into the wide world,
There’s plenty for a master burglar to do.

You may be asking yourself what this has to do with a Hobbit stage adaptation and I will get to that in a minute.

Let me just mention that in the course of many years my partners noticed fairly quickly that Tolkien, well, does play a part in my life. This may be the understatement of the century but I guess you know what I mean.

They often tried to do me a favour and my then girlfriend Katrin is from the Sauerland, a region not too far away to the east of Cologne where we both studied English Literature & Linguistics and were fellow students’ representatives. Incidentally, many years later she was the leading editor for the translation of 1000 Places To See Before You Die in which I did Eastern and Southeast Asia so you truly always meet twice in life 🙂

Anyway, as a girl from the Sauerland she knew a lot of places of cultural importance and she invited me to come along to the Balve Cave. Yes, the biggest cave used as a cultural venue in Europe. Basically a massively oversized hobbit hole. Without the round doors and windows. And no hobbits, except on occasion. 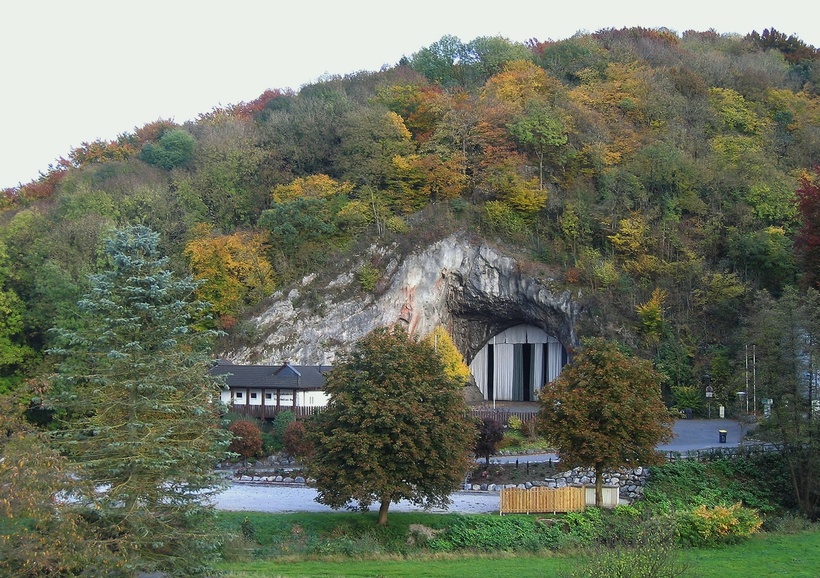 There have been events for decades now in the Balve Cave and one of their specialties are fairy tales and children’s literature renditions as the Festspiele. And guess what – they did The Hobbit in 1996.

And that’s when Katrin invited me – as a surprise. And a surprise it was, very much so. And there were even more surprises in stock for me.

I only found out many years later that this stage adaptation was based on the 199 pages strong manuscript by Barbara Hass of the long-standing Theater für Kinder in Hamburg, published with the Verlag für Kindertheater and first performed on February 8th, 1994. Its original set design was by Angerer der Ältere, a Bavarian artist probably best known as the conceptual artist to The NeverEnding Story II: The Next Chapter. I did not see the Hamburg edition but I went to see the Balve Cave rendition on May 16th, 1996. 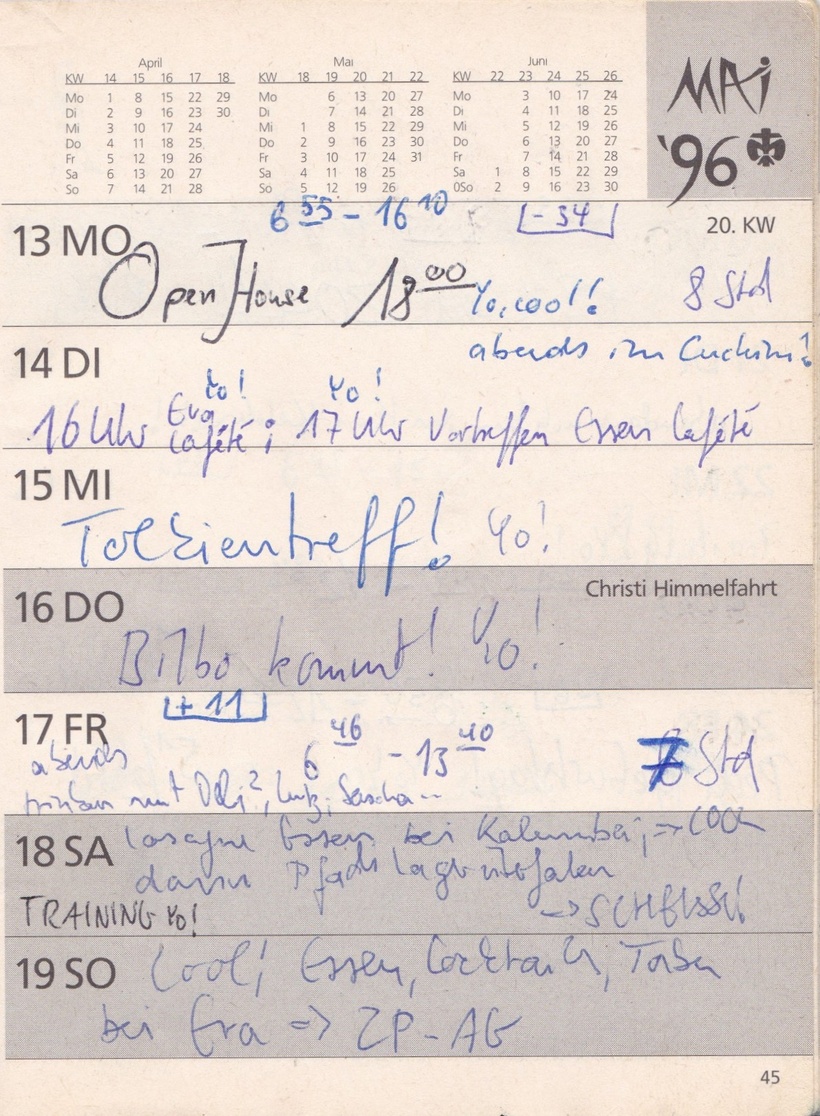 This is a page from my 1996 Scouts diary; the symbol on the top right by the 96 is of the Deutsche Pfadfinderschaft Sankt Georg in which I was an active member at the time.

To show you how everything I ever did in my life had a link to Tolkien – three years later the first ever Tolkien Thing (the main annual event to the German Tolkien Society and its members) happened at the DPSG‘s very own conference center that is the only building in all of Cologne with a facade resembling an Oxford University college and it was home to the Colognian regulars’ table for many years, too.

Back to the matter at hand. Please ignore the many yos and cools on the diary page. Thank you.

This line in my diary may now sound more plausible after having heard the first fourty seconds of Beate’s smash hit. It was not used during the play, if I remember correctly, only afterwards when you could buy merchandise to support the event and the Balve Cave. And buy I did. On Ascension Day.

I needed to buy something to never forget what I had just seen. It was an out-of-body experience, so otherworldly I simply did not know how to handle it. I will give you some suggestions what I had seen:

– The Ensemble was made up mainly of very young actors, often underage. Nothing wrong with that unless Bilbo, played by the artist of the title page of the music CD, Tom Ende, was so OVERexaggerating things that the gentle hobbit seemed to be in a continous hissy or laughing fit.

– there was Gollum, the green monster. Yup. Did you have a look at the title page to the CD? Yup, green. 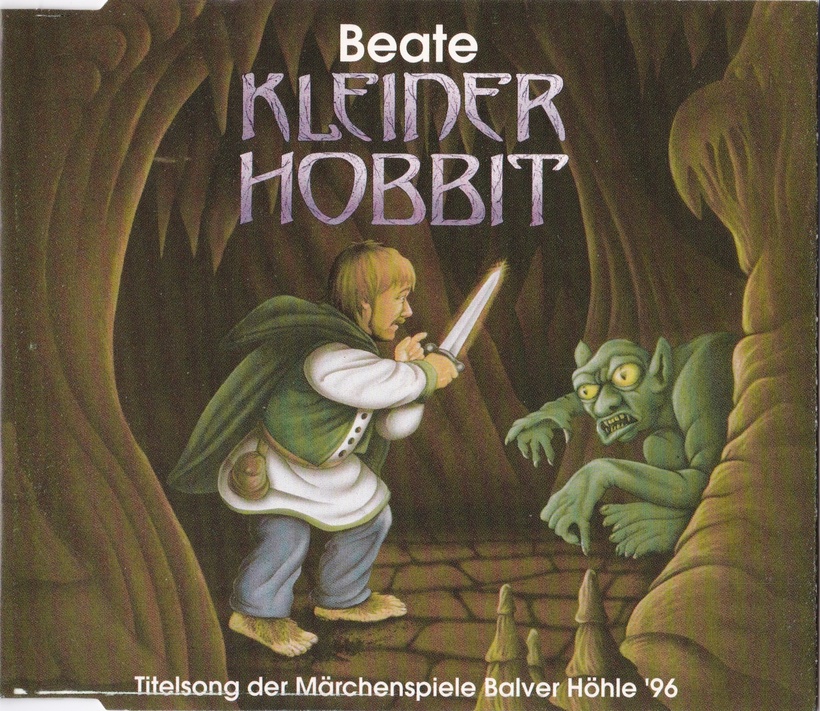 – There were eight Dwarves. Thorin Oakenshield, Balin, Bombur, Oin, Gloin, Kili, Fili, Dain. So, actually there were only seven to the company. And when they are with Smaug only five of them were left, iirc. I assume the actors had to double for several roles and that is why they had to shift roles continously (Kili was also an orc, Fili an orc, Oin a wood-elf.)

– The Orcs were Bolg, an Orc warrior, a Little Orc. And unnamed Orcs. No Great Goblin, in case you were wondering

– The Wood-elves had a Queen and I think she was called Tee-noo-feel. Yup. One (named) Wood-elf. Unnamed wood-elves. They were wielding what looked like Spanish Conquistadores’ halberds. 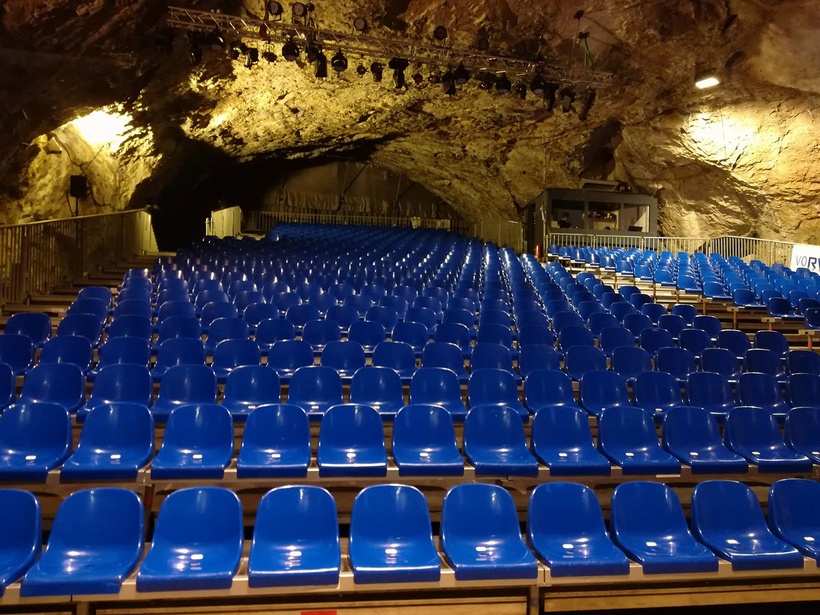 So what was good about the stage adaptation?

It was an amateur piece done with passion and quite a bit of ingenuity. Imagine sitting in a really cold cave and watching a play done by very, very young actors and actresses who often played two parts and also did work behind the curtain as costume designer, make-up artist or set decorator.

A play the target audience of which was young kids who enjoyed themselves immensely throughout the story so it did what it set out to do.

Smaug was excellent as he should be and the bustling dwarves made for a lot of laughs.

Looking back I have to thank Katrin for taking me to see this play – I would not have missed it for the world. And that is why I am sharing this with you today!

[The Balve Cave did this play again in 2013 as a certain film trilogy came out. In Germany quite a few people may know the cave as it was the setting to one of the most successful live shows of the Fantastischen Vier, one of our country’s most successful hip hop groups.]